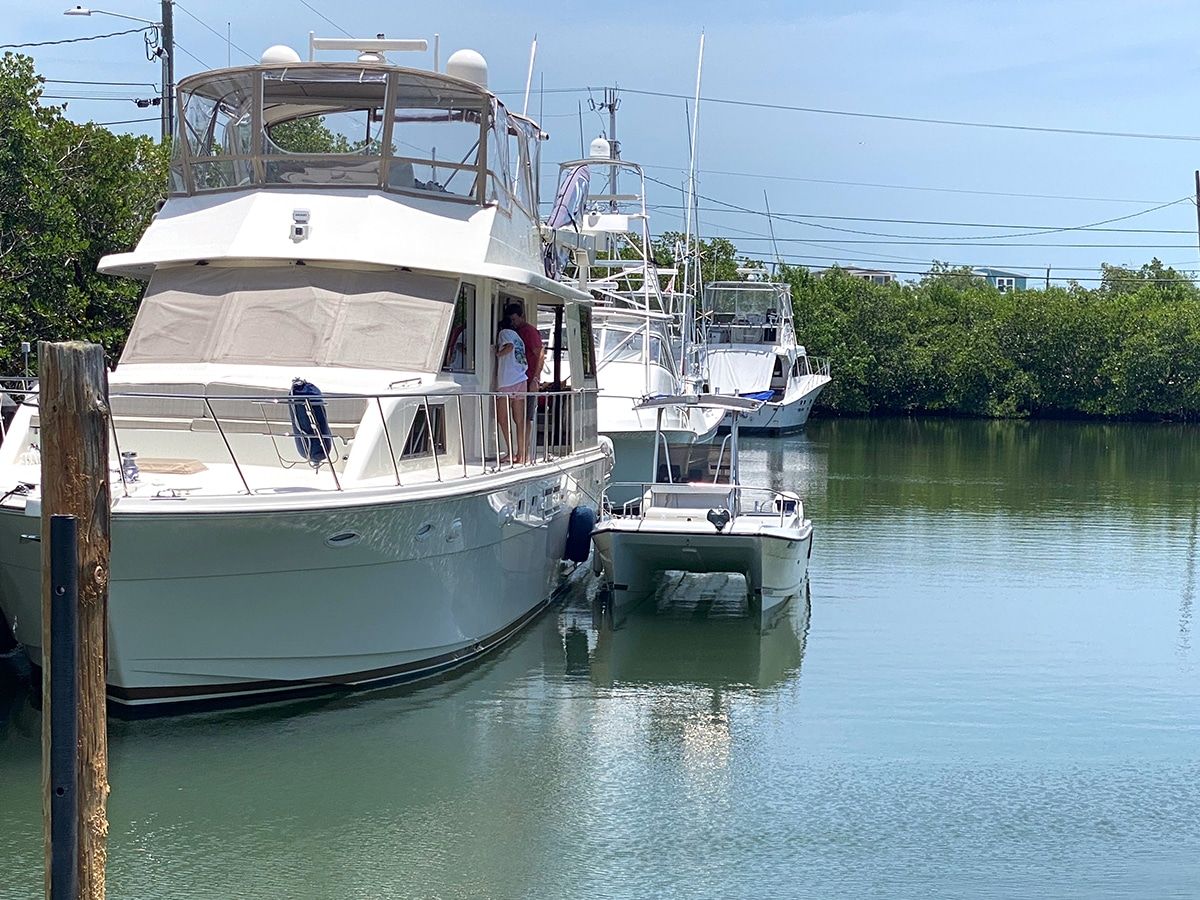 White Marlin Marina is tucked away on Coco Plum Drive when you first enter Marathon from the Grassy Key stretch. If you blink, you may not notice that it’s there. And that’s just fine with new manager/dock master Jay Rosengren and assistant manager Laura Drew — who also happen to be a just-engaged couple. Rosengren proposed to Drew in the marina’s tiki hut last year.

“This is the best hidden gem,” said Drew. “We have a park with grass, a tiki hut, a firepit. But no one knows we’re here.”

The couple want to change that — at least a little bit — and let the community know that new owners bought the marina in August 2020: Ro and Charles “Shorty” Whittington along with their son John. Planned changes include a new pool and bathhouse, to go with the current amenities. Along with the tiki hut that is complete with surround sound and a large screen TV, the marina has a firepit, two grills, a hammock and lounge chairs in the quiet resort-like setting with pastel-colored signs that point to Bimini.

The 27-slip marina is such a perfect secluded place for a party, that Rosengren proposed to Drew at a gathering in the tiki hut last March, putting a pin in their decision to move to Marathon permanently from Michigan and run the marina.

In November 2020, the couple was taking an east coast trip with their boat from their home in Michigan when they unexpectedly sought a mooring at the marina due to Hurricane Eta.

They fell in love with the community at the marina, which typically has the same boaters come every year. Then Rosengren learned that a staff position was open that took advantage of his customer service experience in insurance sales and property management skills. Even better, when the Whittingtons said last March that the manager/dockmaster position opened up, he threw his hat in the ring and got the job. And with her longtime background running GM car dealerships in Detroit, Drew was perfect for the assistant manager job to help with the customers.

“We’re not just a clean restroom and somewhere to moor or dock,” explained Drew. “It’s about a personal experience. I meet every single boater who comes in this place, even if it’s just two minutes on the boat ramp. We want to deliver an excellent experience.”

Rosengren pointed out that the couple will drive boaters to pick up a rental car — or even run out to buy Gatorade for a crew who recently came down with the stomach flu.

“We’re not the cheapest,” said Drew. “But I do believe an excellent experience will supersede the cost.”

“We can launch, store your trailer and slip your boat all on the same property. Not too many places have trailer storage,” said Rosengren.

The marina tends to have a waiting list for its 27 slips between November and April, and that suits the managers and the owners. “We want to remain small and private,” said Drew.