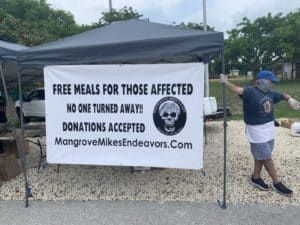 WE’RE THINKING OF YOU, MIKE

“We need to take care of each other.” Those were the words echoed by Mike Forster as he sat down with Harriette’s owner Carlos Hernandez and Key Lime Tree owner Violet Wahba in early April 2020 to discuss a plan to provide some 200 meals daily to Upper Keys residents from Harriette’s.

Forster was several weeks into a hot meal distribution outside his closed Mangrove Mike’s Cafe in Islamorada. A restaurant serving up arguably one of the best breakfasts quickly shifted to a kitchen that served an Upper Keys community in need. A COVID-19 outbreak in early 2020 forced a service industry into complete closure, leaving many local workers without a paycheck and the ability to put food on their families’ tables.

In times of severe uncertainty, from March 2020 to earlier this year, also came moments that showed what the Keys community can do and be when joining for a greater good. As Mike Forster would term it, “we’re better together.”

What began as a hot meal distribution outside Forster’s closed Islamorada cafe would evolve into something bigger, with help from businesses and community members in the Keys. Midday meals for the Upper Keys community would go on for weeks and months at his cafe, thanks to the many donations from the community and Forster’s nonprofit, Mangrove Mike’s Endeavors. And help from larger groups like Cargill’s Miami facility would provide nearly 10,000 pounds of protein to support the local food drive, which would soon expand as far north as Key Largo and as far south as Bahama Village.

Local residents couldn’t help but get behind Forster’s community feeding effort. Volunteers dished out meals to people dropping by the cafe, while others would deliver to the homes of the elderly, the single parent and the families with multiple children.

A food drive right before Christmas would see hundreds of turkeys and produce boxes distributed at handout sites at Key Largo School and Marathon’s community park. Students, sheriff’s deputies, elected officials and other community members came out in droves to volunteer, sharing smiles with grateful recipients now able to feed loved ones.

“You see the camaraderie of the people who are handing out the food and how we love what we’re doing in giving back to our community,” Forster told the Keys Weekly. Donations reached nearly $300,000 in the first seven weeks when COVID hit.

Forster’s time and energy were expended day-in and day-out to ensure food reached the hands of those in need. At times, it required him to get up during the early morning hours and work well into the evening.

“We have a lot of employees who are out of work and don’t have a paycheck coming this week or next week,” he said. “This is what we need to do to be a united, compassionate community.”

He led by example, drawing many people from all walks of life and organizations throughout the Keys communities to step up, volunteer and help their fellow neighbors.

His unwavering support for the community during tough times is undoubted. Now, Forster needs our prayers and well wishes as he continues to battle COVID-19. Forster, who tested positive on Aug. 15, was admitted to Mariners Hospital. He was then transported to a Baptist Health South Florida hospital in Miami where he’s currently intubated.

Prayers and well wishes for Forster are flowing in, as many in the Keys community watch closely for daily Facebook updates provided by Pastor Tony Hammon. The latest posts have brought encouraging news, with Forster’s blood oxygen level at 97%. But the prayers are still needed.

We’re thinking of you, Mike. Stay strong and get back to this community that truly appreciates all you’ve done.