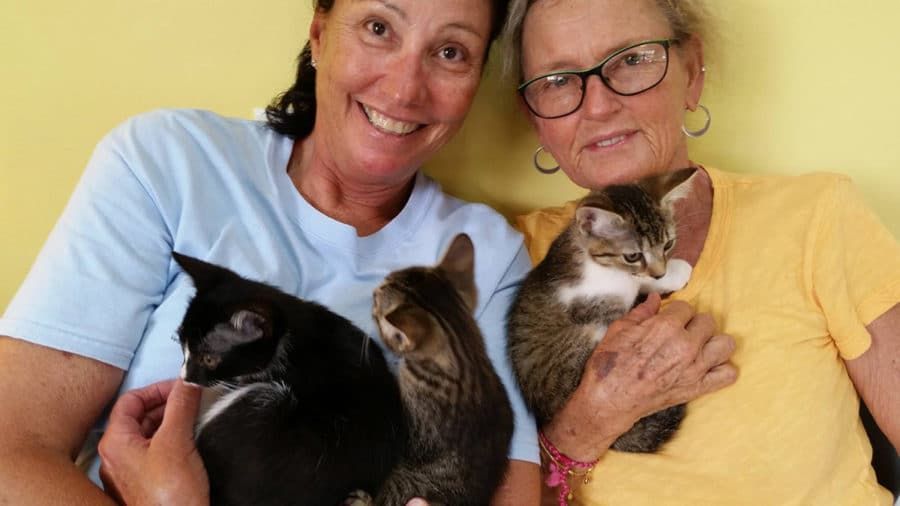 For decades, Sharon Mahoney-Ellenwood has been working tirelessly through her nonprofit Casting for Cats to raise money with fishing tournaments and use the funds to control feral/abandoned cat populations.

Her partner has been Margie Schwartz of Whiskers & Paws Forever of Monroe County, another charity. For the past 20 years, this dynamic duo has been joining forces for one goal: stabilizing the vulnerable cat population through spaying and neutering.

“This method works,” Mahoney told Keys Weekly. They have stabilized groups of cats at many locations up and down the Keys.

“There used to be 50 cats behind the Trading Post. Also we’ve helped Enchanted Forest, Smuggler’s Cove, behind Chef Michaels … I can go on and on and on,” said Schwartz.

“Winn-Dixie is now stable,” agreed Mahoney. “If you trap the cats, spay and neuter them, then release them, the group will stabilize and eventually dissolve. There are different fields of thoughts. Some people feel feral cats should be euthanized. But I believe they should have a chance.”

The sheer numbers that the pair have taken care of speak for themselves: “Over 20 years, we have spayed and neutered 5,000 cats. Easily,” said Schwartz.

Unfortunately, the number of cats behind the Key Largo Publix has grown exponentially during the pandemic, so much that locals have called Mahoney and Schwartz for help.

“That’s the bad area right now,” said Mahoney. “People have been calling us like, ‘Where have you ladies been?’ But we’ve never stopped. It’s just that during the pandemic, people have been dumping cats behind Publix.”

In fact, last year during the pandemic, the women spayed and neutered 283 cats.

But the duo has hit a stumbling block. First off, the job is physically demanding. The two women — many times alone — trap the cats; take them to vets for shots, tests and spay/neuter; then transport them back to Schwartz’s house for surgery after-care, hopefully leading to adoption at stores such as Keys Kritters in Key Largo and Whalton’s Pet Shop in Marathon.

And money is becoming a problem. The duo are extremely grateful for all the help from veterinary clinics over the years. In the past, local clinics have been able to give Casting for Cats and Whiskers & Paws a discounted price. But, according to Mahoney, recently the clinics have been bought out by big chains, and though they still generously provide help, the discounts aren’t as low as they used to be.

The women have come to a realization about the feral/homeless cat population. “This is Monroe County’s problem,” said Mahoney. “This is not our problem. If I had to describe it, it’s like a hamster wheel. But we’re still at the same point we were at 20 years ago.”

Schwartz and Mahoney emphasize that they are very grateful for all the help from Monroe County and give special props to Marsha Garrettson, manager of the Key Largo Animal Shelter for Monroe County. They feel they’ve also been able to have discussions with Assistant County Administrator Kevin Wilson about this issue, as well as County Commissioner Mike Forster.

But Schwartz and Mahoney need still more help. “We’re at our wits end about what we’re going to do,” said Mahoney. “I’d like to pass the torch with somebody. I’d like to sit down with Marsha Garrettson, Kevin Wilson and county commissioners and figure out a solution. We don’t need to partner with them. I’m trying to find a path that keeps everyone happy.”

One solution that the women have thought of is raising money through the Casting for Cats fishing tournaments to buy a truck or a van, fitting it out with spay and neuter equipment, and hiring a vet team to run the temporary clinic. This may be a more cost-effective solution than hunting down lower spay/neuter discount rates, which are ever more difficult to find.

“I have no problem raising money for a unit like this,” said Mahoney. “But physically, it’s becoming overwhelming.”

Casting for Cats is now in its 20th year of its twice-a-year women’s tournaments. And now Mahoney has opened a resale store called Casting for Cats Second Chance on the same premises as her floral shop, the Enchanted Florist, at 82897 Overseas Hwy., Islamorada. All money from the sale of items like new and gently used fishing poles, kitchen appliances, clothes and home decor goes to spaying and neutering cats.

But the hamster wheel has started to spin again. Last week, Schwartz put a post on her Facebook page: “And so it begins. It’s kitten season.”

Mahoney and Schwartz are open to any thoughts, suggestions and ideas the community may have, and they would love for readers to visit the store. Feel free to call or leave a message at 305-664-2012.