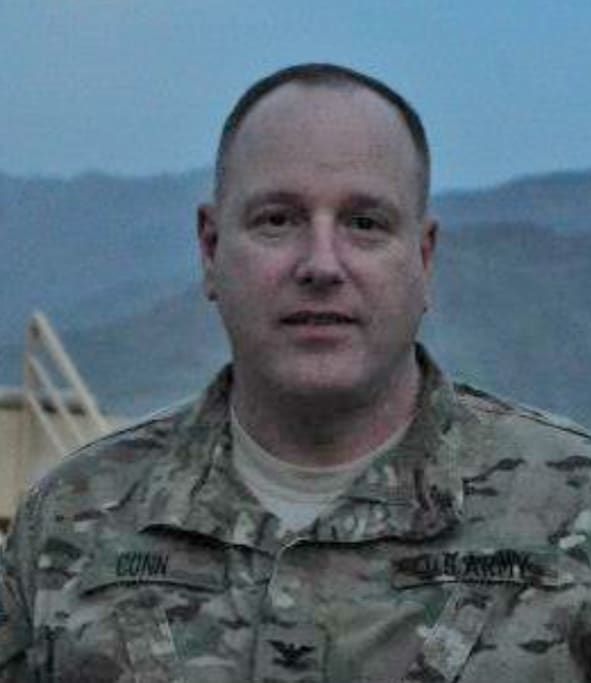 ‘THESE PEOPLE ARE GONNA GET SLAUGHTERED’ – COLONEL ABE CONN

His son was just four days old in 2002, when then-Major Abe Conn boarded a military plane and landed half a world away in Afghanistan, his home for the next year.

“At the end of my first deployment, I’d lived in Kabul longer than I’d lived in the Florida Keys,” he said. “We had just moved here when I got deployed after 9/11.

“We were one of the first units in Kabul. It was just us and Special Forces guys,” he said. “In fact, I hoisted the American flag on Sept. 11, 2002 at the U.S. Embassy in Kabul. “When I landed in Afghanistan, the wind was blowing 40 mph,” he said. “I awoke the first morning covered in two to three inches of dirt.

“It was an interesting time and place, but it was also the safest time over there because we had just liberated them from the Taliban and the 10th Mountain guys were in the mountains of Tora Bora looking for bin Laden.”

“We lost because although we fought this war for 20 years, we were fighting the same war every year,” Conn told the Keys Weekly on Monday as the world watched the Taliban reclaim the country that American troops had defeated and kept at bay for 20 years.

With each deployment, years apart, Conn said, he’d ask the generals in command, “How many Taliban are up in those mountains? How many bad guys are we after?”

But when he returned three years later and then five years after that, his question was the same. Unfortunately, so was the answer: “About 5,000.”

“You’d scratch your head and ask yourself, ‘What are we doing here?’” Conn said. “It’s just dumb. We have politicians calling the shots instead of the people who know what’s really going on. Our grandfathers walked across Nazi Germany and through the Pacific Islands during World War II fighting strong armies of the world. And in five years, we won. We’ve got 5,000 bad guys and we’re there for 20 years. And 90% of the Taliban aren’t even from Afghanistan.”

Like so many of his fellow service members who spent time in Afghanistan, Conn’s heart has broken in recent weeks, for the nation, its women and for his Afghan friends, U.S. allies, who were left behind.

“These people are gonna get slaughtered,” he said. “My interpreters are gonna die. They’ve been turned down twice now for visas.

“How we left is just a disaster. Middle of the night, we just picked up and left. We were there for 20 years. We could’ve stayed one more year and gotten everyone out. But we left them. What we’ll also see next is a huge spike in veteran suicides. We’re already losing 22 vets a day to suicide. It’ll get worse.

“The Afghans are some of the nicest, most honest and trusting people I’ve ever met,” he said.

“And the Taliban haven’t changed. The word has been put out to them not to kill, so they’ll wait until we’re gone. In six, eight, 10 months, it’ll be back to business as usual for them,” Conn said. “It’s just so disheartening.”