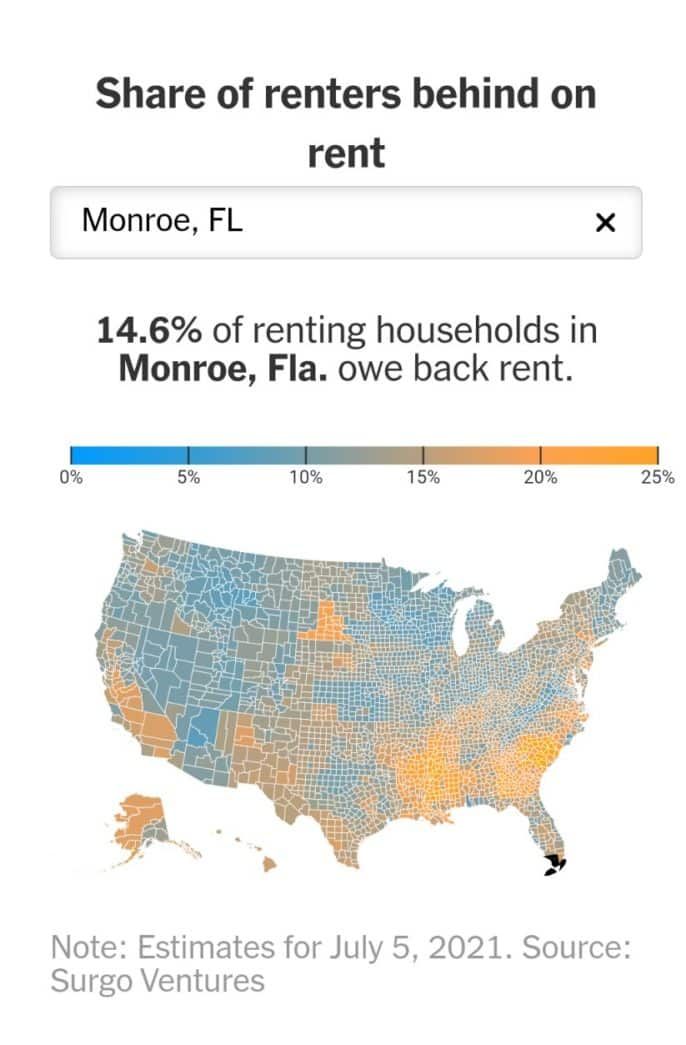 On, off, on again. That’s how the federal moratorium on evictions related to COVID-19 is rolling. On July 31, the moratorium ended. Just three days earlier, the Supreme Court published a decision that indicated Congress would have to pass legislation to extend it, which it did not. But that didn’t stop the Centers for Disease Control and Prevention from issuing an order on Aug. 3 that put the moratorium back in place due to concerns about increasing case counts.

“Evictions of tenants for failure to make rent or housing payments could be detrimental to public health control measures to slow the spread of … COVID-19,” said CDC director Dr. Rochelle Walensky.  “This order will expire on Oct. 3, 2021 and applies in United States counties experiencing substantial and high levels of community transmission levels …”

And while neither Florida nor Monroe County was singled out, we’re clearly in the “red” on the CDC’s COVID-19 map, indicating there is a high level of transmission in every Florida county, except Glades County, which is rated as “substantial.”

On Aug. 3, Florida Gov. Ron DeSantis said the moratorium, “was imposed by the CDC — and I don’t think that they had the authority to do that. The U.S. Supreme Court indicated as much.”

While the legality of the moratorium is up in the air, many are still looking at local court dockets to see if there will be an avalanche of eviction notices in the Keys. What happens next will be a marker of the Keys’ economic health.

While the moratorium has protected tenants who may have faced unemployment or illness during the pandemic, it left many landlords, both locally and nationwide, wondering who was going to protect them when their monthly mortgage payment was still due.

“I would’ve lost my house due to that moratorium if not for the grace of the bank ,” said Key West homeowner Joe Weatherby, who was only able to afford the New Town duplex he bought with his brother because of the included rental income. “I certainly understand people struggling, and I don’t want to evict anyone, but my tenants looked me in the eye, laughed and said, ‘The governor says we don’t have to pay rent.’ And they didn’t. They were supposed to be out in October, but they ended up staying — rent free — until February. They stuck me for five months’ rent. Meanwhile, they were collecting unemployment while still working for cash and could clearly still afford to party every night.

“ They became squatters,” Weatherby said, thanking Key West attorney Greg Oropeza for helping with the eviction process and legal requirements. “The moratorium, while designed to help those in need, turned into an opportunity for lowlifes to get rich on the backs of others.”

The federal moratorium on eviction only covered tenants who were adversely affected by COVID-19 — those who were sick and/or lost their jobs. And, in order to be protected from eviction, the tenants had to swear they had attempted to obtain rental assistance from the government, meet income requirements, etc.

But expanding the Monroe County eviction search for the same time period to include non-monetary evictions, February 2020 to July 2021, the case count exploded to 198. Using the same search parameters, there were only 31 during the 17 months previous.

What’s happening? Failure to pay rent due to hardships isn’t the only reason a tenant can be evicted. For example, evictions could be due to breaking a clause of the lease, like having a prohibited dog. Or having four tenants, instead of the allowed two.

The Florida Keys aren’t alone in the struggle.

“Industry analysts cited in the landlords’ suit estimate that 10 million delinquent tenants owed $57 billion in back rent by the end of 2020, and that $17 billion more had gone unpaid since then,” states the article by Glenn Thrush. “The lawsuit, filed in the U.S. Court of Federal Claims, in D.C., is meant in part to press the Biden administration to speed up disbursement of $47 billion in emergency rental relief that was included in the two coronavirus relief packages. Landlords also hope to prod the White House to loosen the application requirements for the relief, which many owners say are too onerous.

“The case is also intended to challenge the federal government’s right to impose such restrictions in the future, arguing that the CDC’s actions violated private property rights protected by the Takings Clause of the Fifth Amendment, which requires the government to compensate private parties when it seizes their assets.

At risk of eviction

The essay includes a digital tool that calculates the percentage of renters in each county who are behind on rent and the average amount owed. In Monroe County, 14.6% of renting households owe back rent — the average amount of rent owed is $5,116, which would equate roughly to about three months’ rent in the Florida Keys.

“State and local governments can prevent this rental crisis from becoming a homelessness crisis with help from nearly $50 billion in federal Emergency Rental Assistance funds,” the article states. “Yet despite laudable coordination efforts and recent acceleration, the rollout is too slow, too few renters are eligible and the application process is too complicated. As a result, funds are reaching only a small fraction of those who need them most. …

“There is also a huge eligibility gap: We estimate that of the 6.2 million households in arrears, half make more money than the federal program allows and therefore aren’t eligible. The result is that at-risk households in nearly every county are still catastrophically behind.”

The federal government issued $1.4 billion to Florida in emergency rental assistance funds, with approximately $529 million distributed directly by local governments with populations over 200,000. The remaining funds, over $800 million, will be disbursed by the state.

According to a report from Tampa, the state has distributed only 2% — or $18.3 million — of the federal funds it received to help keep renters in their homes.

That program — called Our Florida — is administered by the state.

“We receive multiple calls each day from residents about the ‘Our Florida’ program and the lack of assistance/acknowledgement they are getting or receiving from the system,” said Sheryl Graham, Monroe County director of social services. “Unfortunately, we have no control over that system, nor do we have any additional rental funding, other than what’s listed below.”

In Monroe County, the Social Services department has spent more than $1.7 million it received from the Coronavirus Relief Funding (CARES Act) through December 2020. The money helped 188 households with 441 people who were directly affected by COVID-19, according to data from the county.

Specifically, said Mark Lenkner of the Monroe County Continuum of Care, “For the fiscal year that began July 1, 2021, we were awarded: $1,025,000 for homelessness prevention and $797,000 for rehousing, which helps cover first, last and security.”

The Monroe County Continuum of Care (CoC) is the lead agency for the coordination and planning of homeless services in the Florida Keys,” its website states. “As the lead agency, designated by the U.S. Department of Housing and Urban Development (HUD) and the Florida Department of Children and Families, the Monroe County CoC organizes the collaboration of local agencies to address the needs of clients and provide essential supportive services.”

He added that the group’s website monroehomelesscoc.org provides links for Our Florida and other available funding sources.

“If we receive any additional rental funding, Monroe County Social Services would be willing to assist with distribution of the funds countywide,” Graham said. “We have a proven track record of success in distributing large amounts of rental assistance, with total compliance, to a large number of residents countywide.”

In Key West, United Way of Collier and Monroe counties provided $230,000 in rental assistance in the summer of 2020 and between January and March 2021, said Florida Keys area president Leah Stockton.