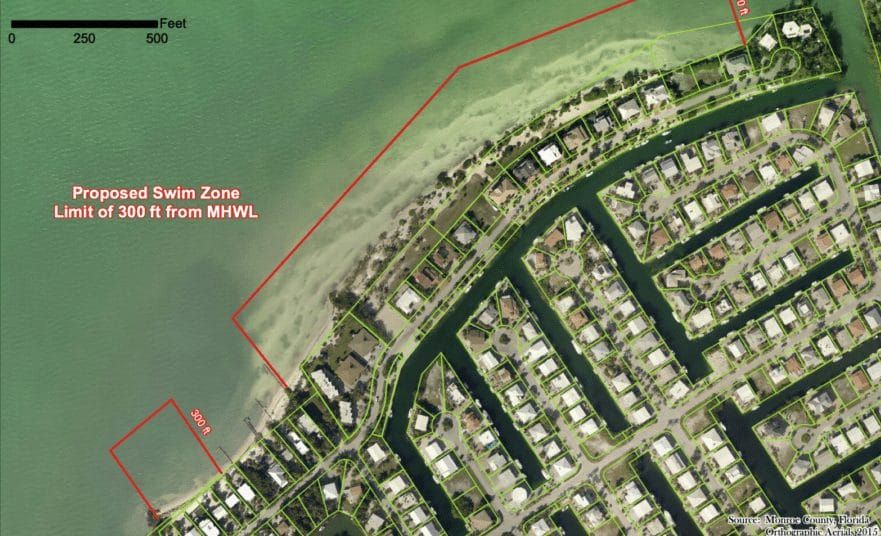 Boats heading to the popular bayside beach in Islamorada will soon need to anchor farther from the shore. Those that don’t could face fines.

Enacting a boating-restricted, swim-only area off the beach looks to address ongoing safety issues as well as problems from the commotion that’s seen out on Port Antigua and White Marlin Beach where homes and private property sit in close proximity.

The approved ordinance isn’t regulating any of the upland beach area along any portions of the swim area. More, it regulates the navigable waters.

Frezza added that the manufacturer of buoys was slowed due to COVID. But all materials needed for the project, from buoys and stickers to anchors and chain, are delivered and ready for installation.

Boat U.S. franchisee Islamorada Poseidon Marine was hired as the contractors to install the buoy system. Frezza said the buoys are expected to be in place before an upcoming holiday that usually sees hundreds of boats anchored up along the beach.

“Hopefully we can get this done in the next two weeks,” he said. “It’s still the goal and I think it’s still realistic we have them in before Memorial Weekend since we have no more hold-ups.”

Stickers on the white buoys will read “vessels excluded, swim zone.” The village ordinance and permit number will also be attached, Frezza said.

With installation, marine patrols from the Monroe County Sheriff’s Office and Florida Fish & Wildlife will be able to issue boater citations for those who violate the ordinance. Fines could be as high as $250 for operating vessels within the swim zone off Port Antigua and White Marlin Beach.

“I think it’s going to be a huge improvement,” he said. “We had to do something before someone gets hurt or killed.”

Discussions date back to a 2014 town hall, held to gather input from residents on the issue. Fast forward to the village council’s Feb. 13, 2020 meeting when complaints were heard and a video played of the trespassing and tense moments between boaters and property owners.

Council subsequently gave village staff direction to engage in discussions with the Port Antigua and White Marlin Beach communities over a proposed swim area as boating traffic and activity continued to escalate out on the water. That led to the proposed ordinance coming back to council, which gave unanimous support last summer.