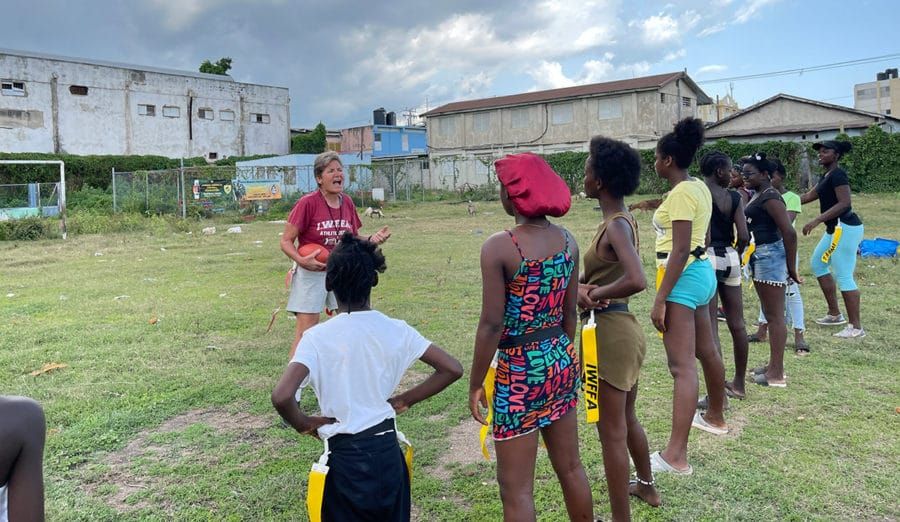 SPORTS & MORE: WOMEN’S FLAG FOOTBALL HAS BEEN A LONG JOURNEY

When I first met Diane Beruldsen, she was teaching at Sugarloaf School and playing as DBQB in a three-team women’s flag football league at Bernstein Field on Stock Island. That was in the early 1990s.

Now she’s traveling all over the world, building the International Women’s Flag Football Association as its founder and president.

“I think two dozen or more,” she said, counting off the countries she’s visited, “26 probably,” selling the values of flag football. “It’s my journey. It’s why I was born,” said Beruldsen. After the games end, the players shake hands and there are lots of smiles.

“That’s the way all sports should be,” she said.

We were having lunch once again as I learned the advances of flag football since last we met. I have admired her tenacity in driving her sport, so much so that we have met almost every year. This year, she offered a new restaurant, Kennedy’s on Kennedy Drive. I hadn’t been there for many years. Expansive menu. Great food. Super service. I highly recommend it. Past restaurants in our string of meetings have included Bobalu’s on Big Coppitt and Goldman’s in the Winn-Dixie Plaza. I would recommend those, too.

As we talked, she said she was already packed, getting ready for a trip to Jamaica. “Next year, I’m going to Pakistan and Sierra Leone,” she said.

Beruldsen is playing catchup after the virus kept her from traveling last year. All of this leads up to the Kelly McGillis tournament Jan. 24-31, 2022, in Key West. “It’ll be the official 30th tournament,” said Diane. “We had a 30th this year, but it was just for local teams. The teams around the world couldn’t travel. So we’ll have the official 30th next year.” The founder says the largest tournament was in 2001 when 48 teams participated. Now, the tournament includes social events as well as clinics for playing, coaching and officiating and the women’s speakers program, which is how she met Jaimie Saffa.

Saffa had contacted Beruldsen about coming to Key West and played on the Loose Women’s team, which is a team of players unaffiliated with any group of players. During the speakers program she told her story.

She had lived in Sierra Leone during the time of a civil war from 1991 to 2002. Saffa talked about being raped, her father being killed and her brother having both hands cut off. She, her mother and brother escaped to Canada.

But next March, she will meet Beruldsen back in Sierra Leone to spread the gospel of flag football. “We’re already scheduled for four cities, teaching flag football to the girls in the schools. It’ll be our biggest promotional tour.”

Raising funds to support her travels has always been a problem. She has cleaned homes. She delivered mail. She has been a substitute teacher. She has worked as a server at several island restaurants. She has tried a variety of jobs that will allow her to continue her extensive traveling, introducing the game and working as its ambassador.

Two years ago, Diane went through chemotherapy and radiation to recover from colon cancer. She’s had cataract surgery in both eyes. It cost a sum, which she got from her partner, Wenke Breistein. “Any time I can’t find something,” she says, “I want my money back for the eye surgery,” she laughs. Beruldsen and Breistein, who is from Norway, have been together for 20 years.

Diane says they won’t get married because “the government kept us from being married for so many years.”

She is also super active with the Stock Island Association.

At 62, and still pounding her Brooklyn accent, she only plays when necessary, meaning when the “Loose Women” lack players.

Her role, besides being the queenpin of women’s flag football, is officiating games. She plans to retire from all of this in five years.

But, she’ll always be the founder.

With a loss, but well-played, in its opening game, Key West High’s football team heads to Port St. Lucie Friday, Sept. 3, for a 7 p.m. game against Centennial. After a week off, the Conchs play their first home game at 7 p.m., Sept. 17, against St. Brendan at the Backyard behind the high school. Centennial lost its opener, 17-13, at Sebring.

Key West lost, 16-13, at Palmetto Ridge on Friday, Aug. 27, giving up a pair of touchdowns and two-point conversions in the first quarter before almost pulling out the victory by manhandling the home team in the second half.

Palmetto Ridge scored on an 80-yard pass on the third play of the game and scored a second TD on its second drive, both times adding a 2-point conversion.

When Key West scored, still in the first half, coach John Hughes obviously felt that the Conchs had to go for the two-point conversion as well. It failed.

Early in the fourth quarter, a 13-yard pass from Preston Herce to Mike Cates plus a kicking extra point, brought the Conchs to within 16-13, the final score.