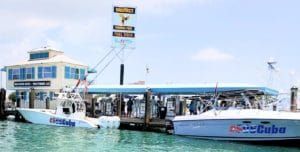 Bearing #SOSCUBA signs and flying Cuban and American flags, a flotilla of seven boats from Miami stopped for fuel in Key West Friday afternoon, then departed for international waters offshore of Havana, Cuba.

The effort was said to be planned to “safely show support for the Cuban people.”

Although the U.S. Coast Guard did not sanction the event, officers were closely monitoring it with boats and aircraft.

Participating boats were planning to muster 12 nautical miles (approx. 15 miles) off Havana, Cuba, and remain in international waters to show support for the Cuban people in their recent demand for freedom from the oppressive communist regime that has ruled the island nation since Fidel Castro seized power in 1959.

JIm Gilleran, secretary of state of the Conch Republic, and a volunteer vessel safety inspector with the Power Squadron, conducted safety inspections of the departing boats, which initially had planned to launch Chinese lanterns and fireworks offshore at sunset so the CUban people could see the support from their American neighbors. But fireworks were not permitted aboard the vessels, and Coast Guard spokesman Petty Officer Jose Hernandez, reminded participants that flares are for emergency use only, and discharging them would likely attract the attention of Coast Guard or other law enforcement on the water.

“These boats are within their legal rights to be in international waters, at least 12 nautical miles from Cuba,” Hernandez told the Keys Weekly while awaiting the flotilla’s arrival Friday in Key West. “We’re neither escorting nor shadowing the flotilla. We’re simply aware of the event and are maintaining our current and continuing presence in the Florida Straits between here and Cuba.”