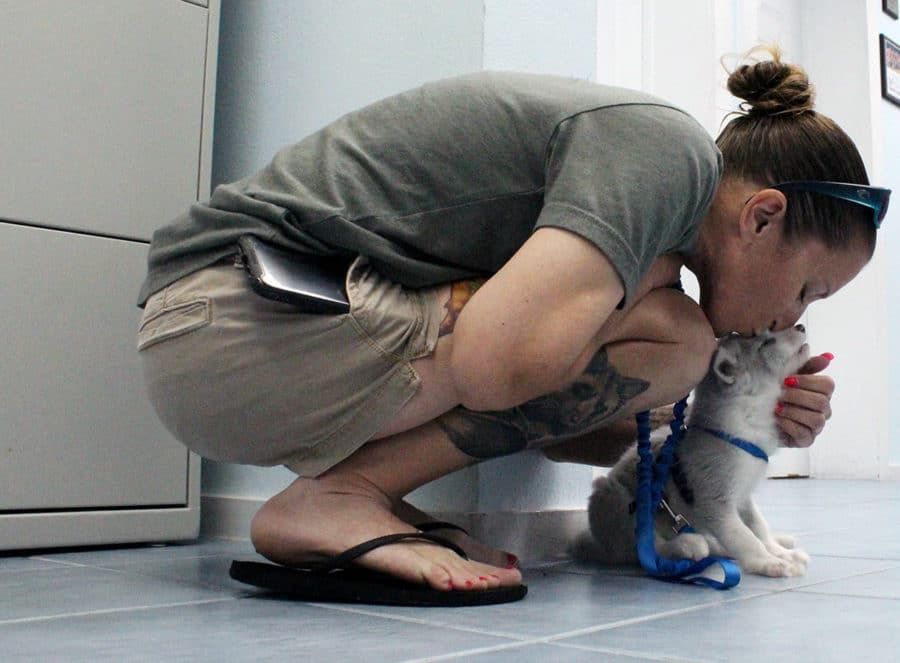 Saved from a fur farm and finding a new island home: a 6-week old fox with blemishes is safe in the Keys.

In early May, Key Largo resident and founder of Pawsitive Beginnings Inc., Nicole Navarro, received word that several baby foxes were rescued from a Minnesota fur farm. Navarro couldn’t say “no” to taking one of them, having given four older foxes sanctuary at her home last year.

She flew with a friend to Save A Fox sanctuary in Minnesota, which safeguards foxes with injuries and fur flaws. The nonprofit saves the furry animals, which are deemed “no good” by fur farmers and left to be killed.

On May 6, Navarro retrieved the tiny fox she calls “Reef.”

“I was driving one day before I got him and it popped into my head,” said Navarro, who started her nonprofit last year to raise awareness about fur farming. “I thought it was very fitting.”

From Minnesota, Navarro and her friend drove roughly 26 hours to the Keys with a fox that, at times, was playful, and other times, sleepy. On May 8, they were back in Key Largo.

“It’s definitely been an experience,” Navarro said. “The four adult foxes I have are independent. Taking care of a baby fox is a full-time job making sure he’s comfortable.”

Reef was born on a fur farm around late March. He was able to be rescued after his mother and siblings started to reject him. Navarro said Reef is missing toes on his front right paw. The tip of his tail is missing due to injuries sustained in his short time on the fur farm.

Navarro said farm-bred foxes are pretty much “born to die.” Those deemed undesirable, meaning their fur is not worth much, are killed to make room for new fox pups being born. A few rescues, like Save a Fox Rescue in Minnesota, have agreements with fur farmers to go in quickly and save those that otherwise would be destroyed.

In 2018, Navarro was introduced to foxes while volunteering at the Monroe County Sheriff’s Animal Farm. Realizing the need for facilities to house saved foxes, she started her nonprofit last year and welcomed Louie and Libby to her Key Largo residence last July. The two are doing well inside a spacious caged area on her property. Louie’s fur wasn’t good enough for a coat, while Libby had a missing tail — a byproduct of breeding blemishes in an attempt to obtain top-tier fur.

Roughly 400 fur farms are in operation today in the U.S., according to Four Paws U.S. Of those, 56 breed foxes.

Not long after that, Navarro retrieved Penny and Jasper from Save a Fox Rescue. Jasper has a flat foot, which stems from poor breeding and trauma from confinement in a small wire cage. Penny was deemed “no good” by fur farmers, but Navarro said she is in good health.

As for the newest addition, Reef recently saw veterinarian Michael Claudio of Mobile Pet Doctors for a checkup. The fox subsequently received his first set of vaccines.

Navarro said she’s hoping eventually to take him to meet children and educate the community on foxes and the dangers they face. She also wants people to know that foxes are not domesticated animals.

“These guys aren’t born to be pets,” she said. “People say they want a fox as a pet. In reality, they do fox things.”