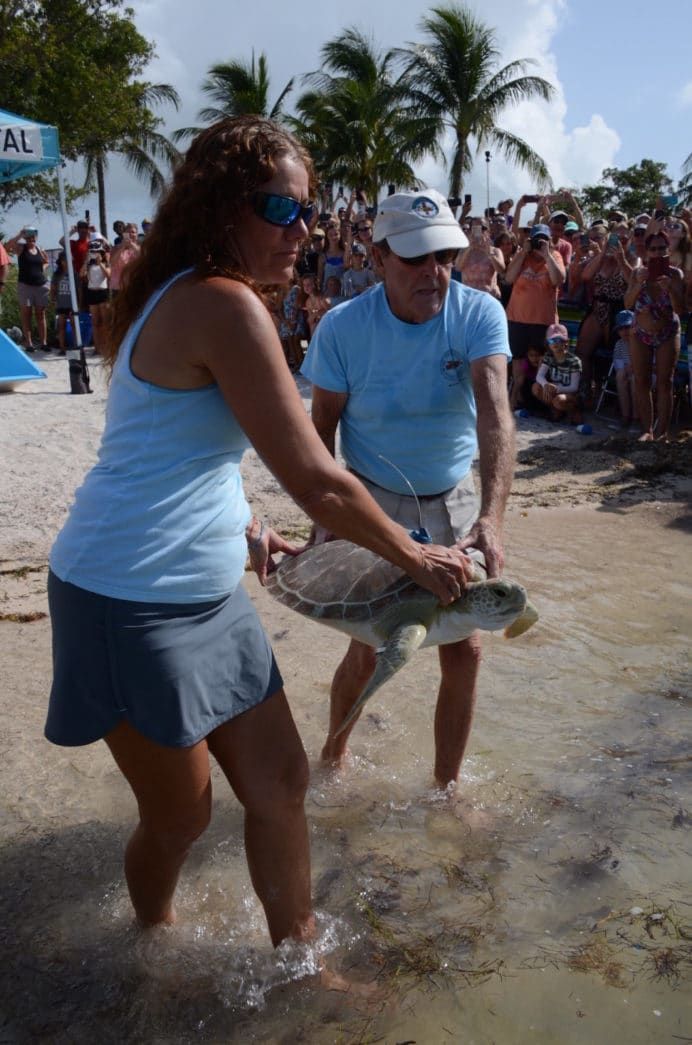 It’s been less than two weeks, but Lucky Pulse — from the Turtle Hospital in Marathon — hasn’t left the Keys. Lucky Pulse is part of the annual Tour de Turtles program sponsored by the Sea Turtle Conservancy where the animals are fitted with tiny transmitter satellite tags and released into the wild. The turtles are “racing” to see who can go the farthest while raising awareness about the challenges facing their survival.

As of Aug. 3, Lucky Pulse was located about 10 miles offshore, gulfside, of the Middle Keys, although she’s covered about 42 miles since her release from Sombrero Beach on July 23.

Keys Weekly readers and turtle devotees can follow Lucky Pulse’s journey by logging onto www.tourdeturtles.org. Lucky Pulse was one of 11 chelonians (or hard carapace sea turtles) competing in her field. In the other division for leatherback turtles, there are 10 “competitors.”

Lucky Pulse was rescued west of Horseshoe Key earlier this year where she was found entangled in trapline with a heavy load of fibropapilloma tumors. Her caregivers at The Turtle Hospital say her recovery has been nothing short of a miracle.

“Lucky Pulse had a 4-pound fibropapilloma tumor surgically removed, in addition to other growths, and was on life support for four days,” said Zirkelbach. Her treatment at the Turtle Hospital included a whole blood transfusion, bronchoscopes, breathing treatments, surgeries, broad spectrum antibiotics, fluids, vitamins and a healthy diet of greens and mixed seafood.  Lucky Pulse weighs approximately 35 pounds and is so named because she has a pulse-like marking on the top of her head.

Started in 2008, the Tour de Turtles has often included animals from The Turtle Hospital. The event follows the marathon migration of sea turtles from their nesting beaches to their foraging grounds. The turtles are tracked for about three months. Sea turtles are highly migratory, often traveling hundreds or even thousands of miles between the beaches where they lay their eggs and the foraging (feeding) grounds where they spend much of their time at sea.

The post READERS CAN FOLLOW THE JOURNEY OF A REHABILITATED TURTLE FROM MARATHON IN TOUR DE TURTLES appeared first on Florida Keys Weekly Newspapers.