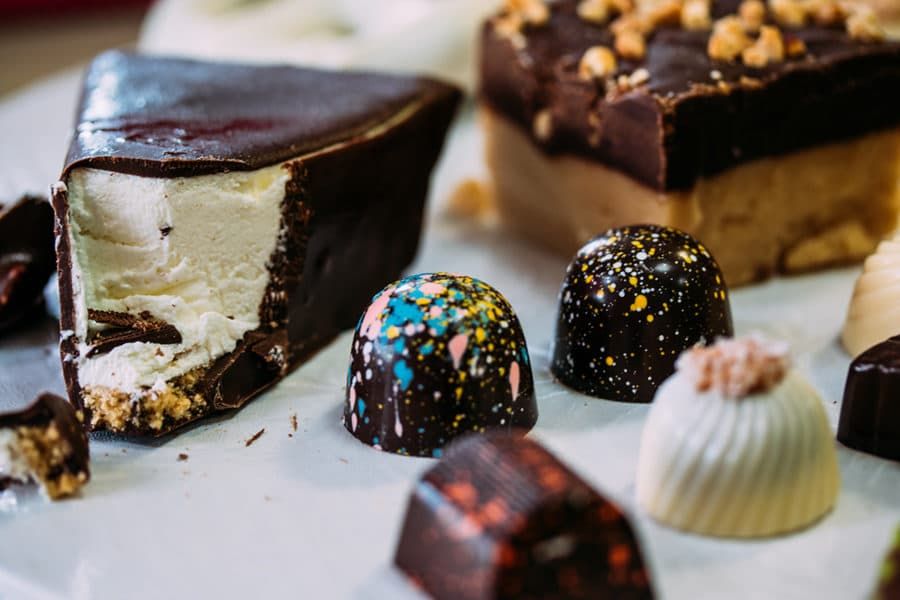 A renowned chocolate and ice cream shop in the Upper Keys has new chocolatiers leading the factory.

With shops at MM 100.5 in Key Largo and MM 81.9 in Islamorada, many locals have seen Bob Thomas stocking shelves inside local stores or on U.S. 1 driving the chocolate truck. Meanwhile, his wife, Kris, would be whipping up chocolates and running the stores.

The two are enjoying some traveling and their beautiful home in Key Largo, with their retirements now official after 11 years. Entering the chocolate factory is a couple who, like Bob and Kris Thomas, have chocolate and the community at the center of their hearts.

Rich and Bronna Peterson have run Voice Chocolate in Lake Park, near North Palm Beach, for a number of years. They set out to grow the candy company by creating new products, but they also placed emphasis on shaping lives.

Roughly six months ago, the two were seeking a business purchase. An opportunity to run another sweet shop came their way. Rich said they decided to add the Keys chocolate shops to the repertoire to build and grow both places with a mix of products.

Not only that, what drew them to the opportunity was the involvement Bob and Kris Thomas had in the Keys community.

“Their vision was kind of similar to what we were doing up there,” Bronna said. “It was a kind of a match. It felt right when we were down here.”

Kris Thomas couldn’t help but look back on an exciting 10-plus years crafting chocolates and relationships in the community.

“We built what we felt was a really super company, and we were able to be philanthropic in community, and enjoyed so many different things,” she said “It was a true work of love.”

Along with running a chocolate shop, the Petersons also spent some 20 years running after-school programs and camps. They also have helped kids through tough times via the Little Smiles of Florida program.

Once the workday at Voice Chocolate would end, the Petersons would head right to the after-school program. They’d also take kids on a school bus to places during summer camp. Bronna said the camp came to an end with the coronavirus pandemic emerging.

“Most campers we’ve known since they were 5,” Bronna said.

Through Little Smiles, the Petersons would also send gifts to children who’ve gone through rough times.

“Whether in or out of prison, homeless, parents died, drugs have been affecting the community in so many ways,” Rich said. “People don’t know where to go or who to reach out to and they fall through cracks.”

The Petersons said the Thomases have been instrumental since they took over the chocolate and ice cream shop. Rich said the biggest difference between the stores in the Keys and the one in Palm Beach is the foot traffic.

“This is a chocolate and ice cream store that sees a lot of tourist traffic. Our store up north has less foot traffic, more gift boxes, baskets, specialites, seasonal,” he said. “We’re kind of closed up there because we don’t get a lot of business in the summertime.”

Kris Thomas said she’s pleased that Bob and her were able to find a couple who have the energy, ambition and knowledge to carry the business forward.

“They’re going to carry on the same attitude as we had as far as the community,” Thomas said.

With retirement in full swing, the Thomases are preparing for a trip to Wisconsin to see family. They look forward to not only traveling, but also returning to their involvements within the community.

“I hope to get involved in some of the things that are a little more passionate to me,” Kris said.

As for the Petersons’ outlook on the Keys, Bronna said she can’t help but admire the many hardworking and genuine people in the community.

Patrons entering the sweet shops can enjoy a range of ice cream flavors such as the fudge brownie, butter pecan or blue raspberry and pistachio. Don’t forget to try the famous Key Lime pie on a stick.