BOYNTON BEACH, Fla. /Florida Newswire/ — Author Brian J. Sheen’s new book, “Relentless, Rescuing My Daughter from Scientology, an Illustrated Story,” (ASIN B091P673ZX) is the struggle of a father and newly pronounced grandfather, attempting to get state and federal officials to preserve the sanctity of his family from the Church of Scientology’s “horrific acts” that ripped his family apart and allegedly violated his human rights, was recently released, Quan Publications announced. The book is now available on Amazon in paperback and on Kindle 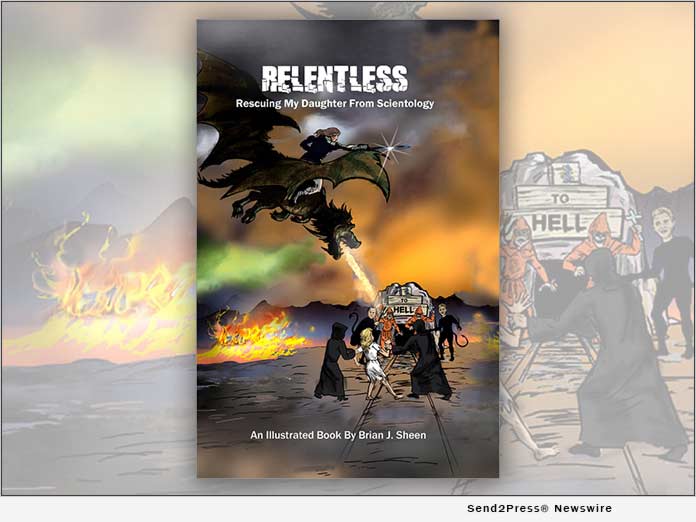 Brian Sheen has always been a devoted father who has cherished his children and shared his love and success with them. He encouraged them to follow their hearts and live a life of freedom. Nothing had prepared him, for the devastating shock, when he received a phone call from his Scientologist daughter, that the Church of Scientology demanded his daughter to never speak or see him again, unless he agreed to pay them hundreds of thousands of dollars and place himself under their full control.

Why? Because her non-Scientologist father had been declared an enemy of her Church, for reasons they refused to disclose to him. If his daughter were to violate their disconnection order, she would also be labeled an enemy, and forced to disconnect from her Scientologist husband, mother, and friends and lose what was most probably, her last opportunity to become a mother. Extremely upset and protesting furiously, she was forced to obey.

This book acts as a warning to any existing or prospective new Scientologist, to recognize what Judge John Breckenridge shared about the Church of Scientology: “In addition to violating and abusing its own members civil rights, the organization has harassed and abused those persons not in the church whom it perceives as enemies. The organization is clearly schizophrenic and paranoid, and this bizarre combination seems to be a reflection of its founder L. Ron Hubbard. The evidence portrays a man who’s been virtually a pathological liar when it comes to his history, background and achievements.” (*See Note 1.)

Money, power, and control of their members life is at the core of how Scientology functions, which Sheen shares with compelling illustrations. He shows how Scientology convinces members to spend thousands of hours to implant Hubbard’s insane alien attachment hallucinations into their minds to disassociate them from reality while expecting they will become superhuman.

“Relentless,” acts as a warning to any existing or prospective new Scientologist, to recognize the trap of how Scientology imprints them with their demented beliefs and why Hubbard’s processes create severe mental dysfunction and dangerous disassociated states. Readers will learn how Scientology’s distorted view of human existence causes them to blame the alleged multiple rape victims of celebrity Scientologist Danny Masterson to accuse the victims, not Masterson, of committing a crime, because they reported their alleged rapes to the police!

They say a picture is worth a thousand words and seeing the visuals of how celebrity Scientologists like Tom Cruise, John Travolta, Elisabeth Moss and Greta Van Susteren have been hypnotized to support Scientology’s family disconnections, attacks on critics, and Hubbard’s fraudulent representations, is shocking.

Readers will feel the emotional impact of the author through the gripping illustrations that share his journey through Scientology and his relentless struggle to reconnect with his daughter and meet his new grandson.

A leading authority on Scientology, Mike Rinder, Emmy Winner for Co-Producing “Scientology and The Aftermath” calls this book, “Powerful. Righteous. He will never be silenced and will ultimately prevail.”