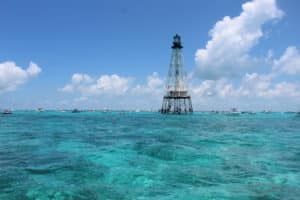 Off the Islamorada shores, boats circled Alligator Reef Light Station during a Labor Day weekend, which saw pristine conditions on the water. Activity at the iconic lighthouse continues this weekend, with some 500 swimmers heading out to the 148-foot structure for the annual Swim to Alligator Light on Saturday, Sept. 11.

Event organizers Rob Dixon and Larry “Lighthouse” Herlth couldn’t be happier with the race’s return after it was canceled last year due to COVID-19. More positive developments came their way earlier in the week, however, with an email coming to Dixon’s inbox notifying him that the federal government would be handing over its ownership of Alligator Lighthouse to his local nonprofit that puts on the eight-mile, roundtrip race.

“Alligator Reef Lighthouse has stood since 1873,” Dixon told the Florida Keys News Bureau while preparing for Saturday’s race to Alligator. “It’s an important part of Islamorada’s local history. It’s our Statue of Liberty (and it) needs to be saved.”

Secretary of the Interior Deb Haaland gave the final stamp of approval that granted ownership of Alligator Lighthouse to Friends of the Pool Inc. on Sept. 7. A recommendation was presented by the National Park Service to Haaland.

“It was almost like I was dreaming,” Herlth said after Dixon sent him the email. “I’m just so blown away and stoked that they would give us the honor to restore this lighthouse. And at the same time, it scares the hell out of me.”

Herlth alludes to the time, work and price tag associated with stabilizing and restoring the lighthouse, which was listed on the National Register of Historic Places in December 2011. Estimates are around $9 million.

“It’s a long road,” Herlth said. “We’re hoping the community steps up. Truly, I think they should. Alligator Light is of huge importance to this community. It’s on the seal of Islamorada. It’s amazing.”

Efforts to secure Alligator Lighthouse go back more than two years, when the U.S. Coast Guard and Department of Homeland Security determined there was no need for them to own and operate it. That announcement also brought an end to lighthouse maintenance, which propelled several groups to apply to the National Parks Service to secure the lighthouse and initiate restoration.

Congress passed the National Historic Lighthouse Preservation Act in 2000 to establish a lighthouse preservation program. The General Services Administration, which preserves government buildings and manages real estate, sought nonprofits or government agencies to acquire Alligator Lighthouse at no cost, so long as they agree to preserve the light’s historic features and make them accessible to the public.

Herlth, an advocate and artist who’s built lighthouse replicas, came before council on Nov. 29, 2018 to discuss a desire to acquire the lighthouse that’s located 4 nautical miles east of Indian Key, just north of Alligator Reef near the Matecumbe Keys. Built in 1873, it’s named after the U.S. Navy schooner Alligator, which was used to protect the Florida straits against pirates and slave ships. The ship went aground in 1822 and was blown up after removing as much as possible, to prevent use by pirates.

Dixon and Herlth visited the Islamorada dais in September 2019 to acknowledge interest in obtaining the historic marvel.

“I think our application isn’t just going to be excellent and right in every way, but I also think it’s going to be a template for anybody that (NPS) ever wants to give a lighthouse to,” Dixon told council members. “We’re trying to set the standard and raise the bar to do everything to the best we can do, and you can see how that turned out with our swim.”

An engineering survey is first in order for Alligator Lighthouse.

“We’ve not been allowed to go on it. It’s kind of up in the air what needs to be done,” he said. “That’s our first and foremost, to actually make sure it’s stabilized.”