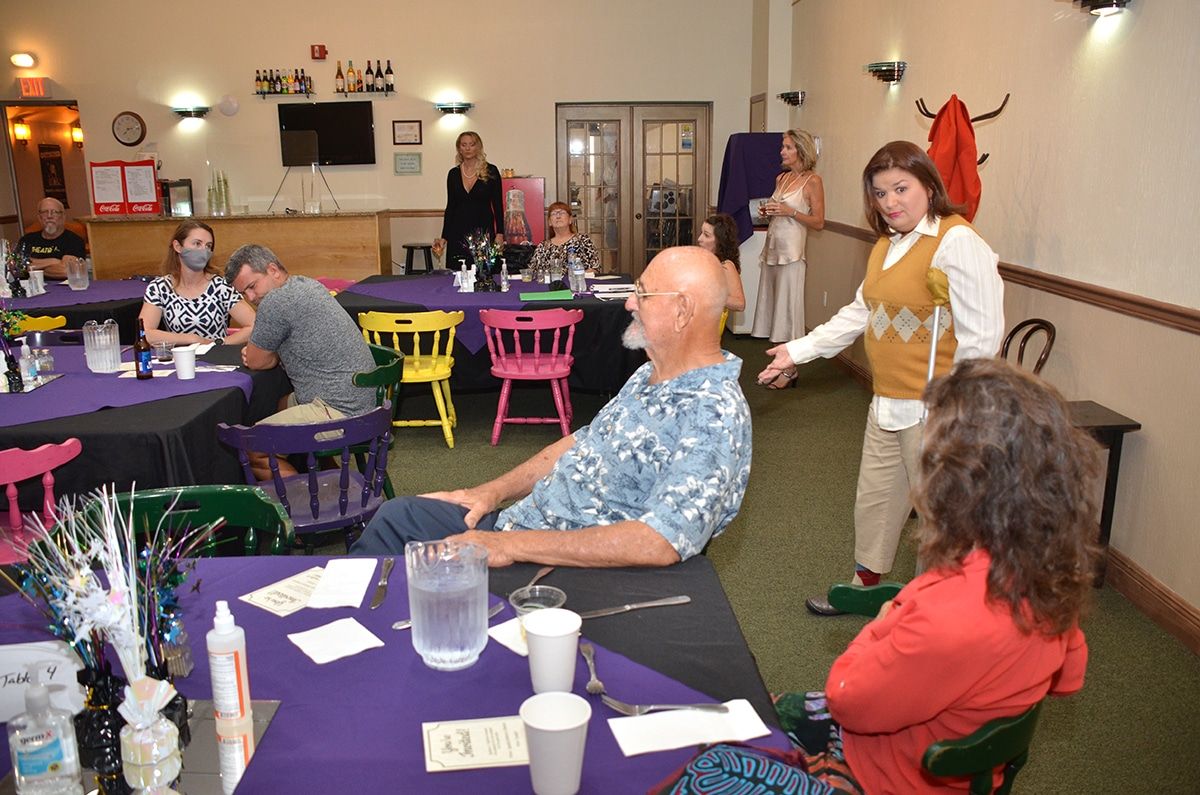 As of presstime, only tickets for the dinner theater matinee are available. But don’t worry, Marathon Community Theatre is bringing back the second round of mystery dinner theater in September.

The evenings of laughter, intrigue and good food are the brainchild of Charla Garrison, an MCT member, actress and author. She owned the Detective Dinner Theatre in Clearwater for 16 years. In 2018, she sold her business, and her husband sold his surf shop, and the couple relocated to the Florida Keys.

Garrison has written more than a dozen murder mystery comedy plans, and sold several to other performing companies.

“We will be presenting ‘Invitation to Murder,’ the first play I ever wrote,” Garrison said.

Garrison said the premise of the play centers on Ignacious Radburn (Jimmy Zimmerman), an eccentric game-show-loving host. He invites six guests to a party at his mansion for a “proposal” they shouldn’t miss.

“Of course, he has a little bit of dirt on all of them and they all need money,” she said.

This is a completely different type of show for MCT. The action happens in the theater galley and guests have a three-course meal catered by Chef Jimmy Pruitt of Marathon Yacht Club. The actors and audience interact — the thespians giving out hints about the crime and the audience asking questions.

“In theater, there is usually an unbreakable fourth wall. In this type of performance, the audience is another cast member,” Garrison said. “I tell the actors, ‘If the audience shouts out a question, reply or go along with it.’ The audience loves to be involved, but we don’t harass anyone who is just there to watch the performance.”

The play, however, has more than one ending which means guests can come on multiple nights and enjoy a “new” murder mystery, albiet with the same cast.

Regular theater-goers will recognize Garrison from her recent performance in “Suite Surrender” as diva Claudia McFadden and from the stage reading of “Some Time Next Year.” Garrison has formed Keys Mystery Theatre and said the nice part is that the dinner theater shows are completely portable — they can be performed at resorts, private homes, etc.

“We don’t need a stage,” she said.
MCT has scheduled four performances of “Invitation to Murder” — three evening shows and one matinee for Saturday, Aug. 21, Sunday, Aug. 22, and Saturday, Aug. 28, with the matinee on Sunday, Aug. 29. As of presstime, only tickets for the matinee are available. Tickets are $50. For more information, call the box office at 305-743-0994 or visit marathontheater.org.