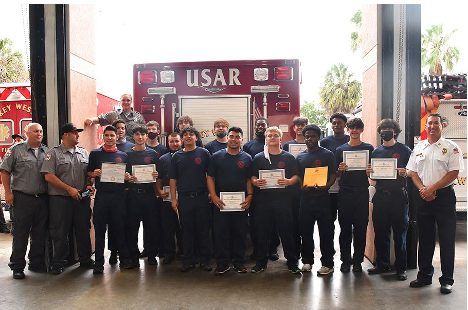 July 21 was a proud day for recruits to Monroe County Fire Rescue. The newly hired firefighters — Morgan Anderson, Alexis Reyes, Nicolas Rangel and Ignacio Vargas — were pinned with badges, took an oath and met with commissioners in a ceremony at the board meeting.

“I just want to say congratulations,” said Mayor Michelle Coldiron. “It has been a goal of ours to have new firefighters and to have new people for rescue teams. I’m just so happy to see all four of you here today, and I expect to see you all for at least 20, 30 years.”

But will these firefighters stay in the Keys for 20, 30 years? That is the question.

Three of the recruits are graduates of Monroe County’s Hot Shots program: Anderson, Reyes and Rangel. Per Monroe County’s website entry about Hot Shots, “The purpose of this program is to decrease the high turnover rate of firefighters (now about 15 percent annually), which is costly and disruptive. Due to the high cost of living, Monroe County Fire Rescue has been hiring more and more firefighters who live on the mainland and commute to their assigned stations throughout the Keys. Non-residents also can enroll in the firefighting courses, but qualified local residents will receive preference in the enrollment process.”

Hot Shots provides free firefighting and first responder training for qualified Monroe County residents in exchange for a commitment to volunteer for three years or work as a firefighter anywhere in the Florida Keys. The program waives the $2,200 fee, which must be returned if the graduate decides to get a job out of the county.

Battalion Chief Charlie Mather is in charge of training for the Hot Shots program, and he says the turnover rate is actually higher than the website’s claim of 15 percent.

“??The website was from a couple years ago,” Mather told Keys Weekly. “It was 30 percent turnover every year. The numbers were really bad. Now we’re starting to see it slow down a little bit, trending in the right direction.”

Mather said the Hot Shots program, which is starting its fourth year of training, is still in its infancy, but he has reason to feel positive.

“We’ve hired a good 30 individuals from the program. All 30 of the individuals we’ve hired for Monroe County Fire are still employed with us. That’s obviously a trend in the right direction.”

Chief Don Bock of Key Largo Fire has also experienced a lot of turnover, losing about 10 to 12 personnel a year who are either volunteers or paid staff.

“We lost paid staff last week to Miami-Dade,” he said. “Some years the turnover is higher, some lower.”

He said the main reason that staff leave is because Key Largo Fire can’t afford to pay better salaries and benefits. Key Largo is at the very top of its millage rate for property taxes that pay for emergency services, and raising the rate would require an act of legislation — a complicated process. Bock hopes that in 2022, the millage rate will be raised so staff can receive better pay.

“It’s not a pleasant situation, but you don’t fault anybody because they have better opportunities,” he said. “Money is the biggest factor.”

“We normally have a lot of turnover this time of year, when the larger departments open up. Cost of living here is very high, so it’s hard for firefighters to live here and raise a family.”

Johnson noted that when Miami-Dade and Broward counties get their budgets for the new fiscal year, usually around September, some of his employees get hired away, especially if they have family up north that they want to be closer to.

“I can’t blame them. The firefighters want to work for their community and raise a family,” he said.

“We’re hoping by getting locals involved, learning the fire service, that we have better retention rates because their families are here,” Johnson said. “I hired one kid out of Marathon High School. He is a local on the department for a year now.”

Perhaps Marathon Fire Rescue is on the right track. Chief Alan Averette of Key West Fire said the department has had great luck hiring graduates from the Key West High School fire rescue training program, which has been running for a few years.

“My deputy chief was in that class,” Averette pointed out.

But he also said there is a natural family feeling, a loyalty, to the Key West Fire department, with fathers and sons, and brothers, joining his staff. Averette’s employees often stay for 30 years and retire. He has one commander who is still working for the department after 34 years.

“We’re blessed to have a pretty good family,” he said. “They’re born here, raised here. That’s why they stay in Key West. I tell my young guys this job isn’t for everybody. But if it’s for you, you’ll enjoy coming to work. It’s the best job in the city.”