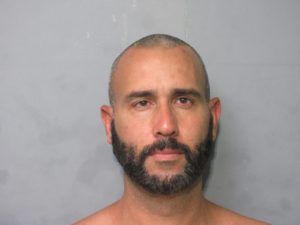 FWC Investigators Billy Thompson and Chris Mattson received a tip of an individual harvesting lobster without a dive flag near MM 95, oceanside. In plain clothes and on an unmarked vessel, investigators noticed the individual, later identified as Yordanky Casares Rosado, 37, snorkeling along the shoreline without a diver-down flag displayed.

Mattson maneuvered the patrol vessel through shallow waters and approached Rosado. Investigators identifyed themselves and activated the blue lights and siren, but Rosado reportedly jumped into his kayak and headed down the canal as he ignored orders to stop.

Rosado reportedly got off his kayak at a homeowner’s residence and ran through several backyards. Thompson jumped off the patrol vessel and pursued Rosado on foot a few houses down. Thompson caught up and handcuffed Rosado, who was found with two undersized wrung lobster tails in the pockets of his shorts.

After a search of the area, investigators located seven more undersized wrung tails. Rosado was arrested and transported to the Monroe County Jail. Charges Rosado faces include nine counts of possession of undersized lobster tails, nine counts of possession of wrung lobster tails, no measuring device, interference with an FWC officer, resisting arrest and fleeing and eluding via vessel, a felony.