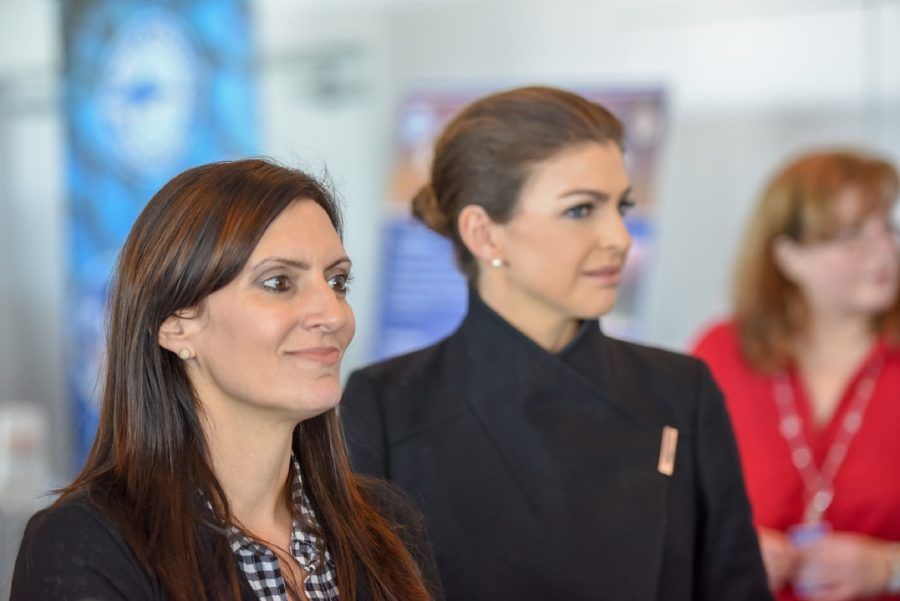 Joining DeSantis in his signature of election legislation, Senate Bill 90, during a press conference in West Palm Beach last week was the state’s No. 2 in charge, Lt. Gov. Jeanette Nuñez. The first Hispanic female lieutenant governor, elected in 2018, Nuñez was tuned in to the issues during the session.

With the signing of the 48-page election bill on May 3, DeSantis said he assured ballot integrity and a fair election in Florida. Specifically, the bill allows drop boxes to be open at a supervisor’s office outside of early voting hours, if monitored in person. Language within the law also states drop boxes be geographically located to provide all voters in a county with an equal opportunity to cast a ballot.

In addition, legislation requires a voter to provide a valid Florida driver’s license number, state identification card or the last four digits of their Social Security number when requesting a mail-in ballot or changing political party.

Nuñez, in an interview with the Weekly, said the bill ensures that ballot harvesting and mass absentee ballot mailings won’t happen under the DeSantis administration. Florida residents who are registered can cast their votes either by voting early, submitting an absentee ballot or going to the polls in person on election day.

“I don’t think anyone with a straight face can say that this bill impedes your ability or restricts your ability to vote,” she said. “You still have all of those mechanisms to vote. You just need to do it the right way, so we wanted to make sure that we were being transparent … that people are not going to prey on our senior population, in particular with regard to ballot harvesting, we’re going to address that.”

“This governor has infringed our rights once again,” she said.

Several lawsuits were filed after the signing, including one from the Florida League of Voters.

“The legislation has a deliberate and disproportionate impact on elderly voters, voters with disabilities, students and communities of color,” said Patricia Brigham, president of the League of Women Voters of Florida.

In response, Nuñez said she’d like those opposed to point out the “actual line in the bill” that oppresses or suppresses certain voters.

“You still have two weeks of early voting, 7 (a.m.) to 7 (p.m.) at least in Miami-Dade County. I know other counties can tweak the times,” she said. “Many counties have two full weeks.”

Just days before signing the election bill, DeSantis announced the suspension and invalidation of local COVID-19 mandates, like mask wearing, through two executive orders. The governor also signed Senate Bill 2006, which authorizes the governor or legislature to invalidate local measures during an emergency that “unnecessarily restrict a constitutional right, fundamental liberty or statutory right.” Legislation, which takes effect July 1, exempts orders in response to a hurricane or weather-related emergencies.

Per the bill, emergency orders are limited to seven days, instead of 10, and renewals of an order are limited to five. It also requires the governor to provide specific reasons if a decision is made to close schools or businesses during a public health emergency.

Nuñez said legislation allows private businesses to choose whether to keep mask mandates for employers and their customer base. Government cannot operate under a cloud of emergency orders any more, she said.

“As we get more and more vaccinated, you can’t have it both ways. You can’t say ‘Get vaccinated, do your part, be a good America, but oh, it doesn’t really work so you have to keep your mask on and keep your distance and still have people shut out of business,’” she said.

While measures within the executive orders and bill don’t apply to schools, Nuñez said the governor would support an evaluation among school districts as they move into the summer and next school year.

“Risks are much less for children and young adults than for seniors. That’s why the governor said we support having options for parents,” she said. “He would support for it to be optional. The school districts can make their decisions.”

As for the state session, Nuñez called it “strange” because people weren’t allowed inside the capitol building due to COVID. Not all issues reached the finish line, but Nuñez said revenue estimates are exceeding projections heading further along into 2021 — a byproduct of an open economy and decisions throughout the last year.

Legislators in the House and Senate passed a $101.5 billion budget before the session concluded April 30.

“From a budget standpoint, at no point during the COVID pandemic did we have to touch our ‘rainy-day’ fund,” she said. “We doubled down on it to ensure our reserves are strong and our financial footing is strong.

“Sustainability is going to be key, as we continue to have areas of the economy that are still impacted, for example the cruise industry,” she continued. “Those are all things that as we continue to get further away form COVID and further towards what we were, which from my opinion we were on a path to prosperity, I think you will see a much different outcome than what it could have been had the 2018 election outcome been different and had the governor had made different decisions along the way.”