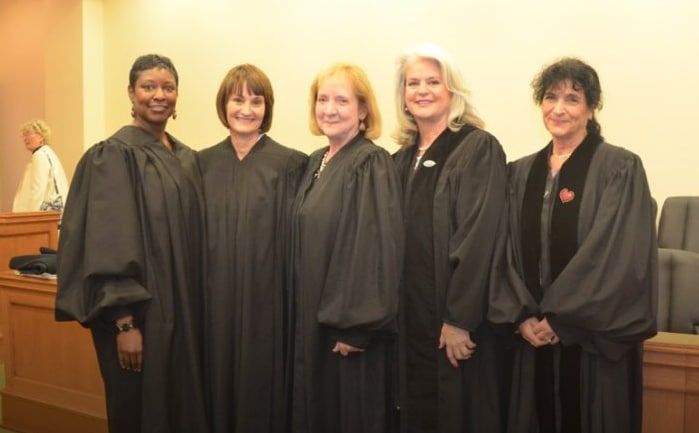 Judge Ruth Becker was elected to the Monroe County Court in 1990, then was re-elected without opposition until she retired on July 30. The Board of County commissioners saw fit to proclaim Aug. 18, 2021 Judge Ruth Becker Day.

“The entire time, Her Honor was one of the best. I had nothing but the greatest of things to say about her,” said her longtime colleague, Marathon criminal defense attorney Bill Heffernan. “When I said goodbye, I’d been a lawyer for 50 years in January. I’ve been doing this for many years, in front of many judges. I can only tell you, Judge Becker was top shelf, a very, very compassionate judge. People in this community owe their freedom and life to her drug court.”

Clearly, Becker made an impact in her legal career and on Monroe County. But things might have been very different if not for a small twist of fate in her youth. She told Keys Weekly that she graduated from Smith College with an honors major in microbiology, and she came this close to going to medical school.

“I was working at Harvard Medical School, doing editorial work for the The Journal of Infectious Diseases, she recalled. “And I had never been a big fan of math. Never took physics. That was an impediment. And it’s why I never went to medical school. I think I thought somehow, when I was young, that law would be an area where I could make a difference.”

And she has made a difference. Key West attorney Richard Fowler, the former chief judge of Monroe County, created the county judge position in Marathon that Becker ran for and won in 1990. But Fowler needed help in the criminal circuit court, as well.

“God bless her, I talked Ruthie into it — circuit work in addition to county work,” Fowler said. “She was gracious enough to take it on. … There’s nothing that I asked her to do that she wasn’t capable of doing. She’s one of those shining examples.”

But she said that if she had to pick the favorite part of her job, it would be drug court.

“Drug court was something that I found to be extremely — I wouldn’t say enjoyable, but it was therapeutic,” she said. “Back in the day, offenders would just go into prison, get out and repeat, over and over. Not everyone makes the changes, but many do. And when they maintain sobriety and become functioning members of the community, to witness that is very rewarding.”

“From a court perspective, I would say drug court is her greatest legacy,” said trial court administrator Holly Elomina. “Her dedication helped many Middle Keys clients with their sobriety in her 30 years on the bench.”

Becker was also known for her creative methods in drug court. Her clients would be assigned counseling and 12-Step meetings, and once a month they would meet her at drug court … then go outside for a run.

“I went to drug court college in Georgetown, Washington D.C., and conferences around the country,” she said. “One of the things I learned was that with chronic substance abuse, the brain loses pleasure-enhancing brain chemicals — but not endorphins. I encouraged them to get their bodies moving, to help them feeling better naturally. We used to go out to the Seven Mile Bridge after drug court.”

“When she sentences someone in drug cases, she mandated that they exercise one hour a week,” he said. “The fact that she was out there with the drug people, practicing what she preached, was a big deal to me as a defender. She cared about people to the point where she would get down in the mud with them and work on their recovery.”

In fact, she was an eight-time marathon runner, and she attributes her stamina and confidence to her passion for exercise.

“It gives a person the reassurance that you can do what you set your goals for,” she said.

The governor now has the job of appointing her replacement, who will have big shoes to fill. Becker says she noticed an increase in heroin and fentanyl in her drug cases, and her appointee will have to take that on as well.

“Really atrocious things,” she said. “It may have been an offshoot of the opioid crisis.”

But for now, she’s casting her mind to other matters. She is enjoying her home, newly built after being destroyed by Irma, with her husband, who is also retired.

“I’m learning how to sleep past six o’clock now. It’s been a month. Sometimes I have to stop and figure out what day of the week it is. I’m doing some pleasure reading. And I’m a good cook.”

But Becker, whose hero is Ruth Bader Ginsberg, may not be able to stay away from the courts for long.

“I haven’t decided whether I want to go back to work as a senior judge,” she confessed. “You have to wait a year before you can do that.”