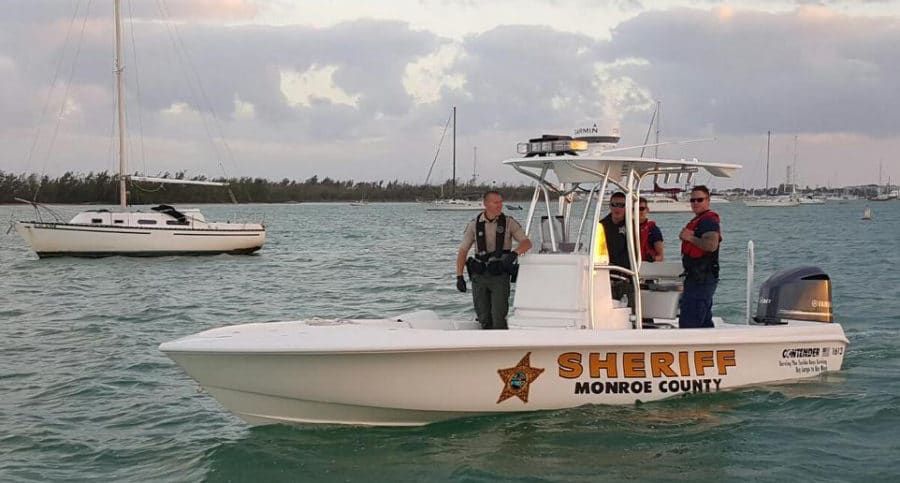 LOBSTER MINI-SEASON: EVERYTHING YOU NEED TO KNOW

One of the most challenging parts of lobster mini-season is understanding its boundaries — both geographically and time-wise. There’s a difference between lobster hunting in Layton (never!) and in Key Colony Beach. As a general rule, don’t hunt for lobsters in canals … unless you are doing so in front of personal property, but only as far as the centerline of the canal. Also, don’t hunt for lobsters along shoreline, unless you are more than 100 feet away in open water. Keep reading:

THE DARK SIDE OF LOBSTER SEASON

During sport season, divers cannot get in the water at night. Instead, they go bully netting. It takes special gear (see sidebar) and can only be done one hour after sunset until one hour before sunrise.

At night, lobsters make their nightly walks to new grounds and to feed. Done in four feet of water or less, bully netting uses a long-poled hooped net with underwater lights, and a pair of good eyes to bring lobster on the boat. Some people can use flashlights above the water, looking for glowing eyes, but the process works better with lights under the water.

Some tips from local bully netters include keeping the net part pointed toward the fisherman’s body so the part where the net and pole connects hits the lobster’s tentacles. They suggest going slowly into the water but then pushing down fast over the lobster when right above it. The point is to hit the frame of the net on the lobster’s tentacles so it spooks the lobster and it shoots back into the net. Once in the net, pull aboard to measure.

Another tip: don’t use super bright lights, because it will reflect the silt in the water making it harder to see. The plus side of bully netting is lobster hunters won’t get a sunburn. It’s cooler in the evenings than during the day. And, usually no one has to get their hair wet.

“We enjoy all the visitors here in the Keys during lobster mini-season,” said Monroe County Sheriff Rick Ramsay. “But we want to make sure everyone is aware of the law, and is behaving in a responsible, and safe, manner.”

In the Keys, the Sheriff’s Office works alongside the Coast Guard and FWC to make the season safe and peaceful. Expect to see officers everywhere — at boat ramps, bridges and on the water. In Marathon, staff and volunteers will be handing out pamphlets that outline the rules.

All Sheriff’s Office boats will be on patrol, and deputies will be operating a number of personal watercraft donated to the Sheriff’s Office by Riva Motorsports & Marine of the Keys. They donate WaveRunners each year to be used for law enforcement purposes such as this, as well as for regular patrols of hard-to-reach shoreline areas and residential canals. Anyone caught with illegal lobster will be charged accordingly.

The FWC will double the number of officers in the Florida Keys during sport season and for the first few weeks of regular season, according to Capt. Dave Dipre.

“We have at least one local on every boat, plus imported offers to assist them,” he said. “We want this to be a safe season.”

Marine thefts commonly happen in the Florida Keys and thieves may see mini-season as an opportunity to target people who aren’t being careful with their valuables. Boat owners are advised to remove electronics, fishing and diving gear from the boat when unoccupied and store this valuable equipment somewhere secure.

Before, during and just after the two-day season there will be more boats and trailers on the roads, and more traffic in general. Drive carefully: pay attention to those around you, be patient and don’t pass in no-passing zones. Drinking and driving is, of course, illegal; drunk boating is also illegal and marine officers will be watching for this dangerous behavior on the water as well.

GAUGE: Harvesters must have a gauge — even in the water — to measure the lobster.

3: The carapace of the lobster must be greater than 3 inches to be of legal size.

WHOLE: All recreationally harvested lobster must remain “whole” — don’t separate the tail from the body — while at sea. Also, don’t put them in a dive bag or the boat or the cooler if they are undersized.

0: It is illegal to possess an egg-bearing (pregnant) lobster. Eggs are orange or brown or red and cover the underside of the tail.

GEAR: Don’t use anything that would puncture, penetrate or crush the lobster exoskeleton.

$5: In addition to a saltwater fishing license ($17 for Florida residents), lobster harvesters must procure the $5 spiny lobster permit.

NO-NO: Lobsters love “casitas” — any man-made, artificial structure — but it is illegal to harvest them from artificial habitats. (Casitas can be made of anything — old appliances, heaps of concrete, etc.)

BIGGER NO-NO: It is a felony to molest, damage or take lobster from traps in state or federal waters.

LIFE OR DEATH: All divers and snorkelers are required to prominently display a diver down flag when people are in the water. Vessel operators must slow to idle speed within 100 yards of a dive flag.
For more information about the sport season in the Florida Keys, visit keyslobsterseason.com.

The post LOBSTER MINI-SEASON: EVERYTHING YOU NEED TO KNOW appeared first on Florida Keys Weekly Newspapers.