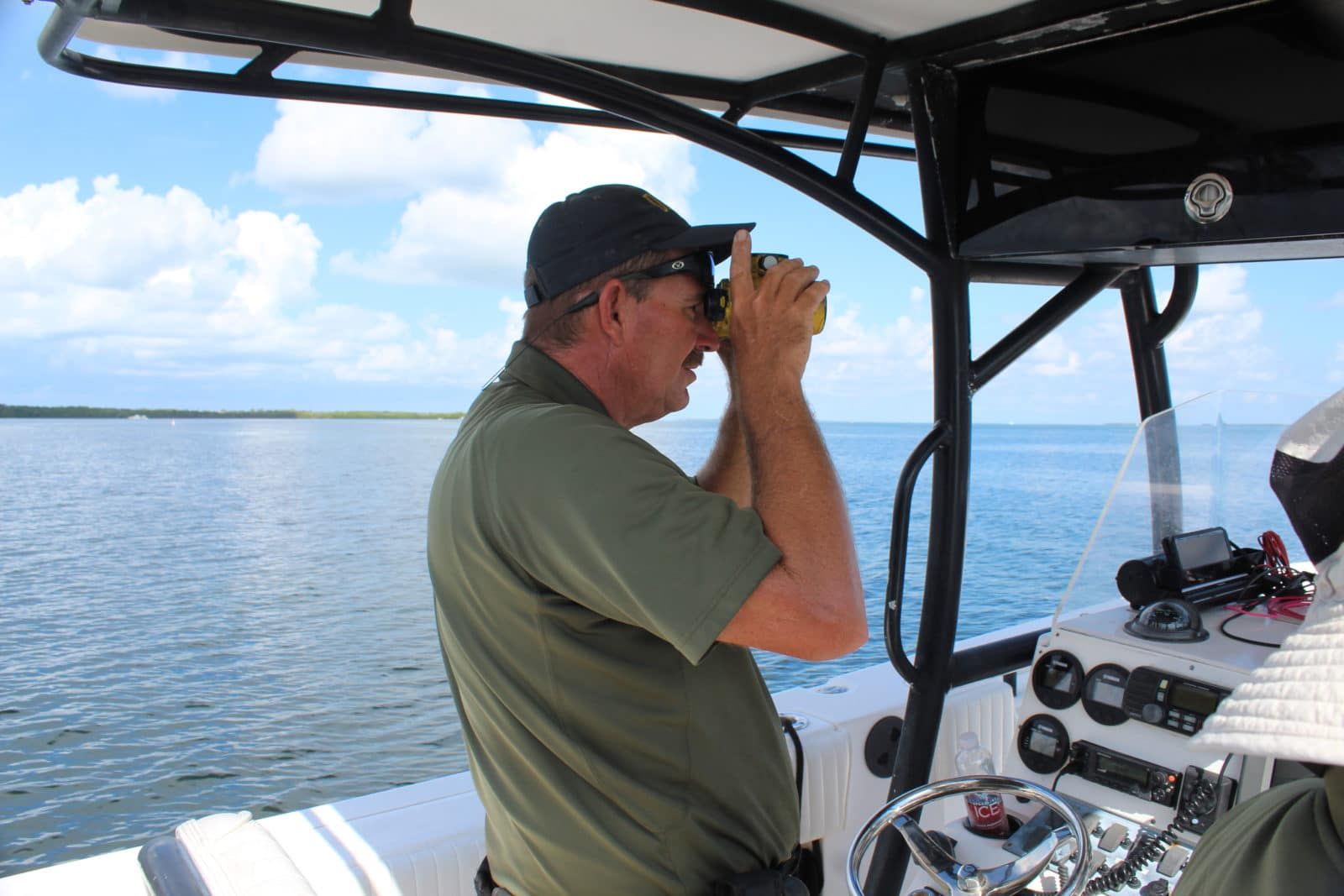 Marine patrols from various law enforcement agencies conducted resource checks and safety inspections during a busy two-day lobster mini-season in the Florida Keys. With citations came education for those unfamiliar with the rules and regulations.

Monroe County Sheriff’s marine deputies in the Upper Keys, Nelson Sanchez and Marty Digrus, departed from the Plantation Yacht Harbor dock in Islamorada for patrol on Thursday morning for day two of lobster mini-season. Sanchez has spent 20 of his 26 years with the Monroe County Sheriff’s Office working on the water. Digrus has spent the past eight of his 12 years with the sheriff’s office on a patrol boat.

The two-day season began on Wednesday, and Digrus said most people were following the rules and behaving. A few, however, needed correcting.

Sheriff’s deputies made roughly 190 stops during day one in the Florida Keys. Those led to two arrests and 10 citations that include mandatory notices to appear in court.

Two major incidents were also reported on day one, including the death of 35-year-old Emilio Gonzalo Perez, of Seawall’s Point, after he lost consciousness snorkeling for lobster near Sawyer Key. A short time later, on Wednesday morning, Trauma Star took 41-year-old Ricardo Maikel Rodriguez Leyva, 41, of Naples, to a Miami hospital after he was struck by a boat propeller off Cudjoe Key.

Sanchez and Digrus went right to work upon leaving the dock on Thursday, as they noticed two boats with people in the water and no diver-down flag visible. After educating the boaters, the pair sped off toward a boat that was thought to be lobstering illegally inside Everglades National Park. The two men had no lobster aboard or in their nets, and they subsequently left the park for another location.

“You’re faced with a whole set of rules and laws and different ordinances that pertain to only the marine side of it, and we have different jurisdictions that include state waters and federal waters,” Sanchez said. “We have our neighbor to the north of us, Everglades National Park, which is a hop and a step away that’s still in our jurisdiction.

“We have to give the rules to people who come down from other areas who don’t know much about it,” he continued. “Meanwhile the one that suffers is the resource.”

A local rule that keeps divers and snorkelers away from residential and commercial shorelines had many out-of-county visitors confused. Sanchez explained to two boats and a couple kayakers off Lower Matecumbe that they need to be outside the buoys that mark 300 feet from the shoreline.

In Islamorada, the rule applies during the lobster mini-season and the first five days of regular season, which begins Aug. 6. In Marathon, it applies only during the mini-season.

In Key West and unincorporated Monroe, it applies during the lobster mini-season and the first five days of the regular season. There’s an exception, however, for diving and snorkeling in front of his/her own property to the centerline of the canal or open water.

Sanchez emphasized to snorkelers and swimmers in Islamorada that the rule pertains to only diving or snorkeling within 300 feet of residential or commercial property. It has nothing to do with harvesting lobster and nothing to do with bully netting. The only caveat to that is “you’re not allowed to go on people’s property.”

“The bay bottom or ocean bottom belongs to somebody, whether it be the state or Florida or a property owner,” Sanchez said.

Then there were the lobster violations. After explaining the 300-foot rule to a group of young snorkelers and swimmers, Sanchez and Digrus proceeded over to a rental boat with four men aboard. They, too, were in violation of the 300-foot law.

After acknowledging they had lobster in the ice chest, Sanchez hopped over to check their catches and size. Sanchez asked one man to measure what appeared to be a legal-sized lobster with at least a 3-inch carapace. He then asked the man to measure a smaller lobster that didn’t meet the requirement.

Two  lobsters were found to be undersized. Sanchez explained to the men from central and northern Florida, that resource violations are arrestable offenses. Tickets were ultimately issued to the men.

“When I tell them to give me a little lobster and he measures and it drops off, we have some problems,” Sanchez said. “He was fumbling and wasn’t that aware of the law.”

Sanchez and Digrus continued on to tell two kayakers staying in Lower Matecumbe that they not only needed their fishing license to lobster, but they also needed a diver flag. They, too, were within 300 feet of residential property.

With resource checks and some education also came some smiles and laughs. A family of four out not far from Plantation Yacht Harbor hadn’t found any lobsters in the time they were on the water. When asked where the good lobsters are, the deputies responded, “Publix.”

Florida Fish & Wildlife Officer Bobby Dube said no major incidents have been reported as of late Thursday afternoon. Lots of citations were issued, however, for undersized lobsters.