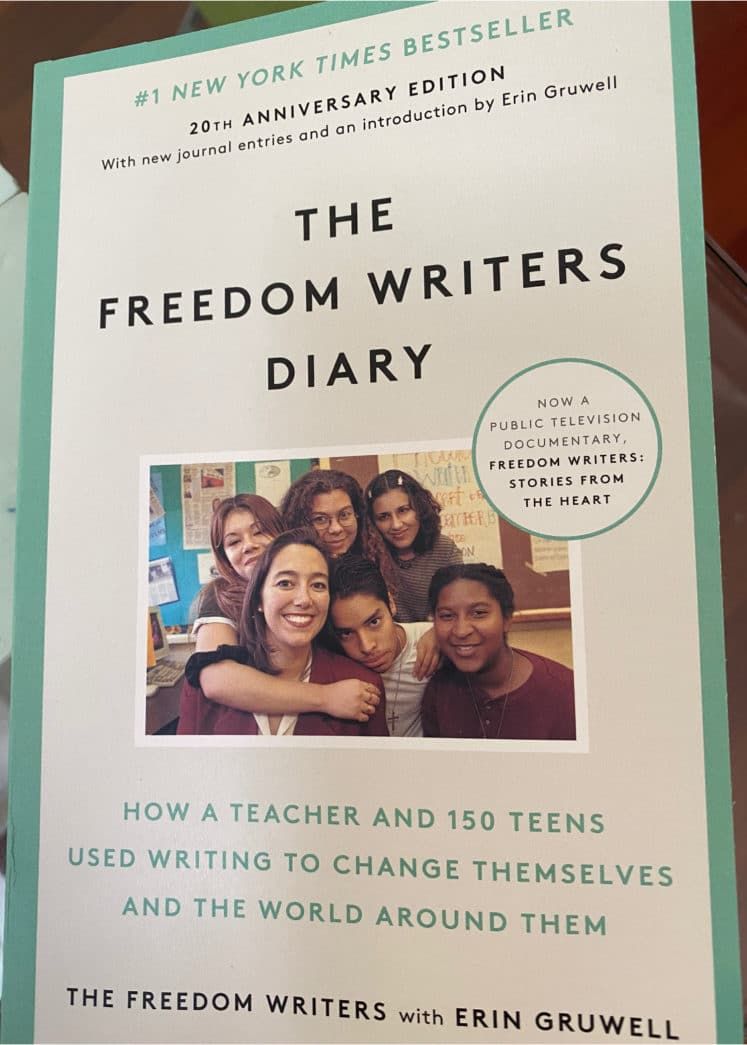 Remember the 2007 movie, “Freedom Writers,” with Hilary Swank as California teacher Erin Gruwell, who transformed a class of students that others had deemed “unteachable?”

The movie’s true story about Gruwell’s high school initiative that turned at-risk students into authors has grown exponentially into a global curriculum that trains teachers to transform students by introducing them to relevant reading material and the emotional release of writing.

Claire Schoonover, a Key West High School sophomore, was recently chosen as one of just 50 students worldwide to participate in this year’s Freedom Writers program. Schoonover wrote and submitted a story about overcoming dyslexia and learning to adjust her thinking so she could read and write even while her brain and eyes conspired against her and rearranged words and numbers.

Her story and those of the other 49 selected students will be published as a novel by Penguin-Random House Publishing next spring. The book, to be called “Dear Freedom Writer,” will also include responses to each student’s story from an original Freedom Writer and from Gruwell, who now teaches at a California university.

Gruwell met her original students in 1994 after all others had given up on them. She introduced reading material that was relevant to their lives in a racially divided, poverty-stricken area. Gruwell also helped her students keep journals and turn their struggles into stories that eventually were published in a book called the “Freedom Writers Diary.” The students named themselves the Freedom Writers as a tribute to the Freedom Riders who practiced civil disobedience in the 1960s by riding in the front of buses and other places blacks weren’t allowed.

The Freedom Writers program has grown from a single classroom in Long Beach, California in 1994 to a global movement and curriculum that trains teachers, provides scholarships and inspires students to engage in their surroundings and to share their stories of struggle, survival and success. All 150 of the original Freedom Writers overcame addiction, abuse, teen pregnancy and gang wars, and each of them graduated from high school in 1998 and became successful adults. Their book, the “Freedom Writers Diary” was published and became a New York Times bestseller, and then a Hollywood blockbuster.

“Claire and I will spend the next 10 months writing and editing her portion of the novel,” said Key West High School English teacher Kyla Shoemaker. “Claire meets every Saturday via Zoom with her fellow student authors from around the world and with Erin Gruwell, as well as the book’s New York City editor, to create a community and share their stories.”

Shoemaker also meets with the Freedom Writers and Freedom Writer teachers with Gruwell every Saturday to edit the stories and the responses.

“Once the book is released, the students, Freedom Writers and Freedom Writer teachers will travel together to Washington, D.C. to give the book to the President Joe Biden and First Lady Jill Biden, as well as other government officials (as the original Freedom Writers did when they wrote the first novel),” Shoemaker said.

Schoonover and the other 49 students each received a laptop from the Freedom Writers Foundation. Schoonover was surprised to receive hers, with the help of Jed Dodds from The Studios of Key West, from iconic author Judy Blume at Books & Books in Key West. Like most teens, Schoonover grew up reading Blume’s books and getting to know the books’ characters as well as her own friends.

Claire’s mom and stepdad, Robyn and Don Munce, along with Shoemaker and Blume, surprised her at Books & Books on a Sunday morning, May 16. “It’s so inspiring for me to meet young writers today,” Blume said, eager to learn more about the Freedom Writers program. “And of course, when the book is published, we’ll be proud to carry it here at Books & Books.”

The Freedom Writers and Gruwell remain close to this day. Many work with the Freedom Writers Foundation, speaking to schools and organizations through their outreach program and training teachers from all over the world.

They speak about topics such as homelessness, addiction recovery, bullying, depression and suicide awareness, and how to use storytelling to overcome adversity.