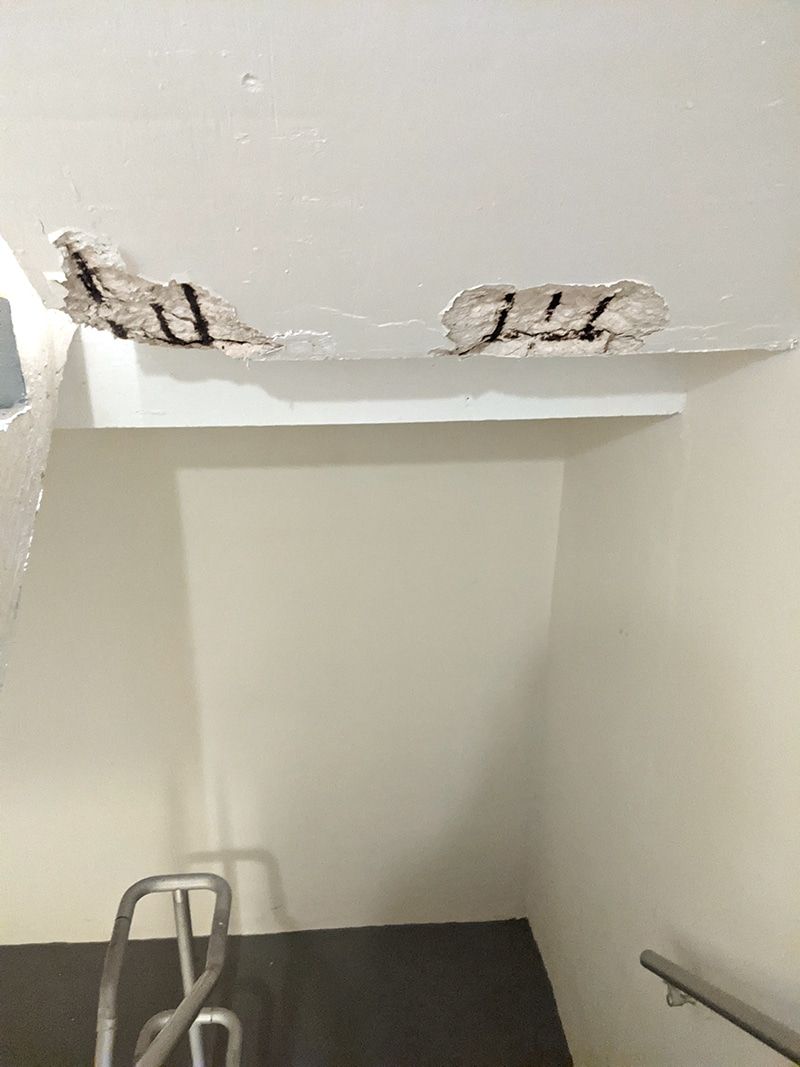 A New Town condo association has until Friday, Sept. 3 to prove its building is “safe for habitation.”

The city of Key West’s chief building official, Raj Ramsingh, sent a letter to Santa Clara Condominium Association on Friday, Aug. 27, demanding confirmation from the association’s engineer “that all or part of the building is safe for habitation.”

The 111-unit Santa Clara complex at 3312 Northside Dr. “is obviously in serious need of repairs, to the extent that I don’t think the repairs can be completed safely while the building is occupied,” Ramsingh wrote on Aug. 27. “I do not want to condemn this building because doing so would necessarily displace so many residents, but if I have to, I will.”

After receiving an “unfavorable report” from engineer JL Sanders, Ramsingh followed up the Aug. 27 letter with a Sept. 1 “Petition to declare the building unsafe/dwelling unfit for human habitation.”

The petition set a hearing date of 10 a.m. Sept. 13 and outlines concerns about exposed steel, major concrete cracks in walls and stairwells, unevenly distributed loads in the floors and ceilings and an unsafe stairwell.

“The building is believed to be dangerous/unfit,” the petition states.

The Aug. 27 letter states that on Aug. 25, Ramsingh received an engineering report from JL Sanders that was dated nearly a month earlier, on July 28.

In that report, JL Sanders describes a rapidly deteriorating building and an estimated $8.8 million of repairs that are immediately necessary.

The condo association’s board is holding an emergency meeting on Thursday, Sept. 2 to discuss the city’s latest letter. The board held a previous Zoom meeting with unit owners earlier in August to discuss the building’s deteriorating condition.

“We’ve been acutely aware of issues with our building,” said Travis Doll, a unit owner and vice president of the condo association’s board. “But it’s now gotten to the point where bigger repairs are needed and we’ve started talking with banks about getting an association loan for the $8.8 million.”

Those condo association fees currently range between $600 and $860 per month depending on the size of the unit. The fees bring in about $800,000 a year, prompting some owners to question what the property managers have been spending money on each year.

“We’ve reiterated with the ownership at large and with the city that we have completed major projects every year for the last several years,” Doll said. “Those projects and the increasing costs of construction and labor in Key West are where the owners’ money and dues are going.”

One unit owner who asked not to be identified said they are no longer staying at the unit they own.

“I’m afraid we are in dire straits of a building collapse,” the owner told the Keys Weekly, while pointing out a crumbling stairwell, a laundry room ceiling propped up by steel beams and exposed rebar in several places.

“”We’ve been pressuring our property management company, ICAMCO, to expedite the repairs to our more urgent projects, like those concerns mentioned by the city,” Doll said. “We’ve recently learned from a few of our main service vendors that ICAMCO has delayed certain projects that the board had already approved. Additionally, just a few days before the city’s visit and the recent letter from the city, we requested updates from ICAMCO on the prioritized projects.”

Doll told the Keys Weekly on Wednesday, Sept. 1 that Santa Clara had just received notice that ICAMCO was canceling its management contract with Santa Clara.

“Obviously everyone’s really nervous, given the tragedy in Miami,” Doll told the Keys Weekly. “Surfside has spooked everyone, but that is very much not the case with Santa Clara. We have no parking underneath and no pool leaking under the building. The engineers are using some scary language to spur a sense of urgency, and we’re stepping into high gear.

“The city has said they’ll help us with expediting permits,” Doll said. “The last thing the city wants to do is displace so many owners and tenants given the housing situation in Key West.”

Ramsingh acknowledged his reluctance to condemn the building in his Aug. 27 letter to the association.

Ramsingh ended his letter by writing, “Should the engineer recommend an evacuation of all or part of the building, the city will work with the board to help in any way we can in order to find a solution. … We are here to help, and most importantly, keep our citizens and residents safe.

“There is also an immediate safety concern with the access to the roof. I was able to get on the rooftop with ease as there is no locked door at the top of the stairwell. Children, or anyone for that matter, can access the unsecured rooftop and fall 7 stories down. This needs to be addressed immediately.”

The condo board had previously “asked ICAMCO to replace the locking door hardware on the roof. That was not done and we found the door secured with rope,” Doll told the Keys Weekly on Wednesday, Sept. 1.

Santa Clara is not alone

Despite the urgency of the city’s letter, Santa Clara Condominiums is not the only structure in Key West that concerns building officials. Immediately after the Surfside collapse on June 24, city officials conducted cursory inspections of about 38 aging Key West properties. The city’s building department notified the owners of nine of those properties of specific concerns and the need for an engineering report.

Engineering assessments are being collected and reviewed for each of those properties.

The city of Marathon also has taken action in the wake of the Surfside collapse that killed 98 people when most of the building collapsed.

On Aug. 10, the Marathon City Council passed a law requiring inspections of commercial and high-rise buildings erected more than 17 years ago.

Marathon’s law does not apply to residential units that are considered “minor” — occupied by 10 or fewer people, or 2,000 square feet or less.

According to Marathon Planning Director Brian Shea and Building Director Noe Martinez, the city is preparing the groundwork by coming up with form letters and ensuring engineers can sign in to the city’s software that governs building, code and permitting. More than 400 condo units have been targeted, as well as about 200 other commercial buildings in Marathon. Shea said the notices will probably be sent in batches, over a period of time.

Noe said the 17-year age requirement is based on his decades of experience in the building industry.

“If you move into a new home or building, it usually takes an average of 14 to 17 years before the owner begins renovating or fixing it up, and it also takes into account our aggressive climate,” Martinez said, adding that he knows the inspections, findings and fixes may be cumbersome for private owners. “I don’t have the luxury of special enforcement when it comes to health and safety.”

Martinez said he has already observed some older, two-story concrete buildings in Marathon with “bulging” walls that could indicate structural problems.