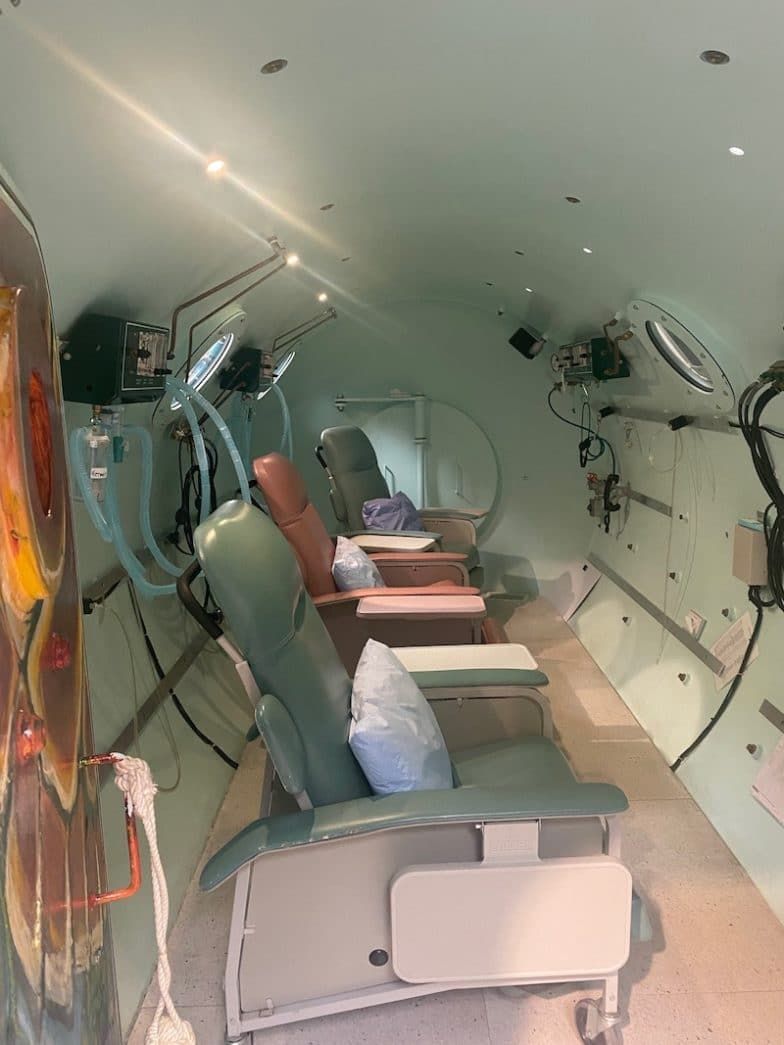 Hyperbaric Chamber. Just the name sounds intimidating. “Chamber” sounds like a prison, and “baric” sounds too much like “barbaric” or … ew … barium, that icky solution you have to drink before a CT Scan. And most of the time, hyperbaric chambers even look like … a coffin.

“Those are ‘monoplace chambers,’” said Scott Fowler, manager of Hyperbaric Medicine at Mariners. “Those are the most common hyperbaric chambers, and they look like clear coffins.”

Mariners Hospital in Tavernier has made a special effort to make its hyperbaric chamber experience more comfortable. First of all, the chamber is “multiplace,” meaning more than one patient at a time can sit in comfy chairs — at least three at once — and wear oxygen hoods together.

Also, the facility has inserted ambient lighting and portholes into the chamber “to put the patients at ease,” said Fowler.

But perhaps the most effective tool to “reduce the intimidation factor,” as Fowler puts it, is the mural painted on the outside of the chamber by artist Stacie Krupa in 2002. Dancing seahorses, fish and turtles swim in a seascape of blues, greens and yellows around the doorway of the chamber.

Mariners probably receives about 25 individuals per year for dive accidents. The hyperbaric chamber at Mariners Hospital in Tavernier is the only one for civilians in the Keys, and one of only three for civilians in Southeast Florida. The other two facilities with chambers are Mercy Miami Hospital and St. Mary’s Medical Center in Palm Beach.

“Everyone who dives creates bubbles in their system,” Fowler said, explaining the concept of decompression sickness. “If a diver comes up too quickly or stays too long, it’s like shaking a can of soda and the bubbles come rushing out. And then the bubbles lodge in the darnedest of places.”

The bubbles can lodge in body tissues and can cause anything from joint pain and rashes to paralysis and death — or blindness.

Two years ago, a man came into Tavernier’s Mariners Hospital to use its hyperbaric chamber. He had been struck blind during a local diving excursion.

The man was suffering from decompression sickness. In his case, a bubble had become lodged in his occipital lobe, affecting his vision. With treatment in the hyperbaric chamber, he was flooded with oxygen, which filtered the bubble out and reduced the swelling on the nerves in the occipital lobe.

“It took about three treatments before he was back to normal,” explained Fowler. “But sometimes it’s one and done, and we give them a high five. It’s a wonderful piece of medical equipment. We’re so happy to have it here. What does that sign say when you enter the Keys? We’re the dive capital of the world.”

The average person might connect hyperbaric chambers only with dive accidents, but they are also used successfully for wound care. In a hyperbaric chamber, oxygen containment hoods allow the patient to breathe under pressure — normally, humans breathe 21 percent oxygen. But the hood allows more oxygen to enter the patient’s respiratory system, supersaturating the blood supply and becoming a healing agent. The chamber helps bring tissue back, like with diabetic ulcers. In such a case, a patient with a wound will come to the chamber every day for 30 days, 2 hours at a time.

According to Fowler, dive accident patients are divided into three categories: minor, with one treatment needed; medium, with a treatment or two needed; and severe, with round-the-clock treatments needed.

“We are on call 24/7, 365 days a year for dive accidents,” he said. “It’s our community mandate. Many hospitals see that as losing money because you’re still paying staff even if you don’t have a treatment for a month.”

“They give up a lot of their personal time to be here in 30 minutes,” he said.

But most of all, Fowler wants the community to not be embarrassed and to come in if they feel pain after a diving excursion.

“We don’t berate them — we treat them,” he said. “There’s no bias at all. We don’t want people to be afraid of the chamber. It’s a safe and effective treatment. Don’t ignore the pain.”