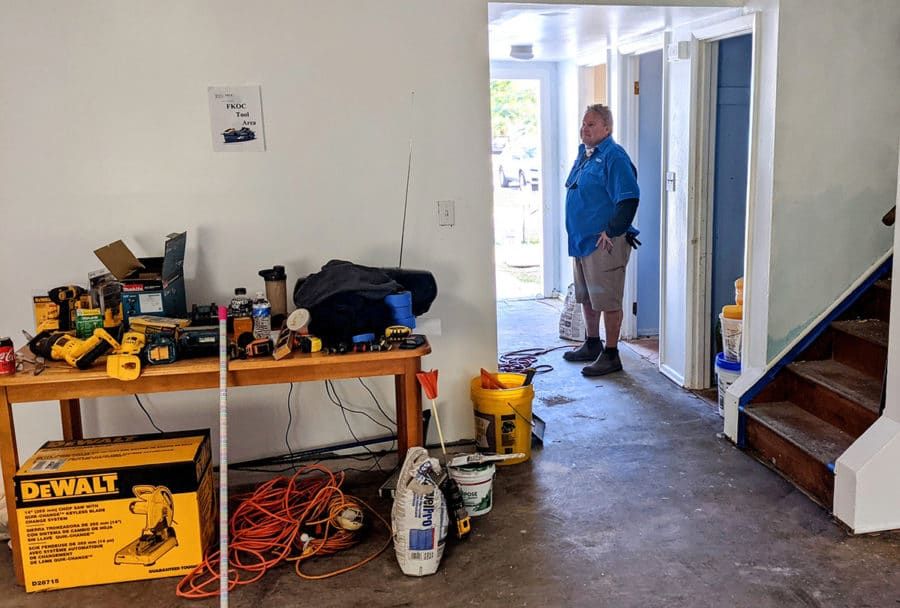 Two local nonprofits are working together, hoping to construct 235 new apartments for the Florida Keys Outreach Coalition for the Homeless.

The units would replace FKOC’s existing 95 apartments located at the former Navy property on Duck Avenue known as Poinciana Plaza.

FKOC is working with AH Monroe, which has significant experience — and success — in building affordable housing in Key West.

Transitional housing is designed to help homeless individuals and families move from the streets, their cars or homeless shelters into more suitable and supportive housing that can then be upgraded into permanent housing. Transitional housing helps ease the financial burden of first and last months’ rent and a security deposit that is often insurmountable for low-income individuals. Permanent housing is self-explanatory, but is also more affordable and income-restricted. “Then as people get further on their feet and self-sufficient, they can move somewhere else,” said Pridgen.

When FKOC’s existing 95 beds of transitional housing are at capacity, Pridgen said, then FKOC can’t relieve any pressure at the Keys Overnight Temporary Shelter (KOTS), which is located on the sheriff’s office property on College Road.

“So there forms a huge bottleneck and there’s no movement from the homeless shelter into transitional housing,” Pridgen said. “FKOC came to us and asked if we could help them find a way to increase their housing inventory, and I told them there’s a great deal of state and federal funding available for transitional housing. So now we’re in the process of redesigning the FKOC property at Poinciana Plaza on Duck Avenue. The city of Key West is all for it. They can currently house 95 people and we’re hoping to expand that to 235.”

The plan is to tear down the old cement Navy housing and replace it with something more modern and efficient, and thereby enable more movement from the homeless shelter to transitional housing, Pridgen told the Keys Weekly last week.

“This is a great collaboration between two local nonprofits,” Pridgen added. “And this is one of the things AH Monroe is very good at — finding the right projects to utilize available funding. It’s like putting a puzzle together and we’ve done very well with it in the past.”

AH Monroe, Pridgen said, is also still interested in developing housing for the city on the remaining 3.2 acres downtown at Truman Waterfront.

“We need to look at the city’s Request for Proposals for that specific property, and the city and its Bahama Village Redevelopment Advisory Committee need to decide how they want that process to go,” Pridgen said, adding that no nonprofits can build affordable housing at that property unless and until the city is able to grant a developer, whether private or nonprofit, a lease or some rights to the property for 50 to 99 years.

Currently, the city’s charter requires a voter referendum to approve any lease of city property longer than 10 years. “And no funding is going to be made available to a builder or developer who doesn’t have long-term control of the property,” Pridgen said.