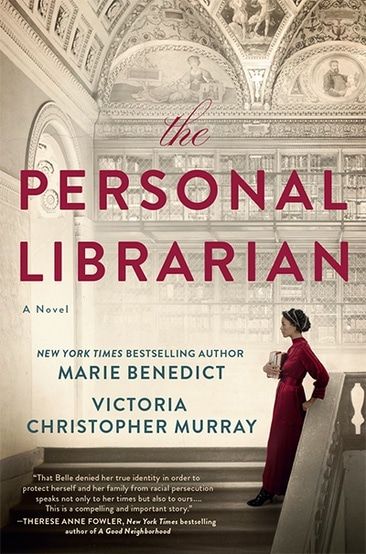 More than books and bricks, the public library offers services beyond the imagination. The cornerstone of any community, libraries provide technology, clubs, gaming, meeting spaces and universal access to information. In honor of the spectacular new Marathon Public Library, grab your card and pick up one of these new releases!

Belle da Costa Greene works as a librarian at Princeton University. A lovely young woman, she spends her days surrounded by books and rare manuscripts, history and art. In 1905, a friend refers Belle for a position as directress of his uncle’s private library. Working closely with the most powerful financier on Wall Street, J.P. Morgan, changes Belle’s future forever. Beautiful, intelligent and trusted she acquires worldwide treasure’s and helps to create one of the preeminent collections in the world. Rubbing shoulders with famous art dealers and gallerists, Belle becomes the most successful businesswoman of her time. But there is something Belle is hiding. Behind the silk curtains she is part of an African American family that has passed as white. As Belle’s father spent his life advocating for equal rights, her mother quietly changed the family’s name and history to reflect Portuguese descent and smudged their lineage enough to quiet any rumors. As the sole support of the family, Belle became expert at hiding her identity, she knew in her heart that Mr. Morgan would not overlook his racial prejudice. It became Belle’s lifelong mission to bury her secret while solidifying the future for The Morgan Library. Historical fiction at its very best.

The Overdue Life of Amy Byler
By Kelly Harms

What mom wouldn’t love a “Momspringa?!” When cardigan toting, soft spoken school librarian Amy Byler is offered a ticket to attend a reading conference in New York City, she jumps at the chance to have a desperately needed break. Three years ago her husband went on a business trip to Hong Kong and shockingly never returned. Without a moment to spare, Amy is busy raising her two children and working full time, she has become an expert at hiding her pain and denying herself any private life at all. When the “hot librarian” at the conference not only loves her ideas but invites her to coffee, Amy quickly reinvents herself via her best friend Talia who runs a popular woman’s magazine. Talia’s brilliant creation of #Momspringa is born and Amy’s trip is extended offering her a full makeover including highlights, spin classes and twitter dates. Her three days turns into weeks and this quiet librarian is ready to jump start a brand new chapter of her life. Absolutely unputdownable, laugh-out-loud beach read for any mom, booklover and believer of second chances.

Excited to begin her first job, Odile Souchet enters the American Library in Paris. It is 1939 and the world around her is crumbling. Her father thinks she should already be married, her twin brother Remy goes off to war and Odile begins a romance with a handsome French policeman. As Paris falls to the Nazi’s this group of dedicated librarians fight back the only way they know how – with books. They deliver books to those no longer able to enter the library. A deal is made with the inspector to protect the books as libraries are looted and destroyed. Books are sent to soldiers in hospitals and on the front lines. In 1983, Odile is a widow living in Montana. For years her reserved French manner has kept neighbors at a distance. Across the way young Lily is desperately trying to survive her awkward adolescence and seeks an unexpected friendship with Odile. She wants to learn French and ultimately discovers the truth of Odile’s difficult past. Based on actual events and alternating chapters between the past and present, The Paris Library is a passionate portrait of family, friendship and the unmistakable connection that books bring into our lives.