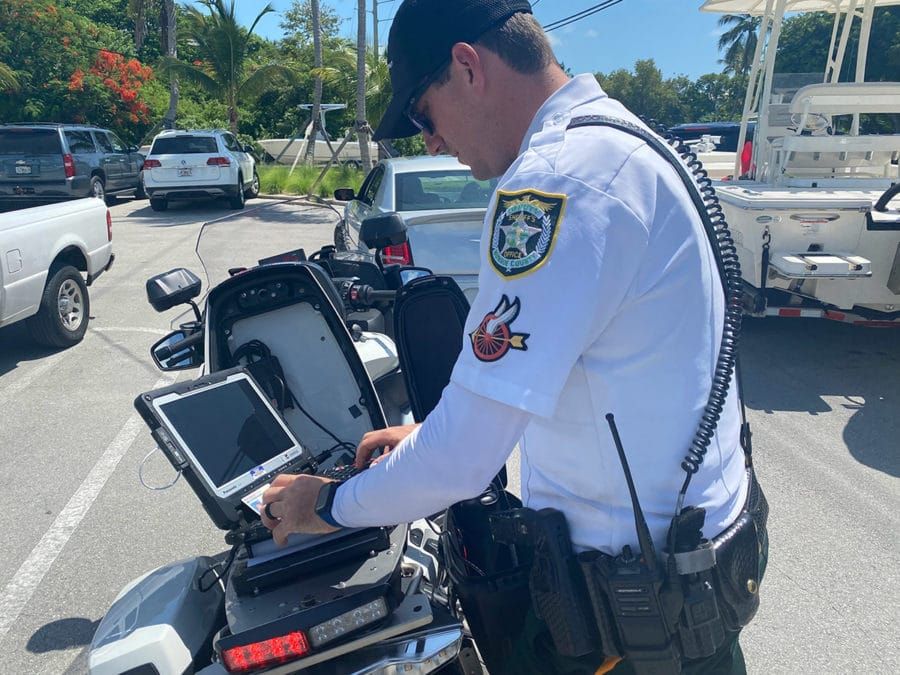 HIGHWAY HELL: A RIDE ALONG THROUGH A CONGESTED ISLAMORADA

One could call the two lanes of road through Islamorada a highway hell. For residents, it’s an all-too-familiar scene on weekends and holidays, as a seemingly endless line of vehicles crawl bumper to bumper south for roughly 13 miles.

Impatience takes over in some drivers who just spent a considerable amount of time making their way through Florida City and the 18-mile stretch. Other drivers unfamiliar with the Keys heed the advice of their GPS, veering off onto the Old Highway and putting the pedal to metal in hopes to cut their travel time by a few minutes.

Others take a more aggressive, and unsafe, approach due to their anxiousness, as they use center turn lanes to blow past vehicles. A recent ride-along with Monroe County Sheriff’s Sgt. Nick Whiteman in Islamorada would reveal these very instances.

Before taking to the road, Whiteman meets up with Deputy Ana Coello at the substation in Islamorada. She just finished her first traffic stop of the day, and it led to the arrest of a woman who was seen committing traffic violations. Coello noticed white powder on the female’s face. Investigation found what appeared to be cocaine in her possession.

It doesn’t take long for a traffic violation to occur upon Whiteman’s departure from the substation around noon on a Saturday after the two-day lobster mini-season. Traveling south, Whiteman, a 13-year deputy come October, meets up with Deputy Shaun Lones near Sandal Factory at MM 82.  Lones is part of a special traffic unit that roams sections of the Keys to assist where needed. Not only does Lones assist with crashes when Florida Highway Patrol can’t show up, but he also looks out for traffic offenders.

“I love the versatility of the job,” he said. “It varies every day. For me, I love it. I’m not one to sit behind the desk.”

While speaking with Lones,  a silver Chrysler 300 is spotted driving in the center lane heading north. Traffic is normally heavy going south, but the conclusion of lobster mini-season has a long line of traffic going north.

Hopping on his bike, Lones takes off after the vehicle and stops it in the Mangrove Mike’s parking lot. Whiteman follows to assist. The driver, who had a Class A CDL license out of New Jersey, was clocked going 60 mph down the center lane. Tickets were issued for speeding and illegal passing.

“One carries four points (on a license) and the other carries three points. It’s going to affect his driving status,” he said. “His wife was like, ‘Oh, but it’s going to hurt his license.’ I was like, ‘Ma’am, the way he’s driving, your husband’s going to hurt or kill someone if they pull out in front of him, so what’s more important?’”

Whiteman said there’s zero tolerance for passing in areas where it’s not legal, such as a middle turning lane.

Following the traffic stop, Lones heads north while Whiteman travels south to the Old Highway near MM 81 in anticipation of vehicles veering off to cut traffic. Positioning his SUV along the road, the radar picks up on a Range Rover going 46 mph in a 30 mph zone. A traffic stop commences to find a family from Tennessee driving a rental car trying to get to the airport. Several other speeders would give the same reason, including an Equinox going well over the speed limit.

A busy July in Islamorada brought 70 traffic stops by Whiteman, most of them on weekends. Between those stops and parking violations, he issued more than 40 citations last month. One of his busiest days was on July 18, a Sunday, when he conducted 18 traffic stops.

Whiteman and Coello would later meet up on the Old Highway to use a radar gun to detect speeders from a further distance. Six cars were pulled off the road for driving well above the speed limit. Several citations and warnings were issued by the two.

With traffic citations also came a number of parking tickets for trucks with boats parked in between the U.S. 1 shoulder and on the sidewalk. Three tickets were issued near WorldWide Sportsman to three trucks hauling boats.

A bike was stopped at Pierre’s after a call came in to dispatch of a reckless driver around MM 83. Whiteman spotted the biker heading south and conducted a traffic stop. He noticed the biker had his license tag flipped up, which is done to avoid tolls and from being spotted. A citation was issued for an improper tag display.

“An effort needs to be made when we get calls for reckless driving,” Whiteman said. “We do our best to find it. We encourage people to call in when they see it happen, but we still have to witness the violation occur.”

Most traffic stops conducted by Whiteman saw good conversation and some laughs. A blue Chevrolet was pulled over for speeding in a 30 mph zone. Whiteman, a University of Miami fan, noticed the Florida State University license plate on the vehicle. Instead of a ticket, the driver was given a warning. It contained a little message, however.

Weekends in Islamorada usually see three deputies patrolling the road and one on the water during the day.

The post HIGHWAY HELL: A RIDE ALONG THROUGH A CONGESTED ISLAMORADA appeared first on Florida Keys Weekly Newspapers.