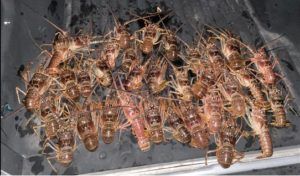 Hialeah man facing charges for possession of more than 30 lobster

A Hialeah man is facing charges after Florida Fish & Wildlife officers discovered no registration and lobsters totaling more than 30.

FWC Officers Jessica Diaz and Josh Stallings were conducting resource inspections at the Caribbean Club boat ramp in Key Largo during the early morning hours at 2 a.m on Aug. 17. Officers observed a vessel blacked out approaching the ramp without any visible navigation lights displayed.

Officers observed the man, later identified as Giovanni Jesus Pirez, 36, retrieve his vehicle and back his trailer in the water. Diaz then conducted a vessel stop and a subsequent resource inspection. The man indicated he was a commercial bully net fisherman.

FWC officers say that Pirez’s registration did not show the vessel was registered as a commercial vessel. He also did not have any commercial numbers or a bully net number decal. Officers ran his driver’s license number through FWC dispatch to find that it had expired by at least a year. He also had a confirmed warrant for his arrest issued out of Miami-Dade County.

Pirez had previous failures to appear on several traffic offenses in Miami-Dade County. Pirez was placed under arrest and transported to the Plantation Key Jail. Pirez was charged with possession of 33 over-the-limit lobster, no bully net license number, no commercial registration for the vessel and no numbers displayed on the vessel. He was also issued boating citations for safety gear.

The live lobsters were photographed and released back into the water.