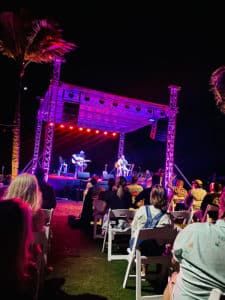 In late February, Lee Brice, one of country music’s most transcendent stars, performed live at Hawks Cay Resort’s “Keys To Country Live Music Series.” Just over 200 fans sat in lawn chairs under a picturesque island sky, as moonlight bounced across the glassy waters of Tom’s Harbor on Duck Key.

But for Hawks Cay, and much of the Middle Keys, hearing one of the biggest stars in the nation was more than just a memorable evening. It was proof that Marathon and the Middle Keys can, and do, showcase world-class music in the Florida Keys. Brice’s performance was the second installment of “Keys To Country.” A month prior, Easton Corbin, another country icon, headlined the inaugural event, immediately raising eyebrows across the Keys and beyond.

“We decided back in December to make ‘Keys To Country’ happen,” said Sheldon Suga, vice president and managing director at Hawks Cay Resort. “Our team witnessed the success of our Heroes Salute and we have a special group of people here. So once it was proposed in December, I said ‘let’s do it!’”.

The resort’s Heroes Salute, an annual outdoor tribute to military, fire and rescue, law enforcement and all medical personnel, has raised more than $40,000 for Firehouse Subs’ public safety foundation, which provides vital equipment to local fire stations in Islamorada and Conch Key.

“This is a wonderful community. I live in it and always want to be a part of it,” said Suga. “We take a lot of pride in supporting local charities. Producing Keys to Country can be a delicate balance, particularly with limited seats during social distancing. We want to offer locals and our guests an opportunity to attend, but during these difficult times we are trying to figure it out like everyone else.”

Suga says the Keys to Country series is more of an “adult-centric” event that celebrates the unique bond among the 280 employees at Hawks Cay — all of whom Suga is proud to say he knows by name.

For now, the event offers about 200 seats, but without social distancing restrictions, the Hawks Cay event lawn can accommodate up to 500 seats. And while the series doesn’t necessarily share the same philanthropic vein as their Heroes Salute, Suga says bringing national country music stars to the Middle Keys will only help bolster the Middle Keys.

“It’s not just about us,” said Suga. “It’s about bringing attention to the Keys and putting eyes on us as a destination.”

The next Keys to Country shows take place Friday, April 23 and Saturday, April 24, featuring The Warren Brothers, who have written hits for the likes of Tim McGraw, Dierks Bentley and Blake Shelton. Their songs have also been recorded by Luke Bryan, Cole Swindell, Billy Currington and many others. No matter how bright the star power from the Hawks Cay stage, Suga maintains it all comes down to his workers.

“Right now we just want to offer everything for the guest experience, no matter who is here,” he said. “Even Keys to Country is a guest experience. We have a unique staff culture and it really is about taking care of each other and looking out for one another. That’s the significant difference we can all make.”

For more on the Keys to Country Live Music Series visit hawkscay.com and stay tuned for additional names and lineups.