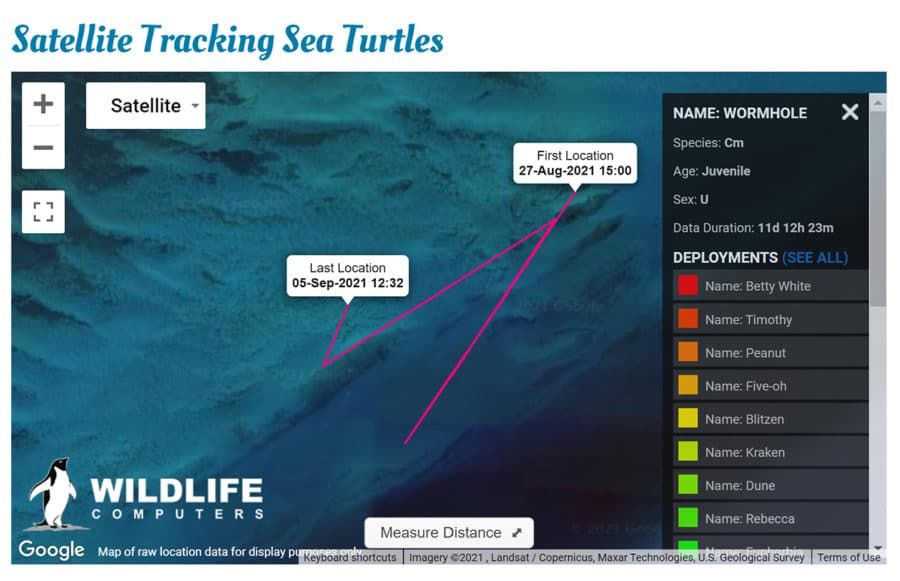 “This is a repeat offender or ‘habitual hooker,’ as we call it,” said Whitney Crowder, a sea turtle rehabilitation coordinator from the Gumbo Limbo Nature Center in Boca Raton. A boatful of Keys locals chuckled as Crowder continued talking about a juvenile green sea turtle named Wormhole. “It does not learn very well and has been caught at least five times on fishing hooks — that we know about. One of the times even has a police report attached to it.”

Jokes aside, Crowder and her colleague Maria Chadam, a sea turtle veterinarian from the nature center, visited the Keys at the end of August with one mission in mind: to convert Wormhole, their problematic, frequently-hooked sea turtle, into a Keys local. They transported the turtle via van to the Florida Institute of Oceanography at the Keys Marine Laboratory (KML) in Layton for release on a nearby reef.

“Wormhole was a hot mess,” said Chadam. “We brought it here because it’s been caught five times. Last time, we released it two hours north of us and, in less than a week, it made it back to us in Boca and got hooked again. With the blessing of the FWC, we came up with an alternative release location to deter it from our fishing piers: the Keys!”

Before moving to Boca, Crowder had spent seven years in the Keys, working at the Turtle Hospital in Marathon and the Florida Fish and Wildlife Research Institute. Her husband used to work at KML. So when she needed help finding her problematic patient a new home, Crowder leaned on old Keys friends.

Cindy Lewis, the director of KML, donated the release boat and coordinated logistics. She also selected the release site: a shallow, grassy, nearshore reef spot called Stag Party. Lewis and her staff had seen other juvenile greens “hunkered down, sleeping” on these and nearby reefs. This is a good sign, Crowder explained, because it means the habitat is known for turtles of this size and species.

Sea turtles that aren’t returned to the same reefs or locations they were collected from still need to be released to “suitable habitat,” Crowder said. Suitability varies depending on sea turtle species and size class, and each has a different type of preferred habitat. For a juvenile green like Wormhole, reefs like those in the Keys work just fine, she said. These shallow habitats have lots of algae and seagrass for juvenile turtles to forage in.

The hope is that Wormhole will take a liking to our local reefs and take up residency; more importantly, everyone has their fingers crossed that the “naughty” reptile won’t return to Boca and get caught up (literally) in more troubling situations.

Lewis had also witnessed juvenile Hawksbill sea turtles on our local reefs, which proved helpful for Queen Elizabeth, a second turtle brought down by Crowder and Chadam for release in the Keys. Queen’s backstory also involves negative human interactions, but this time with plastics instead of fishing lines.

“Queen was barely as big as the palm of your hand upon arrival, and we immediately discovered plastic ingestion was the cause of illness,” Crowder said. “Throughout rehabilitation, Queen passed over 50 pieces of hard and soft plastics of all shapes and sizes.”

The sea turtle expert noted that discarded plastics have been found in almost every single one of the tiny sea turtles that the nature center treats and that the pollution crisis will continue to have a huge detrimental effect on sea turtle populations unless we can collectively work together to find solutions.

“This turtle is one of the lucky ones,” she said of Queen, who made a full recovery at the nature center and gained a lot of mass, making the critically-endangered turtle eligible for release in the Keys.

Crowder and Lewis decided to release Wormhole and Queen Elizabeth together. Support from the Friends of Gumbo Limbo and the Florida Institute of Oceanography at the Keys Marine Laboratory allowed for the successful return of both patients to the sea.

“This is our way of giving back to other agencies,” said Lewis. “It’s so important to help any agencies with endangered species. I know how difficult it can be to find funding at any time. This gave us an opportunity to share a solid experience.”

While Queen Elizabeth was too small for tracking, Wormhole was fitted with an acoustic tag and a satellite transmitter so that Crowder, Chadam and curious others can follow along. So far, it looks like she’s adapting well and not leaving the Keys.

“Wormhole is still in the same spot, which means so far it’s a success!!!” said Crowder. “We might have turned her into a Keys critter after all.”You can follow Wormhole’s adventures and (hopefully only local) travels here: https://www.gumbolimbo.org/satellite-tracking. All sea turtle work performed under appropriate state and federal permits.