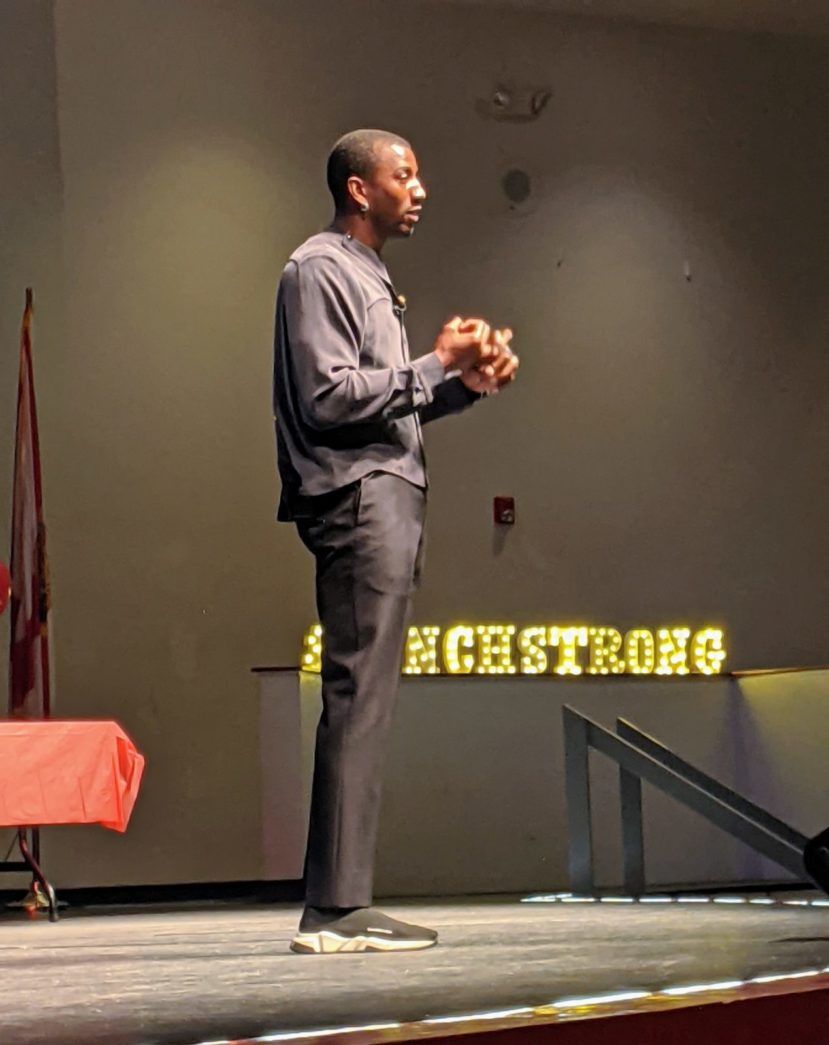 “Be the coffee beans.”

It was an odd but effective message to come from a former New England Patriots wide receiver. But then again, Malcolm Mitchell’s career trajectory has also been odd, but extremely effective.

Mitchell spoke Monday at a back-to-school rally for Monroe County School District teachers, staff and members of the high school football teams. He was at Key West High School early Monday morning and at Coral Shores in the afternoon.

Having excelled at sports, particularly football, while growing up with a single mom and two siblings, Mitchell and his family moved in with his grandmother in Valdosta, Georgia.

“Before we moved to Valdosta, Georgia, I lived in Tampa, Florida,” Mitchell told the packed auditorium. “My mom had gotten divorced and we were a little lost, with nowhere to go, staying in friends’ homes and on couches. Then my grandmother saved us. She invited us to live with her in Valdosta. When I was 15, my grandmother told me she’d be around long enough to see my dreams come true.

“In 2016, I was drafted by the New England Patriots. She died a month later. And today’s her birthday,” Mitchell said, pausing for a prayer for his grandmother.

But back to being the coffee beans.

Mitchell told a story his mother had told him when he was a kid:

A little boy gets home from school very sad and upset. His mom sits him at the kitchen table and starts three pots of water boiling on the stove. She places a carrot in one, an egg in the next and a handful of coffee beans in the third.

After boiling for several minutes, the mother removed each pot from the stove.

“When facing adversity and obstacles and discomfort — such as boiling water — the carrot yields and becomes soft. The egg becomes hard inside and out. But the adversity didn’t change the coffee beans. Indeed, the beans changed their adverse surroundings.

“Be the coffee beans. Change the situation around you,” was Mitchell’s message.

Mitchell revealed that when he had started college at University of Georgia, where he also played football, and showed up at his first English class, “I could only read at a junior high level. I couldn’t read nearly as well as the girl reading aloud in class. And the competitor in me wasn’t going to let that happen.”

Mitchell joined a monthly book club after meeting a woman in Barnes & Noble. He was the only man and the youngest in the group by a generation.

But that’s when Mitchell realized that reading had the power to change lives.

“I was called a nerd for the first time in my life, and it was a badge of honor for me,” he told the Key West High School audience. “When I was growing up, reading was for straight-A students. Reading was for people who wore glasses. I didn’t realize its universal power for everyone. I still watch every movie with subtitles to continue reading. For me, reading broke down all the barriers that my statistics had predicted: Disadvantaged, African-American boy, from a single-mother home, no access to my father. But by learning to read, those statistics are no longer relevant.”

When knee injuries forced him to retire from the NFL after a stellar 2016 season and a  2017 Super Bowl win over the Atlanta Falcons, Mitchell found his true calling.

He wrote a culturally relevant children’s book, “The Magician’s Hat,” and created the Read With Malcolm literacy program and Share the Magic Foundation.

“Share the Magic Foundation’s mission is to unlock the potential of young lives through literacy,” says the foundation’s website. “By introducing book ownership to students in households where reading is not a priority and inspiring below grade-level readings through innovative and inclusive literacy programming, students at risk of academic failure are empowered to read to a better future.”

Read With Malcolm and its national sponsors provide free books to kids, as well as in-school lessons and virtual reading challenges.

Since its inception, the foundation has served more than 293,000 students.

At the end of his speech, Mitchell answered questions and told a requisite Tom Brady story:

“Our lockers were right next to each other, which was intentional since I was the new guy,” Mitchell said. “One day I was complaining about my neck hurting, and Tom asked me, ‘What kind of pillow do you use?’

“I shrugged and told him, ‘Whatever’s on the bed.’ I certainly had never been pillow-shopping at Bed, Bath & Beyond. But the next day, Tom handed me a fancy, new, extra-long, bamboo pillow. I still have it. Now it’s flat and is looking beat up, and my girlfriend said I needed to get rid of that pillow. I told her, ‘No way, never. That’s my Tom Brady pillow.’”

Before he left the stage, Mitchell reminded every teacher in the room, “We’re going to have to choose every day to be the coffee beans. And you all have the power to completely change the trajectory of a child’s life. And I’d like to help you do it.”