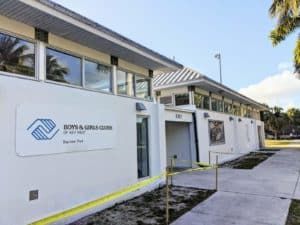 The former director of the Southernmost Boys & Girls Club was arrested Friday, for allegedly stealing at least $41,000 from the nonprofit that provides after-school and summertime care for children of working families.

The criminal investigation into Dombroski’s action started in September 2019, but suspicion of Dombroski began in 2018, when the chairman of the club’s board, William Archer, discovered several alarming financial matters.

Upon learning that Dombroski had stopped making payments to the pension fund for club employees two years prior, Archer asked the local club’s parent organization, Boys & Club of America, to send an audit team to investigate the Key West club’s finances.

When Archer asked Dombroski about the pension fund payments, Dombroski “told Archer that they did not have the money for it, but also never provided Archer with a good explanation as to why they were not able to pay it. Dombroski served as the Executive Director of the Southernmost Boys and Girls Club for approximately 15 years and during this time had complete control over the finances with no checks and balances,” states the arrest affidavit that State Attorney Dennis Ward provided to the Keys Weekly.

“The Boys and Girls Club of America audit team conducted their investigation and informed Archer they found several ‘threads’ of money being withdrawn, with no correlating receipts/invoices to account for the expenditures, but no patterns,” the affidavit states.

The local board of directors placed Dombroski on probation and took away his authority to handle financial matters, the affidavit states.

On a day that Dombroski was not at the club, Archer began looking through 2018 financial files, and discovered a stack of documents that had not been provided to the auditors.

“Included in the documents were numerous Boys and Girls Club checks made payable to Dombroski. Archer stated most of the documents were reimbursements made to Dombroski for cash transactions that never took place. Dombroski previously opened an American Express credit card for the Southernmost Boys and Girls Club. Business cards were given to Archer, Cecelia Williamson, Susan Kent and Daniel Dombroski. All credit card statements went solely to Dombroski. In addition to reimbursing himself for cash transactions that never took place, Dombroski would pay for items for the club using the card and then reimburse himself for the

transactions as if cash was paid. The Boys and Girls Club would pay the credit card bill in full each month,” states the affidavit.

“In addition to using the business American Express for purchases and then reimbursing himself with a check, Dombroski would pay invoices from vendors and businesses with the Southernmost Boys and Girls Club checks and later submit reimbursement checks, made payable to himself, for those invoices. Dombroski would also write reimbursement checks to himself for petty cash payments. There is no record of Dombroski using his personal bank account to make any payments on behalf of the Boys and Girls Club,” the affidavit states.

“In approximately a four-year span, the Boys and Girls Club issued checks payable to petty cash for $68,044. Approximately $41,117 in cash deposits were made into Lori and Daniel Dombroski’s First State Bank account, which was unsupported by any other known financial employment by Daniel Dombroski,” the affidavit states.

An arrest warrant was issued on July 15 and Dombroski was arrested just after 10 p.m. on Friday, July 16 at his Big Pine home. An arraignment is scheduled for July 30.

Keys Weekly attempted to reach Dombroksi on Saturday, July 17, but received a recording saying, the number was “not in service.”