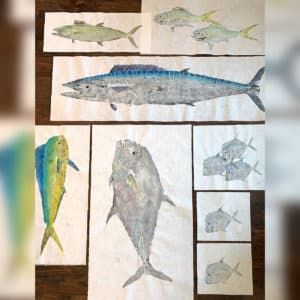 FISHING COMMUNITY RALLIES BEHIND ARTIST WHO LOST MONTHS OF WORK

Imagine this: You are a fine-arts painter during the pandemic. Quarantined at home, you cast about for something to do, just like the rest of the world. Then — bingo — you stumble onto a new painting technique and become obsessed.

Feverishly perfecting your work and making print after beautiful print, a gallery owner falls in love with your paintings, then requests a shipment so they can be displayed in the gallery.

You roll up all your paintings in a tube and confidently ship all paintings via FedEx — dutifully requesting tracking information and insurance.

Then the entire shipment is lost. The paintings are never found, and FedEx throws up its hands, saying nothing can be done.

This nightmare happened to Lisa Lee Herman, a gyotaku artist and owner of Islamorada’s Gallery of the Arts.

“It’ll be six weeks tomorrow,” she told Keys Weekly with a sigh. “I don’t think I’ll ever be over it. But it’s a blessing in disguise. It’s been awesome that the community has rallied. I feel so loved.”

Originally from Fort Lauderdale, Herman is a lifelong artist and fisherwoman who took a gamble by moving to the Florida Keys and starting the Gallery of the Arts in November 2016. During the pandemic she fell in love with gyotaku, a traditional Japanese art form that dates to the mid-1800s and originated because fishermen wanted to record their catches.

Once Herman taught herself how to do it, she networked with locals in the fishing industry. They would call her when they had a special catch so she could practice her art.

With the just-caught catch right in front of her – even right on a dock — she washes the fish with non-toxic paint. She presses a special Japanese paper on top, then gently peels it off. She has made such prints of everything from mahi to African pompano.

About two months ago, Herman sold 12 of these paintings for thousands of dollars to Gigi Sireyjol-Horsley, the owner of Paysage Home, a gallery space in Wilmington, North Carolina. Herman shipped one tube of all 12 paintings from PostNet in Islamorada, then watched the shipment every day using the FedEx online tracking.

FedEx’s site said the paintings were delivered to Paysage on Friday, March 4. So Herman expected to call the gallery on Monday, March 7, to firm up details.

No dice. To Herman’s dismay, the gallery told her that they never got her paintings.

Seeing that the FedEx tracking information recorded the shipment as being delivered, Herman tried to get to the bottom of the mystery. “I’ve been on the phone with 40 different employees. FedEx said that it was delivered on that Friday. But I tell them it wasn’t. And the only response I get is, ‘Take it up with claims.’”

Herman learned that the last place that the tube was scanned was in Wilmington, NC, a mere few minutes’ drive from the gallery.

“I’ve asked them, ‘Can you go around the route and ask if anyone’s seen it?’ And they said, ‘Yeah, we could, but it’s not part of our policy. Take it up with claims.’ And claims has not called me back.”

Not to be deterred from fulfilling her agreement to Paysage, Herman emptied out her gallery of the rest of her gyotaku paintings, drove to Wilmington from the Keys with her fiance and delivered them safely during a whirlwind 24-hour trip.

Like a dog on a bone, Herman even stopped at the FedEx facility in Wilmington where the paintings were last seen and asked for help. Employees told her the same thing, “Take it up with claims.”

The paintings are still lost. Herman may get some insurance money back for a nominal amount, but she points out that they have sentimental value that money can’t buy. For example, one of the lost paintings was of the largest dolphin caught in the Fish for Holly sailfish tournament.

But Herman said she knows the situation could have been worse; the lost shipment could have been a crucial delivery of medicine for a family member. And she keeps in mind that so many people have had difficult times during the pandemic.

And there’s a silver lining. Her network has come through. After posting a call for fish on social media, friends including the Postcard Inn tackle center, Yabba Dabba Doo Charters, Charisma Sportfishing, Capt. Perry Scuderi, Capt. Matt Bellinger, Capt. Tony Young and many more beckoned her when they had a fish for her to print.

“I want everyone to know how appreciative I am of the community rallying together,” Herman said. “Literally, my walls went from blank to stocked in a few weeks. Just mind-blowing.”

And perhaps the best part is the practical lesson she learned. “I’ll never send more than two pieces in a tube again. Ever,” she said emphatically. “And if I get another art show, I will either drop it there myself or fly in there myself.”

Keys Weekly reached out to FedEx for a comment on the lost shipment.

“The safe and secure transport of our customers’ shipments is one of our top priorities,” stated Meredith Miller, manager of external communications for FedEx Ground. “Regretfully, despite attempts to recover this particular shipment, our efforts have been unsuccessful. We have been in direct contact with Ms. Herman to apologize for this inconvenience and clarify the status of this matter.”

Gallery of the Arts is located at 88975 Overseas Highway, Tavernier, oceanside, and is open for visits Monday through Saturday, 11 a.m. to 4 p.m. For more information, go to Galleryoftheartsislamorada.com. For pricing information on paintings, call Herman at 954-261-5167.