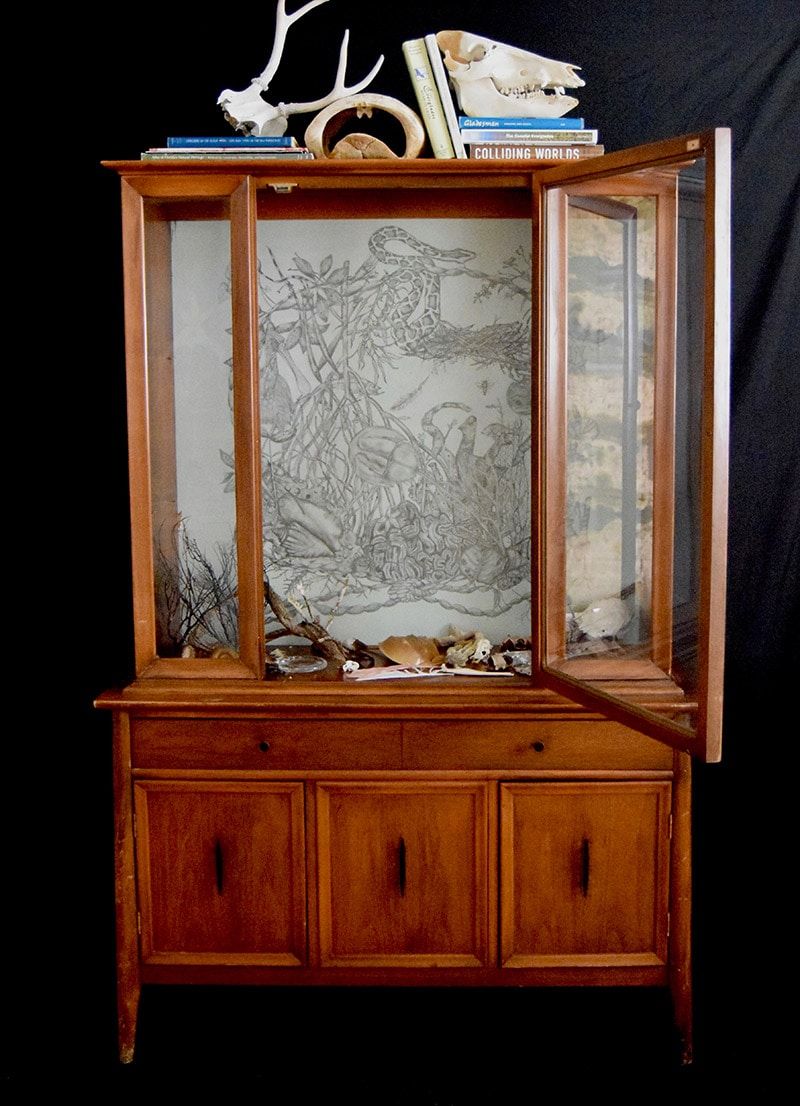 Florida is one long, downhill slide, at least in an environmental sense. What happens in the Central Florida ranch lands affects Lake Okeechobee, which affects the sod farms south of the lake, which affects the Everglades, which affects Florida Bay, which affects the Keys and its reefs and, in somewhat diminishing amplitudes, the rest of the world. Places overlap and ecosystems blur together. Attempts to discern and define the boundaries of each is the road to madness, or at least the road to seriously befuddling cognitive dissonance.

Deborah Mitchell has spent the last few years delving into the heart of wild Florida, plumbing its mysteries in a decidedly un-befuddled manner. She’s been taking in the vastness and the vicissitudes of it all, as well as its specifics, having conversations with scientists, activists and other artists, honing in on the overarching interconnectedness of these ecosystems, the damage we have done to them, and the hopes we might have to fix them.

Her show “Wild Observations: New Works,” in the Sanger Gallery at The Studios of Key West through May 27 is the result of those explorations.

The exhibition consists of a combination of paintings, photo-based work, installations and videos. Silhouettes of endangered seaside sparrows are spray painted over faded wallpaper. A curio cabinet is filled with skins and shells and feathers. Cyanotypes of moths and ferns overlay long Spanish texts. Pie charts loom in a cloud-covered sky. A timeline of the fall and rise of the red-cockaded woodpecker is stenciled over a painting of the bird in its habitat.

A barnacle-encrusted patio table becomes an altar to a beleaguered fishery.

Where other artists will work a specific medium or a stylistic vein, Mitchell is working subject matter – activism merging with science merging with art.

“I’m a little bit of a jack of all trades, master of none. And I actually really like it that way,” said Mitchell. “I don’t know that I could ever be someone who is so detail-oriented that I could just stay in painting or stay in photography and do it really well and make it perfect. I’m really just interested in and curious about different things all at once.”

Bird migration captured a young Mitchell’s attention during her family’s annual treks between Canada and South Florida, as she watched them fly next to and over the car. Her family moved to Pompano Beach when she was 7.

In her late teens she moved to New York City briefly, then spent seven years in Milan modeling clothing for FILA sportswear. She began sketching and painting watercolors between shoots and eventually found herself far more interested in that than standing in front of a camera.

When she returned home to South Florida, Mitchell met her future husband, Raul Puig, an attorney. The two have lived in Miami Beach since the early 1990s.

Mitchell said her current art practice evolved out of her dating life and child rearing.

“When my husband and I met, we would each design dates and always try to make it more and more interesting. And one of the things that was pretty much guaranteed for us was going out in the Glades and hiking, biking, birdwatching or fishing. It was always the foundation of our relationship, and we’ve been married for 31 years,” said Mitchell.

“When our son came along 21 years ago, I just felt like, ‘OK, now I really have to up my game. Now I have to know all the coolest places to show him.’ We never took him to Disney World. We always took him to the Glades,” Mitchell said.

She has fond memories of searching for a ghost orchid with him from a double kayak.

“I dragged him around so much he was like, ‘Yeah, yeah, I got it. Woodpeckers,’” she said.

Throughout all this, Mitchell’s sense of protectiveness for the wild areas grew. And her profound curiosity about how the varied ecosystems all linked together galvanized an urge to make art that mattered.

“I felt it’s my obligation to help people understand the issues through my artwork,” Mitchell said.

The idea for “Wild Observations” occurred to Mitchell over coffee one day with a senior biologist at Archbold Biological Station in the Lake Wales Ridge region, just north of Okeechobee. She’d been trying to figure out how to geographically expand the scope of her projects beyond Big Cypress and Everglades National Park, which had been her focus for 10-plus years.

“(The biologist) thought my work could benefit from spending more time at the field station with scientists to figure out exactly where I should put my energies,” said Mitchell. “So I thought about that and came up with this theme.”

Mitchell said “Wild Observations” is something of an umbrella concept. The work isn’t a traveling exhibit so much as a series of works that can be revised, edited and recombined for different communities.

“It’s designed to go to different locations and to reach different people with different interests. Not to preach to the choir, but to try and get people to explore their inner steward and to maybe be a little more in love and interested in things via the arts,” Mitchell said.

The work has shown at the MIA Galleries at Miami International Airport, and will show in Everglades National Park in December.

“I’m 56 and came up with it a couple of years ago. Plus, I could work on it for, like, a decade. Or longer. I wanted something that’s got legs and that I could continue to build upon,” she said.

“There’s never any shortage of fights to fight, that’s for sure,” Mitchell said. “I can’t fight in a courtroom, but I can do this. I can have people walk into the gallery and be curious about what we’re showing and have them read a little bit more and learn a little bit more.”