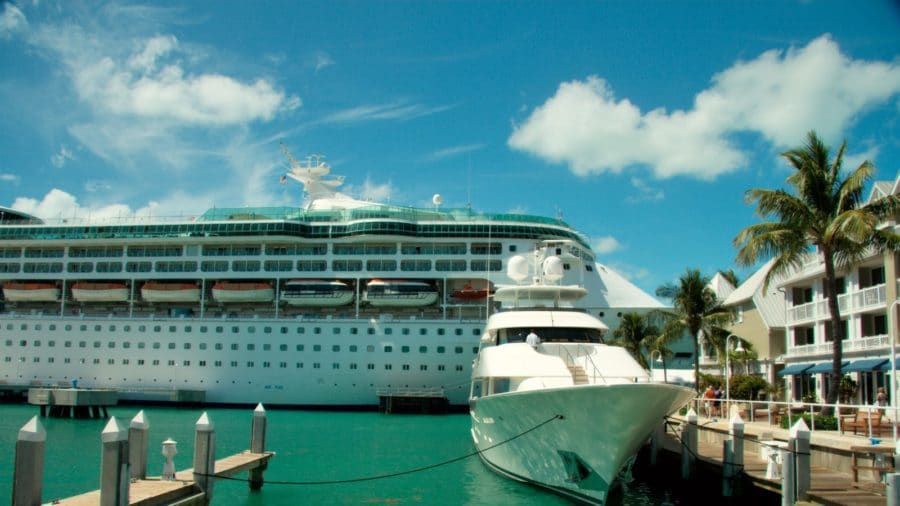 The committee that spearheaded Key West’s cruise ship reductions is downplaying the potential costs of a lawsuit city officials expect from the owners of Pier B if forced to turn away their cruise ship clients.

City attorney Shawn Smith has repeatedly warned the city commissioners to expect a lawsuit from Pier B involving breach-of-contract and interstate commerce claims.

But Arlo Haskell, treasurer and cofounder of the Key West Committee for Safer Cleaner Ships told the Keys Weekly on July 31, “‘breach of contract’ is more bluster without any significant basis in fact or the law. If (Pier B owner Mark) Walsh had such a slam-dunk legal case to successfully challenge the limits, why did he spend so much time and money getting the legislature to make up a brand-new law (that voids the voter-approved cruise ship initiative)?”

“The people who are warning about massive damages are the same people who said 800 people would lose their jobs, who said property taxes would go up, who said EMS budgets and public services would be slashed,” Haskell added.

The city of Key West is currently proposed anb 8% tax hike, but that figure could be lowered before the final budget approval in September.

In a Tuesday email, the Safer Cleaner Ships committee updated its supporters about where things stand with cruise ship reductions since the city’s July 12 workshop and questioned the city attorney’s delay in drafting the cruise ship ordinances, which were not included on the city commission agenda for that evening’s meeting. But Smith has been on “a well-deserved vacation,” for the first time in years, city commissioner Greg Davila said.

“Commissioners directed City Attorney Shawn Smith to provide an ordinance replicating the cruise ship limits approved by voters and take input from our committee on the details. And city attorney Smith said he would provide Commissioners with a draft in time for the Aug. 3 meeting.

“We immediately gathered our legal team for a detailed review and, on July 20, we furnished city attorney Smith with a proposed ordinance that would do what the voters have asked for. In addition, we supplied data that would enable the city to defend the ordinance in court if necessary; and provided an expert summary of Supreme Court precedents which demonstrate that the city is well within its authority to regulate cruise ships and unlikely to incur any liability. We have promptly answered all questions from city attorney Smith, have provided additional research and analysis of case law at his request, and have recommended a highly qualified candidate for outside counsel.

“At this time, city attorney Smith has not commented on our proposed ordinance, and to our knowledge has not provided commissioners with any draft ordinance in time for tonight’s city commission meeting.

“We understand that the city attorney’s role is to provide legal counsel to the commission, and we know that proper legal review takes time. But, given that the underlying legal issues have been clearly defined since last November, we are concerned by this delay.”

Nearly all city commissioners on July 12 emphasized their willingness to ban the majority of cruise ships from Key West by turning the three voter-approved cruise ship referendums into city ordinances. But those ordinances must be defensible in court against the anticipated lawsuit from the owners of Pier B cruise ship dock.

“We’ve got to do this right and that takes a lot of patience,” Commissioner Jimmy Weekley said that evening at the Aug. 3 city commission meeting, referring to the Safer Cleaner Ships Committee’s call for action and criticism of the delay in drafting the ordinances. “We need to bring an ordinance that’s defensible. Everyone needs to be patient. Our attorney will update us at each meeting.”

Smith, who has warned the commission of the potentially dire legal consequences of trying to regulate private property, told the commission he is in the process of hiring an outside, independent attorney or law firm to help draft, then defend, the ordinances.

“Specifically, I looked at the individual suggested by the Safer Cleaner Ships Committee, and the recommendation I got back was to not hire that person if you in fact want an independent person,” Smith said. “I don’t intend to hire someone that has an agenda in place, or an idea in place. As many of you have suggested to me, hire somebody that is independent and will review the facts and will issue an opinion to you.”

“We want to do this in the best interest of the entire city so it can withstand court scrutiny. There’s a lot of complexity with regard to the many different, potential claims that Pier B could bring. And I agree, we should have independent counsel that’s separate from the Safer Cleaner Ships committee. That independent counsel really should be disassociated from the committee because in the end, it’s the city that will have to defend our ordinances.”

The committee’s update, sent out on Tuesday, Aug. 3, before that night’s commission meeting,  also outlines a suggested legal strategy drafted by the committee’s legal advisers and provided to the city attorney, city manager and Mayor Teri Johnston. The committee’s lawyers suggest the city argue that cruise ship reductions are necessary to protect the citizens of Key West and its “fragile medical infrastructure” due to the potential of contagious infections aboard a cruise ship. The defense strategy does not mention the protection of coral reefs, water quality or other environmental resources.

“Municipalities including Key West are authorized under the 10th Amendment to the United States Constitution to regulate commercial activities within their jurisdiction, including cruise ship disembarkation. The principle is generally known as the ‘police powers’ of government. In short, a local government may take any actions deemed necessary to protect its citizens, including especially any actions to protect public health and welfare. For example, Key West regulates the hours during which alcohol may be sold and limits the volume of noise that may be created. Even though these regulations may burden businesses which would prefer to sell alcohol and create noise at all hours, the regulations serve a valid public interest. Thus, they are lawful exercises of the city’s police powers.”

In addition, the SCS legal team disputes Smith’s warnings about a breach of contract claim, writing:

“According to the Supreme Court, a local government like Key West simply cannot ‘bargain away the public health or the public morals’ through a mere contract with a private business. …

“Thus, the ordinance our committee has proposed to regulate cruise ship disembarkation evenly throughout the city and protect our fragile medical infrastructure is a lawful exercise of sovereign authority, notwithstanding a 27-year-old contract for Pier B.

“For the reasons discussed above, the conclusion of our legal advisers is that competent counsel for the city will find that it has favorable case law and ample evidence with which to mount a strong defense that will likely enable it to defeat any … claims advanced by Pier B or other parties in response to the ordinance we have proposed.”