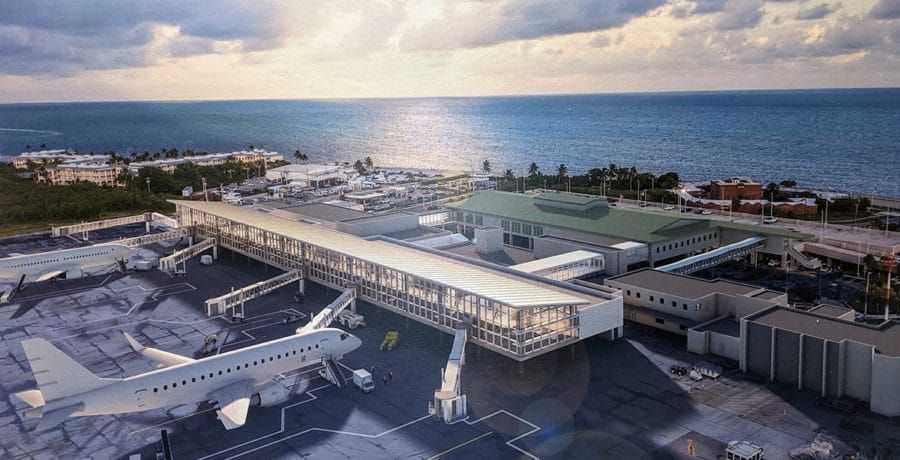 The skies have been less friendly than usual for air travelers nationwide and at Key West International Airport, where COVID-related staffing shortages have caused significant delays in recent months.

Monroe County commissioners and Key West city commissioners have been hearing complaints from travelers about fully loaded planes sitting on the tarmac and an overcrowded departure lounge.

At the July 21 county commission meeting, Strickland acknowledged the issues and explained their causes.

“I know several of you have received complaints from passengers who have had to wait on the aircraft and in the departure lounge,” Strickland said, attributing many of the delays to the COVID labor shortage, both locally and nationally.

And as for the packed departure area, or “hold room,” Strickland said, “that’s why we’re moving forward with the new Concourse A as quickly as possible.”

An $80 million airport expansion is planned over the next three years, with a targeted completion date in October 2024.

“The problem is industry-wide; it’s not company specific, and it’s across all airline disciplines, from ground crews to flight crews,” he said. “When that labor shortage hit, we were missing key employees of both the airport and the airlines. Employees literally couldn’t marshal an airplane into Key West because, by law, they needed five employees to do it, and oftentimes only had four. The complaints really ratched up in June.”

In addition, Strickland said, the air traffic controllers in Miami manage the airspace around South Florida and have the authority to order a “ground stop,” meaning a pilot cannot move a plane, even though it’s fully loaded and ready. The delays may have nothing to do with what’s happening in Key West, but can cause domino-like delays.

There should be a light at the end of the tunnel — or runway, Strickland said.

“When the [additional federal unemployment] checks ended in Florida on June 26, we’ve already seen 48 new employees hired in Key West,” Strickland told the county commissioners on July 21. “They’re going through training and the delays should be all but gone by the end of August, but it certainly is a challenge.”

The county commissioners thanked Strickland for the explanation.

“I thought it was important for us to hear this,” Rice said. “It falls under the category of nothing is as simple as it seems, and it’s clearly not just a Key West problem.”

As for the expansion project…

Strickland presented plans for the new concourse at a meeting on April 27. The project will include a new security checkpoint, new gates, a new “hold room” for departing passengers, new concessions, a new baggage claim area and glass-enclosed jet bridges, or jetways, to connect the planes with the building.

“There will be much more space to spread out. People won’t all be crunched together and on top of each other while waiting to depart or while waiting for their baggage,” Strickland said. “It’s the right amount of facility for the projected numbers of passengers we’re dealing with.”

He estimated the final price tag of the new concourse to be “south of $80 million,” but none of it will be from local taxpayers, Strickland said.

“That’s important,” Monroe County Mayor Michelle Coldiron told the Keys Weekly the morning after the meeting. “This project will be funded entirely with federal aviation grants and user fees paid by airline passengers.”

“I completely understand. We all don’t want things enclosed, and we like our small-town airport, but it really is a liability issue, having people walk outside and across the tarmac,” Coldiron said.

Concerns from the audience at the April 27 meeting centered on the impacts of the guest experience during construction, as well as general concerns about the constant increase of tourists and airplanes coming to Key West.

“How much is too much?” former city commissioner and Duval Street bar owner Mark Rossi asked during the meeting. “It’s a quality of life issue, Mr. Director, and I’m putting you on notice. I feel like I live at an airport with planes coming and going constantly. When is enough going to be enough? I’m not opposed to tourism, obviously, but come on.”

Strickland acknowledged that “phasing will be critical to minimize the impacts during construction,” and said that “air travel is considered interstate commerce, which is protected by federal law. So I can’t tell an airline, ‘No, you can’t fly in here.’”

Another attendee complained that planes never used to take off before 7 a.m., “but now I’m woken every morning at 6:08 a.m.”

Strickland said, “We don’t get to tell the airlines when they can come and go, but we can try to work with them. And we’re going to be holding noise meetings in the coming months to look at maps and noise impacts.”