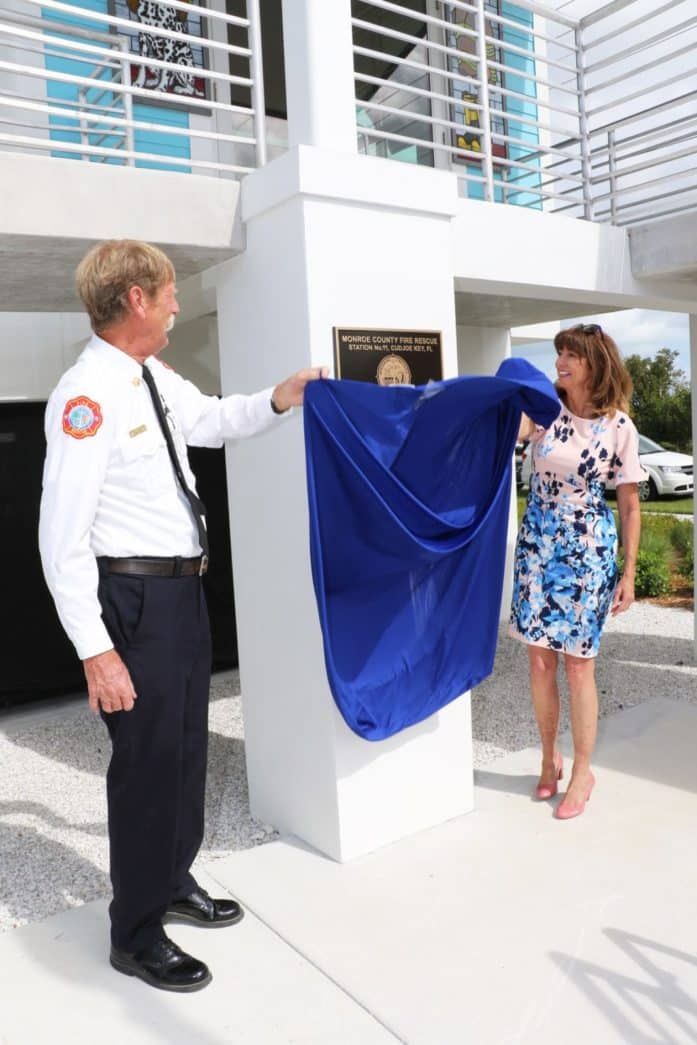 Wednesday’s BOCC meeting ground to a good-natured halt during an emotional presentation for the retirement of long-time Fire Rescue Chief James “Jim” Callahan. At the gathering, he received two plaques, many tributes and a tongue-in-cheek roast or two.

Callahan’s retirement and the appointment of his successor took place during the May 19 meeting of the Monroe County Board of County Commissioners. Callahan retired after 15 years with the county, and a video detailed his accomplishments: for example, after a devastating fire on Conch Key when he first started, he instituted a countywide hydrant installation program; following another large fire on Stock Island, he pushed for additional equipment and career-service firefighters to meet the community’s expectations; he also increased staffing levels to meet state minimum standards.

In addition, on May 17, he oversaw a ribbon-cutting ceremony to open the new Cudjoe Key Fire Station 11, a project that had long been on his to-do list to improve Monroe County’s infrastructure. The 3,708-square-foot building has a 4,299-square-foot garage bay and is rated for Category 5 hurricanes with 200-mph winds.

Incoming Fire Rescue Chief Steve Hudson presented Callahan with a fire ax on a plaque and thanked him for his service. “Thank you for bringing me here and developing me into the future and the next fire chief,” Hudson said.

Mayor Michelle Coldiron officially declared Callahan an honorary Conch, which he joked was his favorite part of the ceremony. “Thank you mayor, Commission, very very much. … I see many people here and needless to say, the most important person to thank is my wife for everything she’s helped me with,” he said. “My firefighters. The staff. There’s many of them here today, and I didn’t expect to see them. The fire department has been my life, and thank you all for being part of it and I’m starting to choke up a little bit. … God bless you all.”

Coldiron concluded the retirement ceremony by swearing in Hudson. “I’m ready to serve the community with the best service possible,” he said, with emotion. “No slight to our neighboring departments, but we’re up for the challenge.”

Later in the meeting, the BOCC also acknowledged that Charles Pattison, executive director of the Monroe County Land Authority, is retiring. The Land Authority, per its website, “acquires property for conservation, recreation, and affordable housing in Monroe County, Florida within the Florida Keys and Key West Areas of Critical State Concern.” Pattison had been in the position for five years.

“I thank Charles for the hard work you’ve provided over the years for the Land Authority,” said Coldiron, who also endorsed his replacement, effective in October: Assistant County Administrator Christine Hurley. Hurley has been with the county for 11 years and in her current position has been in charge of the departments of planning and environmental resources, building, code compliance, employee services, and information services.

Coldiron said, “We’ve been aggressively acquiring land for future takings cases. It makes sense for Christine Hurley to be spearheading (the Land Authority).”

“My passion with Monroe County has been deep,” said Hurley. “I see that our challenge at the Land Authority will be land acquisition to make our community more resilient.”

The May 19 BOCC meeting was the first one that Shannon Weiner ever attended in person as the county’s director of Emergency Management, due to the recent relaxation of social-distance restrictions. She also had good news: The end of an era is possibly at hand. “The 26th of June is our target for response operations to end, and that is in concert with the current state of emergency issued by the governor’s office,” she said. The county’s response to the pandemic, Weiner said, is in its 439th day for Monroe County. Fewer positive COVID-19 tests also added to her upbeat presentation: in May there have been seven new cases a day, while in April there were 14, and in March, 16. The all-time high, she said, was 37 positive tests a day in January. She also said 54% of residents have received at least one vaccine shot, up from 34% last month. “Everyone is doing a good job sticking shots in arms,” she said.

Monroe County Commissioner Eddie Martinez was released from the hospital on May 19, the day before the BOCC meeting on May 19, according to his wife CVCVCV Martinez.

“Eddie had a seizure and was just released from the hospital yesterday and is in no condition at the moment to attend a BOCC meeting,” she told the Keys Weekly. “He will be back in normal operation by next week according to his doctors at Baptist. It is apparently due to the seven or eight surgeries he has had consistently since February of 2020.”

His wife said Eddie is the “type of person that has gone to a BOCC meeting with 60 staples on his abdomen. Just give him a week.”

He was elected in 2020, having defeated defendant Heather Carruthers. She then filed a lawsuit challenging his residency in the district he represents; that suit is still pending.