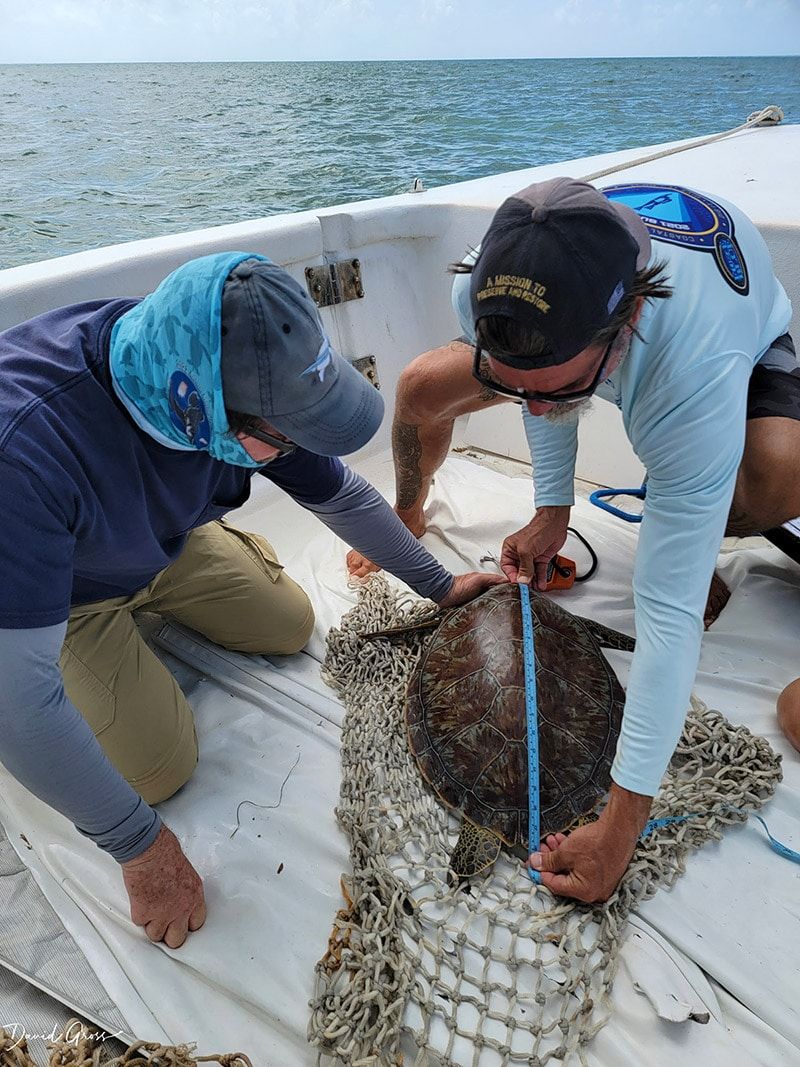 The Turtle Hospital in Marathon has been treating sea turtles found near our shores with internal and external tumors for over 35 years. Now, for the first time, they’re collaborating with the veterans of Force Blue to organize a scientific study to understand why.

“The Force Blue project is near and dear to my heart, as it is the first scientific research project I organized,” said Turtle Hospital manager Bette Zirkelbach. “At the Turtle Hospital, we collaborate on many scientific projects, but this one is in our backyard, looking at the health of the Florida Keys green sea turtle population.”

So, what exactly is going on with the sea turtles?

Our beloved marine reptiles are suffering from an array of threats, Zirkelbach said. Everything from environmental degradation, infectious diseases and biotoxins to chemical contaminants is affecting their health and survival.

Something in the water is likely causing many of these turtles to develop a condition called fibropapillomatosis (FP), where internal and external tumors grow and can impede swimming ability, digestion, breathing, eyesight and more. The disease is a “transmissible tumor disease of ecological importance” in green sea turtles (Chelonia mydas) in the Keys, Zirkelbach added.

The problem is common and home-grown, it seems, with FP tumors recorded in 51.6% of stranded green turtles in the Keys. In contrast, the tumor frequency rate for Florida overall is less than half: 22.6%.

“The waters surrounding the Florida Keys are of particular concern” because they are an exemplary foraging ground for juvenile green sea turtles, Zirkelbach told the Keys Weekly. “Understanding the habitats of green turtles with this alarming FP rate is a crucial step toward elucidating factors that may contribute to the disease.”

She hopes to fill in those critical information gaps by capturing and studying what types of tumors and environmental conditions exist in Keys’ sea turtles. In particular, she wants to study the movement, foraging ecology, and health of the aggregation of green turtles inhabiting waters of the Great White Heron National Wildlife Refuge in the southern Florida Keys.

To do so, the Turtle Hospital collaborated with the veterans of Force Blue.

“This is a dream team. One team, one fight for the health of our oceans,” Zirkelbach said. “The Florida Keys Sea Turtle Health Study was my dream research project for the Turtle Hospital that Force Blue helped to bring to reality. I have been networking with scientists and preparing for this project since the first time I saw FP tumors on sea turtles coming out of Florida Keys waters.”

Force Blue’s mission is to unite Special Operations veterans with the world of marine conservation. The organization retrains and redeploys former special operations veterans and military-trained combat divers to work alongside scientists and environmentalists on marine conservation missions, executive director Jim Ritterhoff previously told the Weekly. Locally, the group has done a ton of work, helping with everything from reattaching 100-year-old coral heads after Hurricane Irma to helping to plant endangered corals ahead of Super Bowl LV.

For this mission, the Force Blue team trained on how to safely capture and release sea turtles on the water. The group also funded the study. Zirkelbach called their involvement “another amazing layer” to the project, because of the “mission-based therapy” that the in-water work provides to the retired warriors and military divers. They receive “a new mission and a sense of continued service” in fighting for the planet, Ritterhoff said.

Over 10 water days, the team, along with Florida Atlantic University researcher Annie Page-Karjian and InWater Research Group, both of whom have years of research on FP in sea turtles and sea turtles in Florida, respectively, collected, tagged and released a total of 38 green sea turtles. All work was conducted pursuant to NMFS ESA Permit No. 21169 and FWC MTP 204.

Now, blood and tissue samples are being processed and evaluated in laboratories across the country. Everything from turtle diet to disease prevalence to biotoxins present will be analyzed to try to understand what is going on.

“It will take time to process the samples,” Zirkelbach said.

Still, already, she was shocked to learn that some FP tumors on larger juvenile turtles appeared to naturally be in remission. “We have so much to learn!” she added.

Zirkelbach concluded by imploring us all to pay attention to the messages that the sea turtles are sending. As species that were swimming around in our oceans along with dinosaurs, they serve as “indicator species” ? what’s happening to sea turtles will eventually affect all life.

“Because sea turtles are sentinels of the marine ecosystem health, further research is needed on the green turtles that inhabit the lower Florida Keys to determine how the habitat is being utilized, and whether forage availability and quality and/or water quality are impacting sea turtle health and behavior, and the health of the ecosystem they inhabit,” she said.

Zirkelbach hopes that data collected from projects like this will help policy makers better manage marine ecosystems, for the health of all.