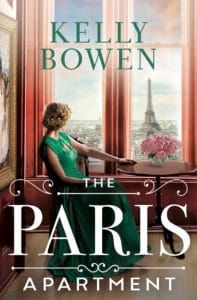 If you find yourself daydreaming about the city of lights, pick up one of these fabuleux novels to take you away for the day. Armchair traveling at its best with historical fiction, mystery, romance and always a bit of bubbly — you don’t need to speak French to enjoy the language of love. The Paris Apartment
By Kelly Bowen

When Aurelia Leclaire walks through the door of a lavish apartment she recently inherited, she is both shocked and astounded. Her grandmother not only left Lia an apartment that no one knew of — but it has also been deserted since 1943. The apartment is overflowing with magnificent couture, jewelry and priceless art. One particular landscape leads her to contact Gabriel Seymour in London, a well known art restorer and appraiser. Quickly arriving in Paris, Gabriel is shockingly handsome and much younger than Lia expected, the two share instant chemistry. Some clues suggest the unimaginable — that grandmother was a Nazi sympathizer — but after digging deeper they discover her long buried secrets and as fate would have it, the mystery draws them to Gabriel’s own family in England. Narrated by the brave women of the past and Lia’s unwavering determination to put the pieces together, we travel through war torn Europe and modern day Paris. Filled with history, art and a budding romance between delightful characters, “The Paris Apartment” is absolutely magnifique. Paris Is Always A Good Idea
By Jean McKinlay

Chelsea Martin is a successful fundraiser at the American Cancer Coalition in Boston. Following her mother’s death seven years earlier, Chelsea threw herself into work and quickly rose to the top. Intelligent, organized and an admitted workaholic, there was little room in Chelsea’s life for anything trivial — like friends, romance, fun or flirting. After an unexpected marriage announcement from her traditional mathematician father, Chelsea becomes desperate to rediscover her old self. It is hard to believe she was once the adventurous young person traveling through Europe enjoying a gap year and falling madly in love, not once, but three times! Chelsea realizes that she is ready to open her rigid schedule and her heart to find the ones that got away. Searching for past loves — Colin in Ireland, Jean Claude in Paris and Marcelino in Italy  — proves to be more complicated than she could have imagined. If you have ever wondered where that girl has gone, you too will fall in love with this adorable and heartwarming romantic comedy. The Light of Paris
By Eleanor Brown

Madeleine is in a sad unfulfilling marriage. Her handsome, successful husband had everything on paper that her mother always dreamed of  — and Madeleine finally succumbed to the pressure that marriage would be the key to life’s happiness. Over the years her controlling husband became increasingly demanding and Madeleine found her own stifled dreams had long since faded. What was meant to be a weekend assisting her mother with some packing became an extended stay and unexpected escape to the small town where she was raised. After discovering her grandmother’s diary and reading about her extraordinary adventures in Paris, Madeleine creates her own affair. Finding the confidence to dig deeper, Madeleine rediscovers the art she once loved, opens herself to friends and the many possibilities landing at her feet. Narrated between the past and the present, this delicious story delivers hope of finding one’s true self. Captivating writing and dreamy settings are your ticket to a wonderful getaway, no passport required.

TIP: Experience the beauty from your very own couch and check out the Emily in Paris series, an amazing Netflix dramedy!