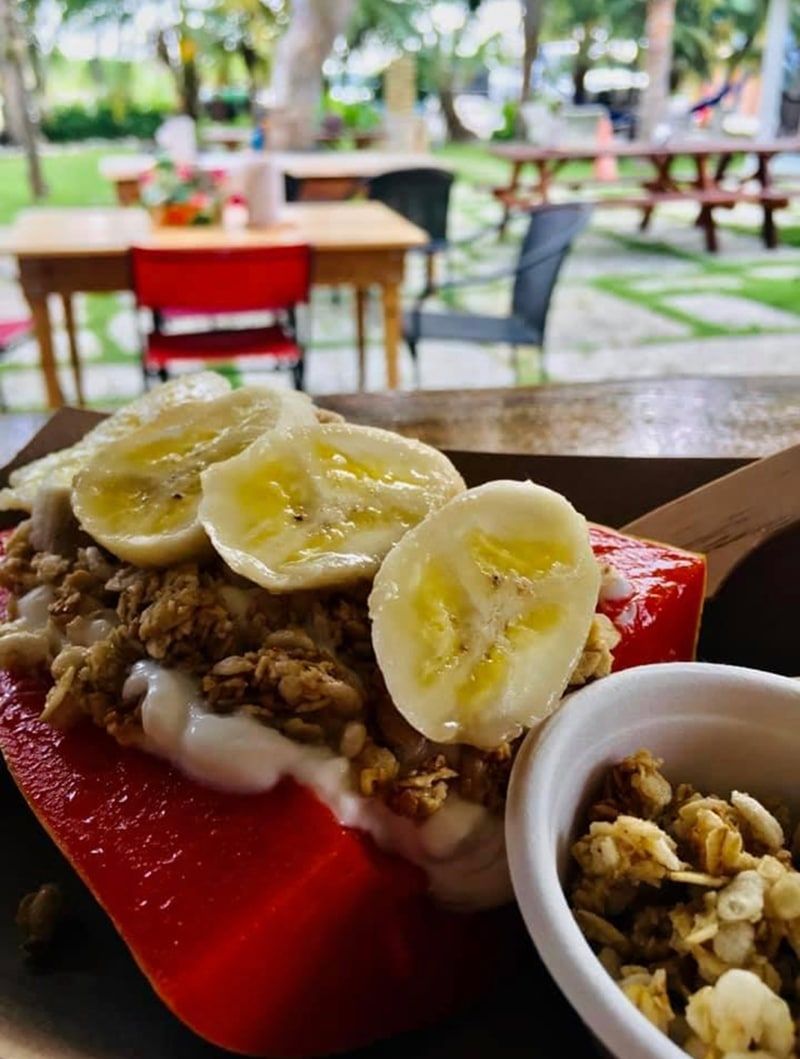 Picture this: a shady oasis of palm trees and tropical natives sheltering a grass-and-coral slab dining area interspersed with mismatched tables, swing chairs and little shade structures. Dead ahead is a bar backed with 20 taps (mostly craft beer, but also some wine and other fun stuff) on a colorful mural wall. At a right angle is the kitchen and a little stage with a sand dance floor.

This is Bongos at The Lagoon on Grassy Key. The restaurant and bar “nails” island vibe in a way that’s unmatched in the Florida Keys.

“I love Bongos and I love all the good things I’ve heard from the community,” said owner Matt Sexton, who oversees not only The Lagoon and its many attractions (more on that later), but also the Grassy Flats Resort and Beach Club just down the road. “It’s been something I wanted to do for such a long time. And it’s another reason for people to come out to the watersports park. Food and libations is probably something universal we can all agree on.”

Chef Andy Niedenthal signed on about a month ago.

“It’s not a hoity-toity place. It’s like going to your friend’s house to have a party. If you’re thirsty, you get up and get something to drink. If you’re hungry, you get up and get something to eat,” he said. The atmosphere is casual, but the quality is not: the dishes and craft cocktails often incorporate food and herbs grown on the property, from figs to dill, among other fabulous details.

The menu is short and sweet and oh, so good. On a recent day, Niedenthal served up a “Betty Crocker” bento box — a muffin tin filled with three types of salsa and three types of chips; a trio of fresh shrimp tacos smothered in fresh mango salsa; and a sinfully good grilled cheese sandwich that has more in common with a cup of French onion soup.

“We have some off-the-wall items, and some that are normal and straightforward. Like islanders tell new transplants, it’s not right and it’s not wrong, it’s just different,” Niedenthal said.

“Chef Andy is very inventive and unflappable,” said general manager Karen Thurman. “I think that comes from working in the islands; it gives us an edge. The day the bridge goes out, well, we can still pull off a party for 100.”

That, and plenty of experience, too. He’s worn the executive chef toque at places like Pierre’s at Morada Bay, Cheeca Lodge and Spa, the Green Turtle Inn, and the Islander Resort in Islamorada; the Marshall House in Georgia; and Scrub Island Resort in the British Virgin Islands. Niedenthal’s love for food began in Baltimore, where he helped his parents prepare Maryland crab feasts. As a teenager, he bussed tables at a Greek restaurant and later earned a degree from Baltimore’s International Culinary Institute.  Since then, he’s cooked in the British Virgin Islands, Deep South and Puerto Rico. He has multiple TV appearances and a loyal following.

From a slow build, Bongos is now open seven days a week. Locals are raving about the brunch. Again, choose from something straightforward (and healthy) like a papaya boat filled with bananas, Greek yogurt and sprinkled with honey granola. (The papaya and bananas are grown on property, of course.) Or go wild, with a Pappy Van Waffle breakfast. It’s a Kentucky-fried quail served on a buckwheat waffle drizzled with hot-buttered, Buffalo Trace bourbon syrup. Oh. My. Goodness.

“When I’m not doing slave labor around the property, I love a good brunch,” said Sexton. “I day drink a couple of mimosas and have a low-cal breakfast. It’s perfect.”

The attention to detail is incredible — from the “robot dinosaur” pots with succulents on the table to the trash cans where customers sort their trash to reduce environmental footprint. Bongos features live music on weekends, two acts a night, from early afternoon until about 11 p.m. It’s not uncommon for kids to race between the bandstand and the giant Jenga game, their attention torn between two great options. Later in the evening, the crowd is adult but the age range is vast — from 20-somethings to great-grandparents.

Bongos has some picnic areas that are dotted on the lagoon’s shoreline, complete with shade and tables. Those are available for rent for private parties.

There are so many things happening at The Lagoon on Grassy Key: wakeboarding, a saw mill, a garden, a gear shop, great public art.

Bongos is located at The Lagoon on Grassy Key, MM 59 on Overseas Highway, just northeast of Marathon.