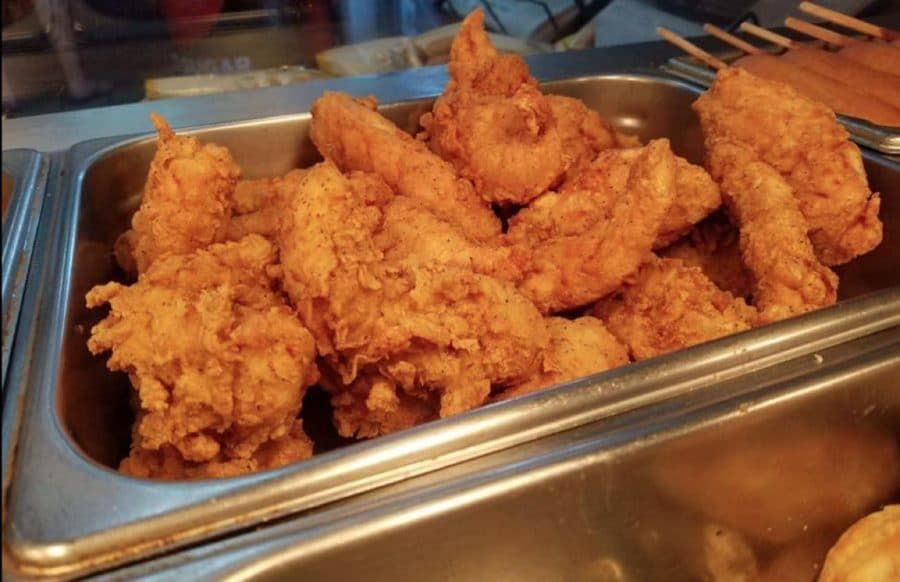 BEST GRUB TO BRING ON THE BOAT – ONBOARD MAGAZINE

DO NOT BRING BANANAS ON A BOAT. That’s the most important lesson we learned when it comes to what people bring and don’t bring onboard. But more on that later.

Keys Weekly posted a simple question to the community: What do Keys peeps eat on their boats during a day on the water? And y’all were opinionated. Sixty people responded about their favorite nibbles to nosh on.

The winners by a landslide? Dion’s Quik Chik fried chicken and Pubs Subs (Publix sandwiches, for the uninitiated). Obviously, foods eaten with utensils are a pain onboard, especially since many boats don’t even have a table. So finger foods win the day.

Boaters love to order up a Publix sandwich ring from the deli ahead of time, swing by to pick it up, then hit the boat. And as for fried chicken, many of you like the convenience of eating a chicken leg, then just tossing the bone overboard, leaving less garbage to bring home.

And the love that was shown for Dion’s was witnessed. One Keys boater even said, “Yep, no trip can be the best day ever without Dion’s. Why take a chance. If they are out, the wait is worth it even more.”

Next most craved items? Sandwiches made yourself, peel-and-eat shrimp, watermelon (dipped in saltwater) and lots of fruit in general, cheese and crackers (another Keys boater said, “We always have sharp cheddar, double-layer sardines and Ritz crackers!! It’s a daddy tradition!!!” ), hummus and chips, PB&J, Pringles (“must be BBQ” one person said), Fritos, Twizzlers…

A couple others had a great tip for quickly making sandwiches yourself, while also preventing the dreaded soggy-food-in-the-cooler problem.

Katie Westphal said, “We make what we call ‘boat sandwiches.’ King’s Hawaiian rolls sliced in half and filled with any type of lunch meat and cheese. Our favorites are Italian style and Philly cheesesteak. We usually pair that with Publix cookies and variety chips and, of course, White Claws.”

Westphal said that she puts the sandwiches back in the original plastic packaging to avoid sogginess from the iced cooler.

For all the finger-food love, one person had an unforgettable warning to keep in mind: “Please wash your hands first! It was many years ago that I cut squid on the hot deck right before lunch. I’ll never forget that night and most of the next day. No more finger foods on our boat.”

Some impressed us with their culinary skills. Bob Maykut throws together prosciutto and mozzarella with arugula and sun-dried tomatoes in olive oil on ciabatta bread, all drizzled with balsamic vinegar. Tara Maria makes artfully composed pressed tuna sandwiches (she attached a photo to show us) so beautiful that we almost hate to eat them.

John Seckinger told us he makes sashimi or ceviche with just-caught fish while on board. “Sashimi sauce, clean knife, clean cutting board and… Wassabi! Another option: Make ceviche in a Tupperware (without the fish), put on ice. All you need to do is add freshly caught chopped fish! Eat like a king!!!!”

Let’s not forget the booze: good ol’ wine and beer. Premade margaritas. White Claws. And a couple of commenters had easy-peasy cocktail recipes that we’d be remiss if we didn’t mention them.

And, oh yeah…back to that banana thing. DO NOT BRING BANANAS ON A BOAT.

Several commenters wrote to sincerely advise readers not to bring the fruit onboard for risk of getting kicked off by an angry crew. We heard that one feisty captain wouldn’t let his wife on their boat with a just-eaten banana in her stomach.

Why? Bad luck. One writer cut-and-pasted this info from Montereyboats.com: “Dangerous cargo. The banana superstition dates all the way back to the 1700s, when many lost or ill-fated ships were noted to have been carrying bananas to their destination. It is perhaps because of this occurrence that bananas became known as omens of danger and misfortune for ships.”

Our commenters didn’t have much to say about sweet treats or desserts. But Keys Weekly’s own Sara Matthis has had one longtime standby: Frozen Snickers. “You put it in the cooler, and by the time you get to eat it, it’s just perfect. Something about a frozen Snickers and the salty air,” she said with a sigh…presumably daydreaming about her next day on the water.

The post BEST GRUB TO BRING ON THE BOAT – ONBOARD MAGAZINE appeared first on Florida Keys Weekly Newspapers.