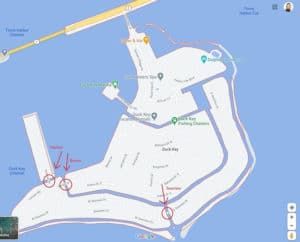 There’s a popular meme (internet joke) with a man holding up a finger to his forehead, a knowing Mona Lisa smile on his face. It reads, “Modern problems require modern solutions.”

That’s a big obstacle for homeowners and contractors who seek to buy, sell, renovate or build.

LPS Utilities loaded three full-size moving trucks, one at a time, on its barge on March 23 to move the Williamson family.

“We were so happy with the barge,” said homeowner Teresa Williamson. “We thought we were going to have to offload the moving trucks onto flatbed trailers to cross the bridges — that would have taken a week or more.

“Instead, they had us moved in one day,” she said.

Trent Myer of LPS Utilities, a marine construction company, said the company purchased the barge two months ago, specifically for this use.

“We already have other barges that we use for our main work, but we added one more to the fleet,” Myer said. “It’s been really nice to serve the island where we all live.”

Myer lives on Duck Key and is prevented from driving his work truck, weighing 8,000 pounds, and parking in the driveway in front of his home.

“I thought, ‘This is going to be a problem.’ I knew if we bought another barge we would be able to help a lot of people until the bridges are fixed and still have use for it when this is all over. It’s all gain and no loss,” Myer said.

The barge is loaded at a boat ramp on Grassy Key, near the former JoJo’s property. The trucks drive onto the barge and then are pushed across the bay by a custom made flat-bottom boat.

The cost for renting the barge is determined on a case-by-case basis, but already the schedule is filling up and the barge is booked for the next three weeks — in one case, to haul a cement truck with materials for a new swimming pool.

The temporary traffic signal at Schooner Drive is being removed. All remaining traffic signals are being reprogrammed to accommodate the removal of this signal and allow for quicker access across the Bimini Bridge. The road has been temporarily closed in this area as a result of safety concerns.  All traffic is to follow the detours onto Corsair Drive and use the traffic signal there to cross the bridge.

More information about the barge is available at 305-240-9882 or email moc.gnitcartnoc-spl@ofni. Updates on the bridges projects are at www.monroecounty-fl.gov/duckkey.