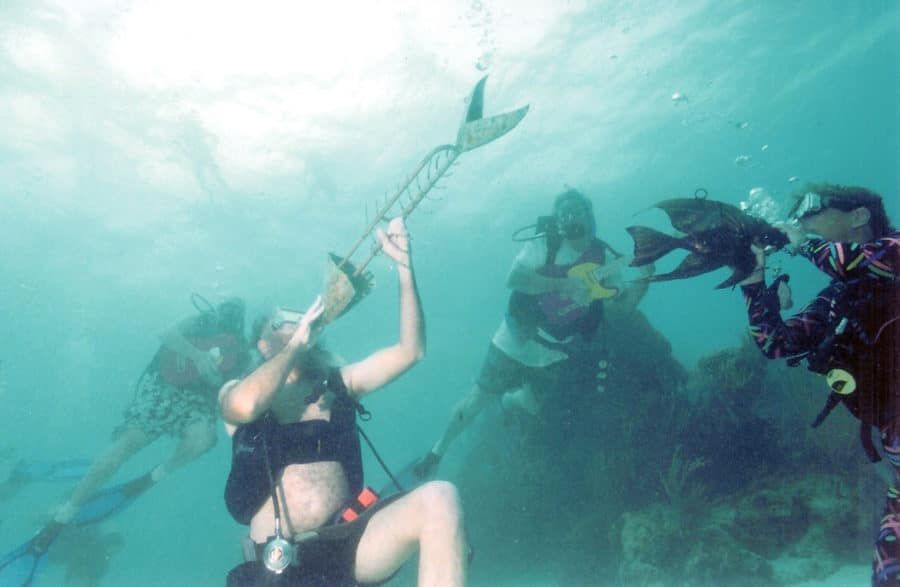 It’s funny, the turns a life can make because of a simple gift. Keys resident August Powers had been making a living for years in food service for the Seacamp on Big Pine Key and as a sailing instructor, among other things. But he always liked working with his hands. So in 1990 for a birthday gift, his mother gave him a welding art course at the Florida Keys Community College.

“And she said, ‘I want a fountain,’” Powers told Keys Weekly.

In the course, he used oxy-acetylene welding on copper with silver braze. He made his mother a fountain, and loved doing it.

“And it just took off from there,” he said. “Copper just worked. I tried steel, but it never worked. Copper will last forever, but steel will rust and be gone.”

When he started working with copper after the course, the hobby was a part-time pursuit. He made fountain after fountain, each with different creatures and plants on it: stems, leaves, snails, frogs and lizards. Finally, Powers displayed his fountains in Big Pine Key’s Artists in Paradise gallery. He observed the artwork within the gallery.

“I looked around and saw all the fish, including a barracuda,” he recalled. “So I made a couple of barracuda sculptures. The gallery had a show and they both sold.”

In 1995, the Wild Side Gallery in Key West asked Powers if he’d like to join their gallery.

“It was a match made in heaven. The more I made, the more they wanted it. And it went on like this for 25 years.”

And so, the self-taught artist was able to leave the food industry and make a living selling his sculptures. “And I can’t draw,” he said, half-jokingly.

Powers gravitates toward making sea creatures because of his lifelong love for the ocean. He starts a sculpture with a sheet of copper that he buys from a roofing company in bulk. He begins with an idea for a marine animal — sometimes he’ll wake up in the middle of the night with a vision for the next copper fish he’ll create — then he cuts out forms in the copper with heavy duty scissors called aviation snips.

Next, depending on what kind of creature it is, he’ll add electrical wire or copper tubing bought from Ace Hardware and braze the materials together with a torch.

“You have to look at the flat piece of copper and figure out with the brute force of your hands how to make it become a living thing,” he said, explaining his artistic process. He will sometimes create a new welding process to, say, turn a soft coral sculpture red.

And all sculptures are one-offs, made completely by hand. No short-cuts with expensive plasma cutters to bulk cut the copper.

For example, in order to turn some of his sculptures green, he experimented until he came up with a solution of household ammonia and pool acid that turns copper the perfect color of antique green.

In 2003, Powers started volunteering to make the whimsical copper sea-life instruments that are used for the Underwater Musical Festival. He made new instruments for the event through 2019.

“I liked that I donated my supplies, time and effort to an event that promotes reef awareness,” he said.

And he hasn’t lost any inspiration yet for creating his art. “I always go, ‘The next one is the best one.’”

August Powers is represented by Shady Palm Art Gallery in Marathon and has a limited number of works at Key West Art Center and Artists in Paradise Gallery on Big Pine.