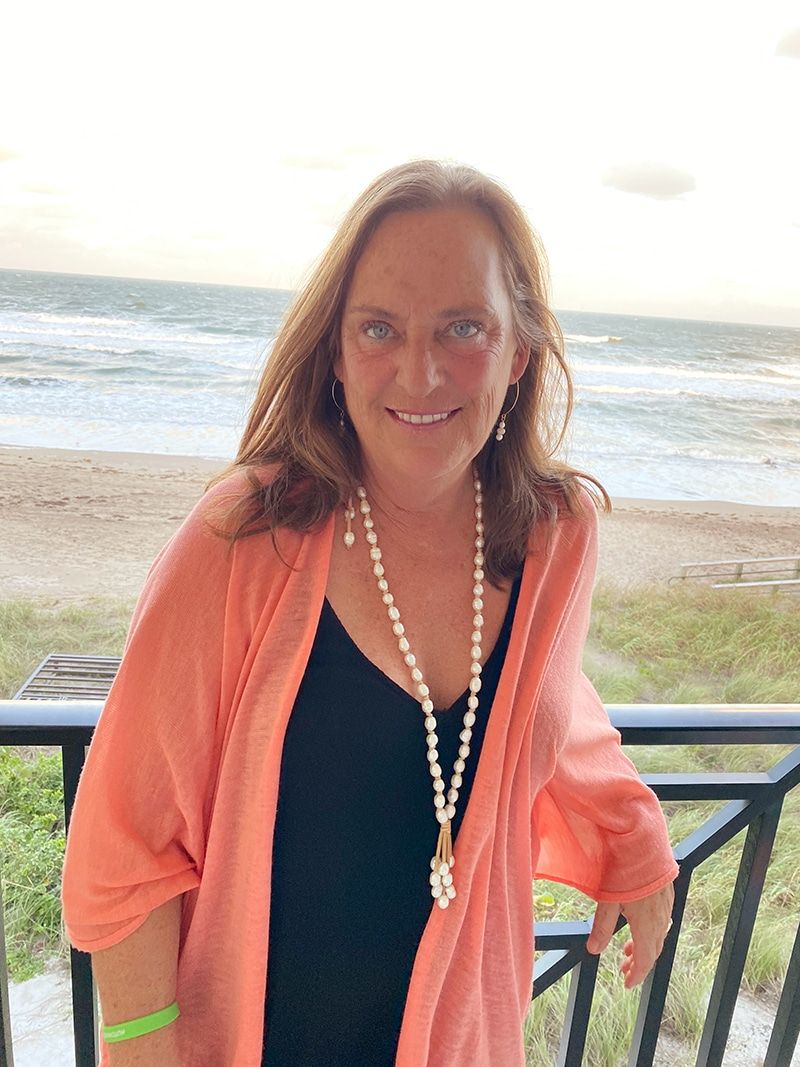 Susi Trottnow says that she divides her life into two parts. And the dividing moment happened 10 years ago, when she and her husband, Rich Trottnow, took a stroll in Islamorada’s Morada Way Arts & Cultural District shortly after moving to the Keys from Lake Tahoe. They passed an open warehouse called Morada Way Clay and went inside. They met the owner, and she asked Susi, “Have you ever played with clay?”

“I responded, ‘No, I’ve never done any kind of art,’ Susi told Keys Weekly. “And that’s what started the entire venture. I knew saying ‘yes’ to working in clay was the right answer. Fate was guiding me in the right direction.”

And by “right direction,” she means a new life. Trottnow has transformed from being a wedding coordinator in California to being Susi Trottnow Tropical Artist, as well as a muralist and DoTERRA essential oils distributor and producer of her own organic hand purifier spray… and whatever else may come her way. The sky is the limit.

Her husband, Rich Trottnow, has a different take. He told Keys Weekly, “We now live in the place we escaped to in the depths of cancer, mentally, when cancer tried to overtake us.”

Trottnow is also a breast cancer survivor. She was diagnosed in November of 2010.

“But the cancer is something that happened to me,” she said firmly. “It’s not who I am.”

And yet, the illness was the spark behind the couple’s move across the country. During her period of chemo treatments in the winter of 2010 to 2011, 50 feet of snow blanketed Lake Tahoe.

“That was a long cold winter,” she said.

So in difficult moments, she and Rich would envision a place of warmth, with sand, palm trees and water. But then the couple did what many people don’t: They decided to move while Susi healed after her chemo and radiation treatments. They picked the Florida Keys due to a connection to a friend.

Their big move took a year to come to fruition while they sold their condo and car. Once in Islamorada, Rich eventually became a realtor with RealtyOneGroup Engage the Keys. And Susi dove into the art scene.

She did start playing with clay, and she enjoyed it so much that she became a Morada Way Clay studio renter. She was taken aback when some of the first dishes she displayed got sold. Along the way, she also became a coordinator for the monthly Art Walk.

Susi continued to evolve artistically, and she moved from making ceramic magnets to sculpting renditions of coral reef to creating painted porcelain and silver jewelry. She also loves sea glass, and she designed a technique using it to make art called KeySeaArt. She now teaches this technique.

After a while, Susi became a studio renter at Our Place in Paradise in Tavernier, and now she also displays in its gallery.

All this, despite never having studied art or even tried it as a hobby before moving to the Keys.

Rich’s owner/broker at RealtyOneGroup, Judy Rossignol, took notice of Susi’s talent and asked her to create a mural on the side of her building, which is in Morada Way Arts & Cultural District. Susi was doubtful she could pull off a mural, especially since she was used to working in miniature.

But she cast away her fears, bought some dollar store chalk and sketched out the design on the wall. Rossignol’s only two requests were to use her brand’s three colors — black, gold and white — and to fill up the side of the building. So Susi did what she was told, packing the mural with a mix of coral reef, fish and jelly fish. For a whimsical touch, Susi added a curvaceous mermaid posterior in the corner of the painting.

“I knew she had it in her, though I pushed her a little bit,” Rossignol said with a smile. “Once she got it, she amazed me.”

Susi’s next collaboration with RealtyOneGroup is a “Secret Garden,” where in the fall the business will be providing an enclosed plant-filled space with chairs where the public can relax, use the bathroom and look at Susi’s art displays. She will also hold classes in the garden.

If someone had told Susi that she would one day no longer be a wedding coordinator in Lake Tahoe and that she would be a breast cancer survivor making her living as an artist in the Florida Keys, she would not have believed it.

“I would have said, ‘I think you’re mistaken,’” she said. “I couldn’t have comprehended it.”

But it’s not just the cancer journey that she is surprised at — it’s all the friendships she has made and all the creative opportunities she has received, which she calls “a beautiful explosion.”