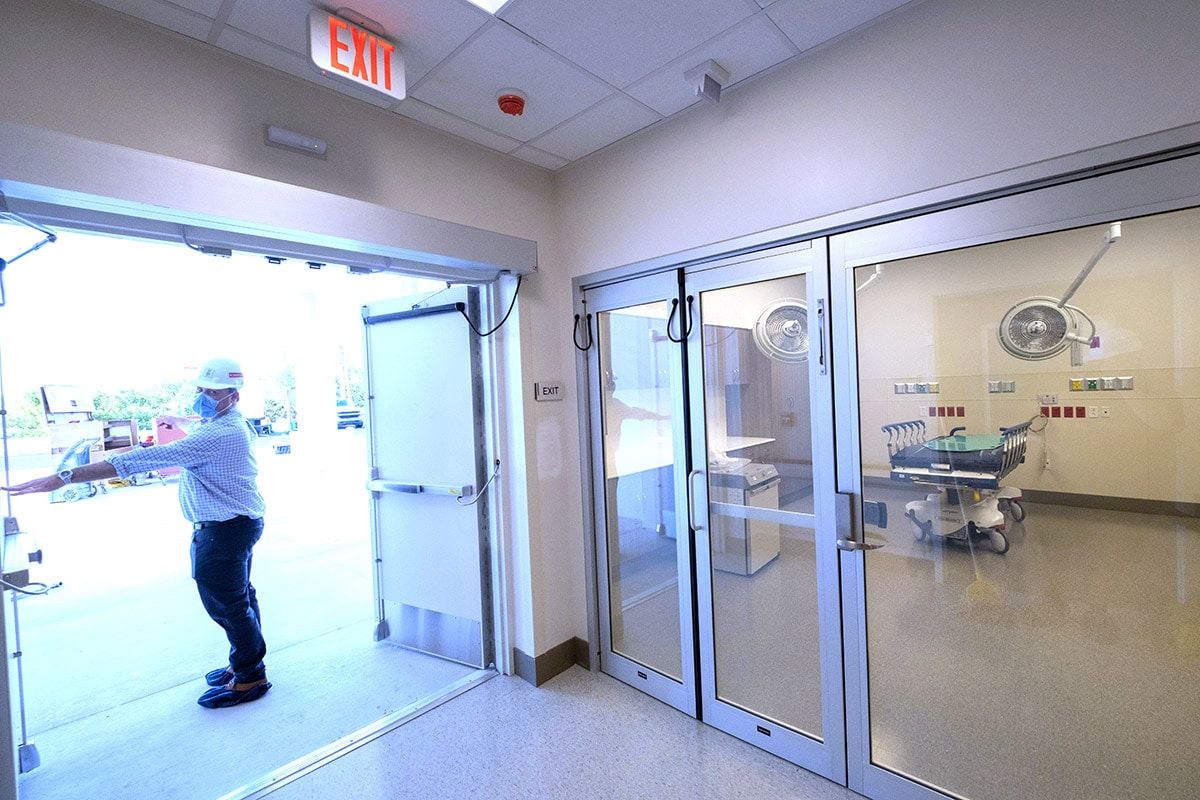 An anchor for the heart of the Keys

On Monday, June 7, the brand new Fishermen’s Community Hospital will open to the public. The 37,000-square-foot, $43.7 million facility is nearing completion and the Keys Weekly recently received an exclusive, first look. “I am unbelievably grateful to the Marathon community for supporting the hospital and raising the funds needed to get this hospital built,” said Jay Hershoff. Hershoff is chairman of the Fishermen’s Community Hospital and Mariners Hospital boards and vice chairman of Baptist Health South Florida, the parent company.

Drew Grossman, who was hired in February to replace outgoing CEO Rick Freeburg, is the leader of both Fishermen’s Community Hospital and Mariners Hospital. Grossman said the construction of the new hospital is a momentous event. “Baptist Health South Florida is proud to have built perhaps the only new critical access, or rural hospital, in the entire United States during the past decade,” he said.

The hospital is entirely new. And as the restored anchor — a Spanish colonial artifact — that used to sit at the front door is re-installed, it will be the only relic of the past facility, which was damaged beyond repair by Hurricane Irma in 2017.

When the construction fencing comes down, residents will get a sense of the new hospital. Although the new facility is half the size of the former hospital (about 76,000 square feet), it has a commanding presence.

If viewed from Overseas Highway, facing south, to the right is the main registration area. To the left is the emergency room, accessible for pedestrians in the front and a driveway for ambulances in the rear, next to the helipad. The emergency department has nine patient rooms, including one set aside for trauma cases. All the diagnostics equipment — CT scanners, x-rays, etc. — are located next to the ER department.

“I’ve worked in lots of hospitals, and this is so efficient,” said Grossman of the side-by-side arrangement. “When someone is in the ER, time is of the essence.”

Fishermen’s Community Hospital also has three chemotherapy infusion rooms. This is a first for the Middle Keys.

“Hospital staff will be able to administer chemotherapy and other immunotherapies so people with cancer don’t have to drive to Baptist on the mainland or Mariners or, in some cases, Key West,” said Mike Leonard. Leonard is the chairman of the Fishermen’s Baptist Foundation Council (a philanthropic entity), trustee of the Baptist Health South Florida Foundation and a board member of Fishermen’s Community Hospital.  “The ability to receive chemotherapy treatments is right here in our backyard. I think this is one of the best parts of the new hospital.”

In the center of the building is a huge operating room with special lights producing pure white light to enable the medical staff to see. Fishermen’s Hospital will be able to accommodate patients needing orthopedic surgeries, upper and lower gastrointestinal surgeries and general surgeries like appendectomies and cholecystectomies (gallbladder). There are five pre- and post-op “bays” where patients are prepared for surgery and recover afterward.

When open, the hospital will have about 100 employees. Fishermen’s Hospital’s department managers and directors also work for Mariners Hospital in Tavernier, which has about 450 employees.

“I think we still have about 20 positions to fill,” said Grossman. “It’s good progress. About two weeks ago we had 40 positions open.”

On the far west side of the hospital is where the regular hospital rooms are located. There are seven in all, including two intensive care beds located across from the nursing station. The rooms are big — about 256 square feet — and designed for a single patient.

The patients in those hospital rooms will have a view of the medical arts building, two or three years from now, when it is constructed on the site of the former library. (Baptist Health acquired the land in a land swap with Monroe County, trading part of a medical building it owns down the street.)

“We’re extremely excited to begin working on the medical arts building soon,” said Hershoff. “I think we will be able to begin in June as soon as the deed formally changes hands.”

Leonard said the day he was asked to lead the campaign to raise private donations for the construction of Fishermen’s was the luckiest day in his life. “There was no way I could say ‘no.’ And it was the smartest thing I’ve ever done in my life. I had the opportunity to pay back for everything good Baptist has done for my grandchildren and family and give back to the community I love.”

BY THE NUMBERS
25: Days until Fishermen’s Community Hospital opens
26: Days until the temporary hospital will start being dismantled
37,000: Square footage of the facility
$43.7 million: Cost of the hospital
7: In-patient beds
9: Emergency room beds

COOL FACTS
• When the back door to the emergency room opens, an air curtain engages to keep the bugs out of the sterile medical space.
• Many of the interior doors are fitted with “wave to open” sensors.
• Fishermen’s Community Hospital has a small chapel.
• Baptist Health makes the hospital cafeteria accessible to the public for inexpensive and nutritious meals.

The post An anchor for the heart of the Keys appeared first on Florida Keys Weekly Newspapers.