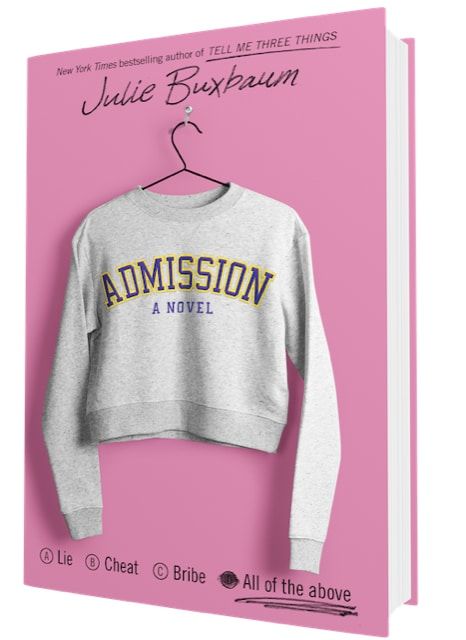 ADMISSIONS SCANDAL: BACK TO SCHOOL BOOKS WITH A TWIST

Chloe Berringer is a senior at the most prestigious (and expensive) private high school in Los Angeles. The SAT pressure is in full force and her beautiful, celebrity mother and handsome, successful father are cast as the helicopter parents from hell. Chloe’s grades are mediocre at best and her mom hires “the” college consultant to get the job done. Chloe is more focused on her longtime crush and spending weekends with her best friend but figures that whatever makes her parents happy and gets them off her back is fine by her. The morning the FBI comes banging on the door is the day her life turns upside down. The high-priced college assistance turns into the debacle of the decade. Chole’s mother is facing federal charges along with a slew of other rich, entitled parents who claim they were naively trying to help their beloved children. Not only has Chloe lost everything she loves, she faces the reality that her parents did not believe she could succeed on her own. They risked her future and her sister’s to ensure their own bragging rights. Loosely based on the recent news that rocked the nation, this YA fictionalized account was impossible to put down.

Four families in the fictional town of Crystal, Colorado find themselves fighting for a few precious spots in the new “gifted school” being developed in their neighborhood. Part of a small community, they have been close friends for years. As their children get older it becomes more difficult to evade the constant rivalry thrust into their lives — from travel soccer (best in state) to IQ tests required for acceptance into this prestigious program. The competition to read younger, speak multiple foreign languages and perform both on and off the field increases with each passing year, as do the buried secrets and escalating lies to get ahead. Through painful divorce, untimely death and the financial strains of keeping up with the Joneses, these friends desperately struggle to keep their once close and treasured relationships intact. Written with uncanny humor, this fictionalized reality is filled with our nation’s absurd race to nowhere and the reminder that it is vitally important to re-examine parenting behaviors on- and offline. A seventh grade variation of the recent and shocking FBI college sting, The Gifted School reveals unimaginable behavior that proves painfully and frighteningly accurate.

By Tracy Dobmeier and Wendy Katzman

Welcome to the elite private high school called Elliott Bay Academy, in Seattle, Washington. Tech influencer CEO Alicia Stone has the entire school staff wrapped around her little check-writing finger. As her daughter Brooke begrudgingly finalizes her Stanford early admission application, Alicia will do everything in her power to guarantee her acceptance. Alicia’s long time assistant Maren also has a graduating senior named Winnie. Although she is attending EBA through the good graces and deep pockets of her mother’s boss, Winnie is ranked top in the class. At the same time, PTA commander-in-chief Kelly is confident her offspring Krissie will attain the coveted spot. Cheating, score inflation, backstabbing and bribery are only a few of the crimes these Crazytown overbearing moms are willing to commit. The day one student is mysteriously run off the road in a hit-and-run electric scooter accident, the entire house of cards comes tumbling down. Timely, suspenseful and filled with dark humor, this mama drama will have you on the edge of your seat.

The post ADMISSIONS SCANDAL: BACK TO SCHOOL BOOKS WITH A TWIST appeared first on Florida Keys Weekly Newspapers.