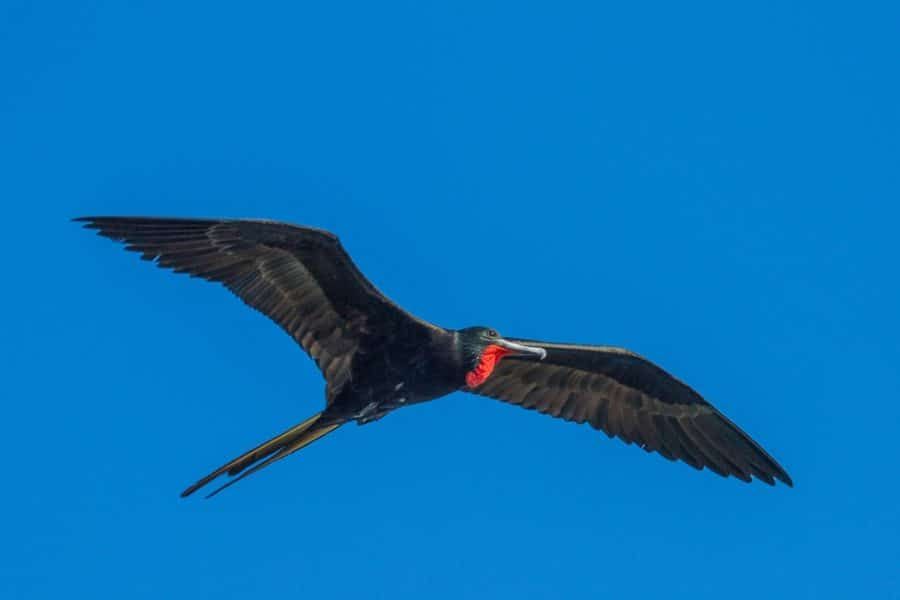 A GLIMPSE OF THE KEYS’ PIRATE BIRD – ONBOARD MAGAZINE

It is hard to think of the magnificent frigatebird as elusive, especially in the Florida Keys where, any time you go out on a boat there is a good chance to see one.

Usually, when you do, it is hanging a few hundred feet above the water, turning wide circles on its 7-foot, slightly M-shaped wingspans. It is up there for the view, monitoring wholesale acres of the ocean’s surface at a time, scanning for either small fish or other birds that are feeding on small fish.

While magnificent frigatebirds may be a near-constant in the Florida Keys skies, they tend to keep their distance. At some point. you notice they are rarely near where you are.

There are two ways, in my personal experience, to get up close and personal with a magnificent frigatebird. The first is to unintentionally catch an undersized yellowtail, then do the right thing and immediately throw it back. Most of the time, if the fish has its wits about it, it will dive down a couple feet and get its bearings, before going on to live the rest of its mysterious and watery fish life. But if the fish is a little dazed, a little worse for wear from the process of being dragged from the hydrosphere where they live into the troposphere where we live, and then summarily tossed back, it might float right near the surface for a minute two, trying to reorient itself.

And sometimes when that happens, somehow, out of a clear, blue sky – one that you’d found completely empty only moments before – a frigatebird will zoom in, pluck up the yellowtail, and fly off with its bounty before you have a chance to say, “Huh? What? Hey!” (magnificent frigatebirds do, occasionally, get caught up in fishing lines.)

The other, arguably more reliable way to see a magnificent frigatebird is to make a trip out to the Dry Tortugas and sit on top of the fort, preferably on the windward side, where the currents of air come across the water, hit the two story wall of bricks, and shoot up, creating the only updraft to be found for miles in any direction. There is a breeding colony of about 100 magnificent frigatebirds just across the anchorage – the only breeding colony in the U.S. – so there is usually a small armada of them, floating there, sometimes drifting a little bit to the left, sometimes drifting a little bit to the right, always just out of reach. There are few birds that can spend so much time in the air with so little effort.

A magnificent frigatebird weighs less than a pound, and it could appear, at half a glance, that they are frail things assembled out of coat hangers and old umbrella parts. But that would be belied by a couple minutes of watching them fly, seeing not only how subtly and effortlessly they can keep their place in midair, but also how quickly and deftly they can pick up speed should they need to chase down another bird.

The chasing down other birds bit is crucial.

Magnificent frigatebirds are flying conundrums. They are pelagic birds, meaning they spend most of their life at sea. (They do come to land to breed, and occasionally you will see one sitting on top of a channel marker or a mangrove.) But they cannot get wet. Their feathers are not waterproof. Too much contact with the water and they will get bogged down and drown.

This leaves them with two feeding strategies – either flying very low over the water and snatching up what they can with their four-and-a-half inch bill, or employing what scientists call kleptoparasitism.

Kleptoparasitism is basically a fancy word for piracy. Frigatebirds will chase down another bird until they give up their lunch. Usually this involves regurgitation, which sounds gross, but it is made slightly less gross by the fact that the fish are usually regurgitated from the bullied bird’s crop, a pouch in the throat that is sort of the vestibule to the digestive tract.

Magnificent frigatebirds are also one of the few seabird species that are sexually dimorphic, meaning you can identify the genders at a glance. The juveniles all have white heads and breasts. The females have clear white breasts. The males are completely black, except for a small patch of skin just below the lower part of their bill called the gulag sac, which is bright red and which they inflate during breeding season to the size of a small party balloon as a way of attacking a mate.

The post A GLIMPSE OF THE KEYS’ PIRATE BIRD – ONBOARD MAGAZINE appeared first on Florida Keys Weekly Newspapers.